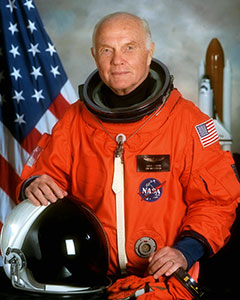 Glenn, John (18 July 1921–8 Dec. 2016), aviator, astronaut, and United States Senator, was born John Herschel Glenn, Jr. in Cambridge, Ohio, the son of John Herschel Glenn, Sr. and Clara Sproat Glenn. The couple subsequently adopted a daughter, Jean. The family moved to New Concord, Ohio shortly after John’s birth where the father established a local plumbing company. Glenn attended local schools, graduating from New Concord High School in 1939. He was an honors student, a member of the band, and played on the varsity football, basketball, and tennis teams. He entered Muskingum College in 1939, where he majored in chemistry.

Glenn’s father took him on his first plane ride when he was eight. As a youngster he was a model airplane enthusiast. He enrolled in the Civilian Pilot Training Program while a student at Muskingum, earning his pilot’s license in July 1941. He left college and enlisted as a Naval Aviation cadet in March 1942. Glenn earned his wings and a commission in the Marine Corps a year later, and he married Anna Margaret “Annie” Castor, his childhood sweetheart, on 6 April 1943. She was, Glenn recalled, “part of my life from the time of my first memory” (Glenn and Taylor, p. 9). The marriage would last a lifetime and produce a son, John David, and a daughter, Carolyn Ann.

Assigned to Marine squadron VMO-155 Glenn flew F4U Corsair fighters on fifty-seven combat missions in the Pacific. Promoted to captain in July 1945 and major in July 1952, he arrived in Korea early in 1953 where he flew sixty-three combat missions in the F9F Panther. Twice he nursed an airplane damaged by ground fire back to his base. In June 1953 he flew the F-86 in combat as an inter-service exchange pilot with the Air Force, shooting down three MiG 15 aircraft in ten days. For his service in two wars, Glenn received the Distinguished Flying Cross with three stars and two oak leaf clusters and the Air Medal with fifteen stars and three clusters.

Glenn graduated from the U.S. Navy Test Pilot School at Patuxent River Naval Air Station, Maryland, in July 1954 and conducted test programs with a variety of aircraft before being assigned to the Fighter Design Branch of the Navy Bureau of Aeronautics. On 16 July 1957 he flew an F8U Crusader 2,445 miles from Los Alamitos, California to Floyd Bennett Field, New York in just over three hours and twenty-three minutes, crossing the nation at a speed faster than a bullet. By the spring of 1959 he had been promoted to lieutenant colonel and had logged almost 9,000 hours in the air.

On 17 December 1958 the newly established National Aeronautics and Space Administration announced plans for Project Mercury, which would carry the first Americans into space. Glenn followed the news of the space program with interest, requesting duty testing a spacecraft simulator at NASA’s Langley Research Center. He then traveled to the Naval Air Development Center at Johnstown, Pennsylvania to participate in centrifuge experiments that subjected him to the forces that an astronaut would encounter in spaceflight. He also advised NASA and McDonnell Aircraft engineers working on a mock-up of the planned Mercury spacecraft.

Glenn was among 110 military aviators who met the preliminary NASA criteria for the astronaut program. He survived rigorous medical and psychological tests to become the oldest of the original seven Mercury Astronauts. An unprecedented wave of publicity washed over America’s first spacemen. Anxious to build enthusiasm and support for their program, NASA officials presented the astronauts as the nation’s representatives in a “space race” with the Soviets. Glenn seemed especially attractive to the media. “It has been said of John Glenn,” one reporter noted, “that he portrayed the most consciously thought-out image of what an ‘astronaut’ should be and how he should behave – in public and private – of any of those chosen for the role” (We Seven, p.11).

Cosmonaut Yuri Gagarin became the first human being to orbit the earth on 12 April 1961. Americans Alan Shepard and Virgil I. “Gus” Grissom made the first sub-orbital Mercury flights in May and July. It was John Glenn’s orbital flight, the first by an American, however, that captured the public imagination. After lengthy delays because of weather and technical problems, Glenn roared aloft in his Friendship 7 spacecraft mounted on the nose of an Atlas rocket at 9:48 a.m. on 20 February 1962. Astronaut Scott Carpenter spoke for millions watching around the globe when he commented just after lift-off: “God speed, John Glenn.” Once in orbit Glenn traveled at an average speed of 17,400 miles per hour, and reached a maximum altitude of 162.7 miles above the earth. After just three orbits a sensor in mission control indicated that the heat shield that would protect the spacecraft during reentry might be loose. The flight director instructed Glenn to reenter without jettisoning the retrorocket pack, which could hold the heat shield in place. After a four-hour fifty-five minute flight, Glenn splashed down safely in the Atlantic.

Glenn returned from orbit to find himself a national hero. “Every move I made—and some I didn’t—was chronicled,” he recalled (Glenn and Taylor, p. 387). New York treated him to a ticker tape parade. He addressed a joint session of Congress, spent time with President Kennedy, who awarded him the NASA Distinguished Service Medal, and began to forge a genuine friendship with Robert Kennedy. In spite of rumors that the White House had decided he was too valuable to risk a second time in space, Glenn remained in the program hoping for a new flight assignment.

In the summer of 1963 Robert Kennedy suggested that Glenn consider running as a Democratic candidate for the US Senate from Ohio. Late that year he informed both NASA and Marine Corps officials that he intended to retire. He announced his candidacy in Columbus on 17 January 1964. His campaign was only a month old when he slipped in his bathroom, hit his head, and damaged his inner ear. Facing a long recuperation, Glenn withdrew from the race. Finally retiring from the Marine Corps as a full colonel on 1 January 1964, he accepted a post as vice president for corporate development with Royal Crown Cola.

Glenn campaigned for Robert Kennedy in 1968, was with him in Los Angeles at the time of his assassination, and served as a pallbearer at his funeral. He sought the Democratic nomination for the US Senate from Ohio in 1970, but lost to Howard Metzenbaum, who lost the election. Glenn challenged Metzenbaum a second time in the 1974 race for Ohio’s second Senate seat, and won both the primary and the election.

John Glenn represented Ohio in the US Senate for twenty-five years. During his first term he served on the Government Operations Committee, the Interior and Insular Affairs Committee, and chaired the Energy, Nuclear Proliferation, and Federal Services Subcommittee of the Governmental Affairs Committee. He joined the Senate Foreign Relations Committee in 1978 and chaired the East Asian and Pacific Affairs Subcommittee. He emerged as a specialist on science and technology issues, focusing on energy policy and nuclear proliferation. He took the lead in drafting the Nuclear Non-Proliferation Act of 1978. During the Carter administration, he took controversial stands against both the B-2 bomber program and the SALT II treaty, which he believed offered too little opportunity for verification.

Glenn campaigned unsuccessfully for the Democratic vice-presidential nomination in 1976. His attempt to capture the Democratic presidential nomination in 1984 failed after a poor showing against Walter Mondale in the Iowa caucuses. He was one of the Keating Five senators accused of intervening in the 1987 investigation of Charles Keating, chairman of the Lincoln Home Savings Association. When Lincoln collapsed two years later, the actions of each of the Senators who had accepted campaign contributions from Keating were suspect. The Senate Ethics Committee exonerated Glenn, but accused him of “poor judgment” in the matter. Of the five senators involved, only Glenn and John McCain ran for reelection. Both won, and Glenn was mentioned as a possible presidential candidate in 1988 and 1992.

Glenn chaired the Committee on Governmental Affairs from 1987 to 1995, and served on the Armed Services and Foreign Relations committees. In 1995, Glenn, now age seventy-three and a member of the Senate Special Committee on Aging, noted similarities between the effects of long duration space flight and aging. He proposed a study that would evaluate the medical impact of space flight on the performance of a septuagenarian. In January 1998 NASA administrator Daniel Golden announced that Glenn would return to space with the crew of space shuttle mission STS-95 in order to conduct such a study. One of his fellow crew members commented that it was “like getting a chance to play baseball with Babe Ruth” (Chaikin, p. 31). During the course of his second space flight, Glenn added eight days, twenty-one hours, and two seconds to his first short stay in space.

After 1996 Glenn served on the Senate Permanent Subcommittee on Investigations. Following his retirement from the Senate in 1999, Glenn cooperated in establishing what would become the John Glenn School of School of Public Affairs at the Ohio State University, where he served as an adjunct professor. He died in Columbus. His body lay in state at the Ohio Statehouse before his interment at Arlington National Cemetery. “On behalf of a grateful nation,” President Obama remarked, “God speed, John Glenn.”

The Ohio State University Archive houses the John H. Glenn Archive. The National Air and Space Museum Archives holds a large collection of articles covering the life and multiple careers of John Glenn in files: CG 3900–01 to 07, 15, and 30 with oversize newspaper material in file CG 3900-OS. John Glenn with Nick Taylor, John Glenn: A Memoir (1999)Find it in your libraryGoogle PreviewWorldCat is the best published biographical source. We Seven (1962) includes Glenn’s own account of his Mercury years. Andrew Chaikin, John Glenn: America’s Astronaut (2014)Find it in your libraryGoogle PreviewWorldCat offers another account of Glenn’s career as an astronaut. An obituary appeared in The New York Times, 9 Dec. 2016.