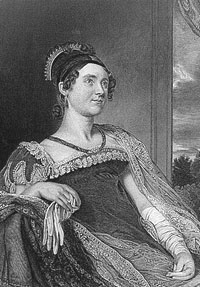 Adams, Louisa Catherine Johnson (12 February 1775–15 May 1852), first lady, was born in London, England, the daughter of Joshua Johnson, an American merchant, and Catherine Nuth (or Young). Though it is known that her father was a prominent businessman and that her uncle Thomas Johnson was the governor of Maryland, her mother’s origins remain obscure. Recent scholarship has tentatively posited that her mother was born out of wedlock and that she may not have married Louisa’s father until after the birth of her older children. In 1778 the family moved to Nantes, France, where Louisa began school and mastered French so thoroughly that when the Johnsons moved back to England when Louisa was eight, she had to learn her native language anew. She and her sisters received the education befitting the daughters of a fashionable London household.

In 1795 the American minister to The Hague, John Quincy Adams (1767–1848), was on a diplomatic mission in London, where he quickly became interested in twenty-year-old Louisa. Their stormy courtship began three months later, when at a ball Adams made his intentions “decidedly publick.” The aloofness and ambiguity of his character often confused and irritated Louisa. In turn, he considered her to have been dreadfully spoiled by her parents. In May 1796 he left for The Hague, putatively engaged to Louisa Catherine but very vague about the future. In their first correspondence he endeavored to school his future wife on the centrality of duty in the republican way of thinking: “Every interest and every feeling inconsistent with it must disappear.” Though for the most part outwardly compliant, Louisa resisted these efforts sufficiently for Adams to reprove her for such a show of “Spirit.”

Eventually, after much pressure from Louisa and her family, Adams returned to London and married her at Tower Hill in July 1797. Shortly afterward her father went bankrupt. The shame of his insolvency and the suspicious timing of her marriage would become the blight of her life and “turn every sweet thing into gall.” She quickly became very depressed and then fell ill, a pattern of emotional distress followed by physical collapse that recurred frequently in her life.

Suffering from the effects of her first pregnancy, Louisa sailed with her husband to Berlin, where he was posted to the Prussian court. Once on shore she miscarried the child and thus began a death-defying reproductive history that included fourteen pregnancies—nine miscarriages, four live births, and one stillbirth. When she recovered she entered court life with zest, outshining her bookish spouse. By the time her husband was recalled to America in September 1801, Louisa had given birth to the couple’s first son, George Washington Adams. But even with the Adams heir in tow, she felt that she had entered a completely alien world when she arrived at the Quincy household. “Even the Church, its forms, the snuffling through the nose, the Singers, the dressing and the dinner hour were all novelties to me,” she wrote. Louisa also recorded that she felt keenly the censure of her husband’s family for being “a fine Lady” who definitely would “not suit.” The only bright spot in the trip, she recalled, was old John Adams (1735–1826), “who took a fancy to me and he was the only one.”

For two years, Louisa kept house in Boston while her husband endeavored to make a living as a lawyer. She gave birth to a second son, John Adams II, later recalling those times as the most pleasant she had enjoyed in America. In 1803 John Quincy was elected U.S. senator. For the next five years Louisa shuttled between her husband in Washington and her children in Quincy, suffering a stillbirth alone in Washington and giving birth to another son, Charles Francis Adams (1807–1886), in Boston. The rawness of Washington society both shocked and intrigued her. She immediately disliked President Thomas Jefferson (he had “a kind of sneaking greatness”) and bewailed the increasing democratization of the republic.

In the summer of 1809 President James Madison (1751–1836) appointed John Quincy plenipotentiary to Russia, an event that Louisa later named as the turning point of her life. Her husband decided that she and their youngest son should go with him but that their two older sons should stay in America. Though usually deferring to him in family matters, this time Louisa fought his decision. He remained firm, however, and she sailed for St. Petersburg accompanied only by her sister Kitty and Charles Francis, whom she later described as “the only one of my children I never deserted.” The family was separated for six long years, a circumstance that Louisa believed caused the early deaths of her two eldest sons. In St. Petersburg, Louisa once again shone at court, winning special regard from the emperor and his wife. She gave birth to a girl Louisa Catherine Adams, in 1811, but the child died a year later. Her husband reacted to this tragedy by retreating further into his books, while Louisa descended into a deep depression, which she attempted to alleviate by writing.

In 1814 John Quincy was called to Ghent to negotiate a peace treaty. While there he received news of a new appointment to London and sent Louisa instructions to join him in Paris. With a strength and bravado that amazed her family, she endured the forty-day carriage ride, coping with thieves, retreating armies, and an angry mob. She and her husband were reunited with all of their children in England, where they spent two idyllic years before returning to America so that John Quincy could accept the post of secretary of state under President James Monroe. Seeing her husband only a step away from the nation’s highest office, but aware of his awkwardness in the kind of social situations that campaigning entailed, Louisa recognized an opportunity to exercise her hard-won political savvy and assumed almost entirely the burden of “smiling for the Presidency.” She turned the task of making social calls—“the torments of my life”—into a science, in one day delivering as many as eleven such calls, covering six square miles.

When her husband was elected in 1824, her job as “campaign manager” ended, leaving her gloomy and depressed. She disliked the White House and grew tired of the “Bull Bait” of politics. When John Quincy suffered ignominious defeat in the election of 1828, she joyfully prepared to quit Washington for the peace of retirement. Her happiness was overshadowed, however, by the death of her eldest son, a possible suicide, as he was on his way to escort his parents from the White House. Five years later her second-eldest son also died after a long, wrenching battle with alcoholism. Another blow was her husband’s decision to return to Washington in 1830 when called upon by district politicos to serve in Congress. Louisa, outraged by his “grasping ambition” and “insatiable passion for fame,” reminded him of the price they both had paid already for his political involvement. In 1825 and 1840 she wrote “Record of My Life” and “The Adventures of a Nobody,” memoirs that portray European diplomatic life and the Washington political scene and give insights into the life of an intelligent, sensitive woman in the late eighteenth and early nineteenth century.

A year after her husband’s death in 1848, Louisa suffered a stroke. She died three years later in her Washington home. On the day of her funeral both houses of Congress adjourned in her memory, making her the first woman ever to receive that honor.

The papers of Louisa Catherine Adams are on microfilm, with those of other members of the Adams family, as part of the Adams Manuscript Trust at the Massachusetts Historical Society. The late editor of the Adams papers, Lyman H. Butterfield, wrote “Tending a Dragon-Killer: Notes for the Biographer of Mrs. John Quincy Adams,” Proceedings of the American Philosophical Society 118 (Apr. 1974): 165–78, in hopes of spurring scholarship about the person he considered “central to the Adams dynasty.” Jack Shepherd provides a colorful account of Louisa Adams’s life in Cannibals of the Heart: A Personal Biography of Louisa Catherine and John Quincy Adams (1980), and Paul Nagel covers many important aspects of her place within the Adams family in Descent from Glory: Four Generations of the John Adams Family (1983) and The Adams Women: Abigail and Louisa Adams, Their Sisters and Daughters (1987). A quick sketch of her life and several illuminating insights are in Katherine T. Corbett, “Louisa Catherine Adams: The Anguished ‘Adventures of a Nobody,’ ” in Woman’s Being, Woman’s Place: Female Identity and Vocation in American History (1979). The person who has produced the most scholarship on the subject is Joan R. Challinor, whose “Louisa Catherine Johnson Adams: The Price of Ambition” (Ph.D. diss., American Univ., 1982), has informed much of the present work. She also wrote “ ‘A Quarter-Taint of Maryland Blood’: An Inquiry into the Anglo/Maryland Background of Mrs. John Quincy Adams,” Maryland Historical Magazine 80 (Winter 1985): 409–19, and “The Mis-Education of Louisa Catherine Johnson,” Proceedings of the Massachusetts Historical Society 98 (1987): 21–48, which reviews the early life of Louisa Adams in great detail.