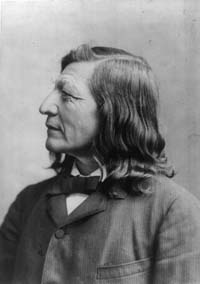 Standing Bear, Luther ( December 1868–19 February 1939), Oglala Sioux chief, author, and actor, was born on the Sioux Pine reservation in South Dakota, the son of Standing Bear, a Sioux chief, and Pretty Face. Reared according to tribal tradition, Luther Standing Bear, named “Plenty Kills” at birth, learned the necessary skills of Plains Indian life. After a trip to Washington, D.C., and a meeting with President Rutherford B. Hayes, however, the elder Standing Bear questioned the Sioux ability to maintain their traditional culture in the face of U.S. expansion. His questions increased when the government tightened restrictions on the Sioux after General George Armstrong Custer’s defeat at the battle of the Little Big Horn in 1876.

In 1879 Luther Standing Bear enrolled in Colonel Richard Pratt’s experimental Indian school at Carlisle, Pennsylvania. Although the elder Standing Bear wanted his son exposed to European-American ways, the younger Standing Bear assented to the plan only to prove his bravery to his father and his people. “I was thinking of my father,” Luther Standing Bear wrote in his autobiography My People the Sioux (1928), “and how he had many times said to me, ‘Son, be brave! Die on the battle-field if necessary away from home.’ The thought of going away with what was to us an enemy, to a place we knew nothing about, just suited me. My idea was that I was leaving the reservation to do some brave deed.” Although Pratt’s school was underfunded and ill prepared for boarding students, it did have a clear objective. Luther Standing Bear and his fellow classmates were, as he recalled in an American Mercury article, “to be made over into the likeness of the conqueror.” Toward this end the school gave students European-American clothes, haircuts, and names—the latter selected at random from a list on the blackboard. When the young Standing Bear approached the board to choose his name, he later recalled, “I took the pointer and acted as if I were about to touch an enemy.” The one he happened to touch was “Luther.”

The Carlisle school implemented a single-minded curriculum. Introduced to the rudiments of a Western education, Indian students spent most of their time learning a semiskilled trade—Luther’s was tinsmithing—and a market-oriented work ethic. During the summer the school assigned Indian students to live with whites to reinforce the discipline. Although Luther originally saw the school as an enemy, he quickly acclimated and became one of Pratt’s success stories. In 1882, for example, Pratt sent Luther Standing Bear back to the latter’s native Sioux on a recruiting trip for the Carlisle school. The next year Pratt promoted his school’s success by arranging for Luther to work in John Wanamaker’s famous department store in downtown Philadelphia.

After his experiences in Pennsylvania, in 1884 Luther Standing Bear returned to the Sioux reservation, where he became an assistant teacher, merchant, and substitute for the Episcopal missionary—having been baptized in the Episcopal church during his Carlisle years. Shortly after returning to the reservation Standing Bear also married Nellie DeCory, and in 1887 they had their first child, whom they named Luther. Although living on the reservation in 1890 at the height of the Ghost Dance movement, Luther and his immediate family remained interested but uninvolved observers. Nonetheless, after the massacre at Wounded Knee in December, his “blood boiled.” “I was ready to go and fight then. There I was, doing my best to teach my people to follow in the white men’s road—even trying to get them to believe in their religion—and this was my reward for it all! The very people I was following—and getting my people to follow—had no respect for motherhood, old age, or babyhood. Where was all their civilized training?” he asked. Despite his immediate anger, Luther continued to cooperate with whites, by overseeing the new government school, store, and post office, and serving as the assistant minister on the Pine Ridge reservation.

In 1902 Luther contracted to serve as the interpreter and chaperon for the Indians in Buffalo Bill’s Wild West Show, which was scheduled to tour the British Isles. While in England, Luther not only enjoyed the major cities of England but also gained an audience with King Edward VII. It was also during this tour that Luther’s daughter, Alexandra Birmingham Cody Standing Bear, was born. He agreed to continue as the show’s interpreter the next season, but when the show’s train wrecked in 1903, severely injuring Luther, he decided to end his touring duties.

Back on the reservation Luther’s band made him chief in July 1905, but he chose not to remain with his people long after his appointment. Instead he hit the lecture circuit, “determining that if I could get the right sort of people interested, I might be able to do more for my own race off the reservation than to remain there under the iron rule of the white agent.” He fought successfully in 1907 for an allotment of 640 acres and a fee patent that would allow him to sell the land, believing that these would give him the citizenship rights he desired. Also in 1907 he remarried. His new bride was May Splicer, of Mohawk dissent. After selling his land in Bennett County, South Dakota, Luther Standing Bear moved to Sioux City, Iowa, and later to Los Angeles, California, where in 1912 he became an actor.

In 1928 he published, with considerable editorial help from E. A. Brininstool, his autobiography My People the Sioux. Five years later he published a critique of American culture and U.S. Indian policy entitled Land of the Spotted Eagle. Also in 1933 he urged President Franklin D. Roosevelt to sponsor a bill requiring Native American history courses in all public schools. Three years later Luther Standing Bear and Jim Thorpe formed the Indian Actors Association to encourage Hollywood studios to hire more American Indian actors and technical advisers. His efforts in the 1930s suggest that near the end of his life Luther Standing Bear became less accepting of European-American culture. “The white race today,” he wrote in the American Mercury, “Is but half civilized and unable to order his life into ways of peace and righteousness.” Thus he confessed, “I had tried to live a peaceful and happy life; tried to adapt myself and make readjustments to fit the white man’s mode of existence. But I was unsuccessful. I developed into a chronic disturber. I was a bad Indian. I remained a hostile, even a savage, if you please. And I still am. I am incurable.” Thus, Luther Standing Bear personified the American Indian struggle with the pressures of assimilation. In the end, his refusal to assimilate to the larger European-American culture became an inspiration to Native American movements later in the twentieth century. He died in Huntington Park, California, while working on the film Union Pacific.

The Records of the Bureau of Indian Affairs include Luther Standing Bear’s correspondence with government officials. In addition to his autobiographical pieces, My People the Sioux; “The Tragedy of the Sioux,” American Mercury, Nov. 1931, pp. 273–78; and Land of the Spotted Eagle, Luther Standing Bear also published two titles for children: My Indian Boyhood (1931) and Stories of the Sioux (1934). L. G. Moses and Raymond Wilson, Indian Lives: Essays on Nineteenth- and Twentieth-Century Native American Leaders (1985), contains a biographical essay. For more information on the Carlisle school, see Richard H. Pratt, Battlefield and Classroom: Four Decades with the American Indian, 1867–1904 (1964).