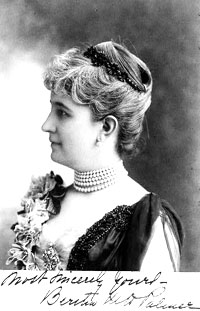 Palmer, Bertha Honoré (22 May 1849–05 May 1918), Chicago society leader and reformer, was born in Louisville, Kentucky, the daughter of Henry Hamilton Honoré, a hardware and cutlery importer, and Eliza Jane Carr. Following Bertha’s sixth birthday the family arrived in Chicago, where her father became a real estate developer and helped to expand the town on Lake Michigan into a bustling city. Religiously affiliated with the Disciples of Christ church in her early years, she later became an Episcopalian.

Educated at St. Xavier’s Academy and Dearborn Seminary in Chicago, Bertha graduated in 1867 from the Visitation Convent School in Georgetown, D.C., one of six students to receive highest honors. Her intense curriculum included studies in ancient and modern geography, chemistry, meteorology, botany, and philosophy. She had an interest in politics, and when the Civil War broke out she joined in patriotic duty by helping her family work for the Sanitary Fairs of 1863 and 1865.

She debuted in Chicago society and attended rounds of concerts, parties, and picnics. Musically inclined, she played the harp and continued to read and study. Men considered her “clever,” but the man who won her heart was Potter Palmer, a Quaker and a wealthy man twenty-three years her senior. They married in 1870. Known as the “first merchant prince of Chicago,” Potter Palmer moved to the city from upstate New York in 1852 and had garnered his wealth in dry goods, real estate, and cotton trading. Upon marriage the couple moved into the recently built Palmer House, which burned to the ground during the Great Chicago Fire of 1871. Also destroyed in the fire were the Grand Pacific Hotel, the Sherman House, and Crosby’s Opera House, all owned by the Palmers. Undaunted, the couple began rebuilding their fortunes and started a family. They had two sons.

As she rose to social prominence in the city, Bertha Palmer opened the doors of her home to celebrities and statesmen as well as factory girls and millinery workers. One of her goals was to elevate the city with artistic and cultural refinements, and she became one of the instigators in Chicago’s “upward movement.” At the Fortnightly, Bertha discussed intellectual and artistic topics with other club members. With her husband, she joined the Contributors’ Club, an association consisting of writers and patrons that had its own magazine for members’ literary productions. The Palmers also aided the artistic side of the city with contributions to the Chicago Academy of Design. Her interest in art led to her association with painter Mary Cassatt, who advised her to begin buying French Impressionist art of Degas, Renoir, and Monet, which she did in the late 1880s. Palmer willed many of these paintings to the Chicago Art Institute upon her death.

Interested in philanthropy and reform, Palmer sponsored the annual charity ball and joined the Chicago Woman’s Club, where she encouraged other members to participate in rejuvenating the city. Always a visible figure, she arrived at Jane Addams’s Hull-House in furs and feathers to attend meetings. A supporter of unions, she often held meetings of the Women’s Trade Union League in her home and helped in the successful organizing of Chicago millinery workers. Between 1892 and 1896 she pursued the increasing opportunities for women’s education as a trustee of coeducation at Northwestern University. Although not completely against woman suffrage, she detested the militancy of the movement.

Palmer’s talents at organization were evidenced during the 1893 World’s Columbian Exposition held in Chicago. In her role as chairman of the Board of Lady Managers of the World’s Columbian Exposition, she laid out plans for a Woman’s Building, which she intended to be an exclusively female project so as to elevate the status of women. Palmer oversaw the operations and commissioned a woman architect to design the building. Mary Cassatt painted murals along with other female muralists. Other interior motifs were completed by women sculptors, painters, wood carvers, and decorators. Also in evidence were many labor-saving inventions, such as the first gas range, to help in domestic duties.

In her dedication speech of the Woman’s Building, Palmer protested against the treatment of women that kept them inadequately educated, poorly paid, and in forced dependence. After the exposition Palmer took the cause of women workers much more seriously, expanding her views to worldwide problems and sometimes demonstrating a sympathetic view toward socialism.

Following the world’s fair, Palmer accepted a position for a short term as vice president of the Chicago Civic Federation (later the National Civic Federation), which organized to clean up Chicago’s vice-ridden areas and do away with corruption. In 1900 President William McKinley appointed her to represent the United States as the only woman on the board of commissioners to the Paris Exposition. A staunch Democrat, Palmer campaigned for her son Honoré Palmer in his successful bid for city alderman in both the 1901 and 1903 elections.

After the death of her husband in 1902, Palmer traveled, spending most of her time in London and Paris until she bought property in Florida. She moved to Osprey near Sarasota in 1910. Until her death in Osprey she pursued an active life of overseeing the farming, growing citrus fruits, and breeding cattle on her ranch, which she called “The Oaks.” By the time of her death she had doubled the fortune her husband had left her. Once called the “nation’s hostess” and an unofficial goodwill ambassador for the United States, Bertha Honoré Palmer’s wealth enabled her to help those less fortunate than she.

Bertha Palmer’s papers are located at the Chicago Historical Society and the Sarasota County, Fla., Historical Commission. A biography of her was written by Ishbel Ross, Silhouette in Diamonds: The Life of Mrs. Potter Palmer (1960). World’s Columbian Exposition materials on Palmer are in Addresses and Reports of Mrs. Potter Palmer (1894). Other information is in Dixon Wecter, The Saga of American Society (1937); Bernard Duffey, The Chicago Renaissance in American Letters (1954); Bessie L. Pierce, A History of Chicago, vol. 3 (1957); Hugh D. Duncan, Culture and Democracy (1965); David Lowe, Lost Chicago (1975); Emmett Dedmon, Fabulous Chicago (1981); June Skinner Sawyers, Chicago Portraits (1991); and Donald L. Miller, City of the Century: The Epic of Chicago and the Making of America (1996).