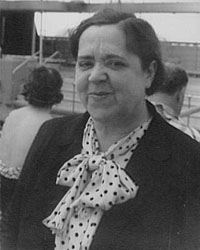 Maxwell, Elsa (24 May 1883–01 November 1963), international hostess, songwriter, and newspaper columnist, was born in a theater box during a touring company’s performance of Mignon in Keokuk, Iowa, the daughter of James David Maxwell, an insurance salesman and part-time journalist, and Laura Wyman. Her childhood was spent in a modest flat situated among the elegant homes on San Francisco’s Nob Hill. A disappointment there at age twelve may have influenced her later party giving. A neighbor, the wealthy senator James G. Fair, hosted a gala party for his daughter Theresa; Maxwell watched the preparations from her window with great anticipation. When her mother announced that the Maxwells were not invited because they lacked the proper social background, the young girl was bitterly unhappy.

Although Maxwell had less than two years of formal schooling, her father taught her to read when she was five and gave her access to his large library. Because he was the West Coast theater critic for the New York Dramatic Mirror, he also took her to many concerts and plays. Exposed to quality music at an early age, Maxwell discovered that she could play the piano by ear, a talent that later helped her gain access to fashionable society.

When her father died in 1905, Maxwell and her mother were left poor. After the great earthquake of 1906 Maxwell’s opportunities in her hometown were rather limited; she therefore joined a touring Shakespeare company headed by the actress Constance Crowley.

In March 1907, stranded in New York City at the close of the company’s tour, Maxwell took a job playing piano in a nickelodeon theater. She also performed at private parties, sold her first song, “The Sum of Life,” for ten dollars, and at one such party, given by the actress Marie Doro, met Dorothy Toye, a vaudevillian singer with a multi-octave voice that was much in demand. Toye hired Maxwell as her accompanist for a South African tour. When Toye left for England, Maxwell could not afford to travel with her until Doro sponsored Maxwell’s passage; the two women were reunited in London in 1908. Their subsequent tours took Maxwell back to South Africa in 1909, where she stayed on alone, performing and writing for the State, a magazine.

Aboard ship in 1912 Maxwell met Dorothy “Dickie” Fellowes-Gordon, a wealthy Englishwoman who would be a lifelong friend and benefactor. The two women roomed together in London, where Maxwell began in earnest a songwriting career.

In the summer of 1915, as the war in Europe intensified, Maxwell and Gordon sailed to New York. There Maxwell wrote the music and lyrics for a suffragette opera entitled Melinda and Her Sisters, which opened on 18 February 1916 but was only moderately successful. Her other main interest during this era was to promote the entry of the United States into World War I; she lectured frequently for this cause.

Maxwell also continued to entertain at society parties as an unpaid pianist. She was introduced at one society event to Millicent Hearst (the wife of William Randolph Hearst), who would also become her close friend and benefactor.

As much as she enjoyed New York society, Maxwell was drawn to Paris to witness the peace conference at the end of World War I. In 1919 she had achieved such social acceptance at the Ritz Hotel, where she often resided while in France, that she hosted an elegant dinner there for England’s secretary of foreign affairs, Arthur Balfour. This party, one of her early triumphs, gained Maxwell a reputation throughout England and France as an imaginative and amusing hostess.

Throughout the early 1920s, with Dickie Gordon as her sponsor, Maxwell’s fame increased, especially among expatriates in Paris and English royals. The 1920s were also the years in which she experimented with unique ideas for entertainment. She was particularly fond of costume balls and devised several variations on the standard theme, hosting “come as your opposite” and “come as the person you least like” parties. In 1927 she created some civil disturbances in Paris with her scavenger hunts (a form of entertainment she claimed to have invented). Maxwell also promoted the murder-mystery party. She was very successful at this genre of specialized entertainment, which sometimes took weeks to organize effectively. Her imagination and affable personality made Maxwell an outstanding international hostess: entertaining the bored rich of Europe, she filled a special need. Among her other major occupations during the 1920s were her work to design and promote the Lido in Venice in 1925 and the Le Sporting hotel and casino in Monte Carlo in 1927.

By the fall of 1929, feeling she had been away from the United States for too long, Maxwell returned to New York. The stock market crash and subsequent depression meant fewer grand parties and entertainments and, as a result, Maxwell focused more on lecturing and journalism. In Hollywood during the 1930s she was a script consultant for David O. Selznick. Beginning in 1938 she also acted in five films (both features and shorts) loosely based on her own adventures; none was a success, but she showed herself to be a moderately good comedian in the short Riding into Society (1940).

Maxwell’s stay in Hollywood also launched her career as a syndicated gossip columnist for the Hearst newspapers in 1940. A disagreement with William Randolph Hearst over her liberal political comments led her to quit. She then wrote for the New York Post for about eight years. She later resumed writing for the Hearst papers when Hearst died and his son, William Randolph Hearst, Jr., inherited the newspaper dynasty. Beginning in 1942 Maxwell also hosted a fifteen-minute weekly radio program called “Elsa Maxwell’s Party Line,” on which she interviewed celebrities and repeated gossipy anecdotes from her own social career. This program was at its peak of popularity during the 1940s. A memoir, My Last 50 Years, was published in 1943.

In the years after World War II Maxwell found a new medium in television. When she appeared on “The Jack Parr Show” she was an instant hit with her humorous anecdotes and brash candor. Her autobiography, R.S.V.P.: The Elsa Maxwell Story (1954), was well received. Maxwell herself best summed up her successful career as a hostess in R.S.V.P. In it, Maxwell, who never married or had a home of her own, maintained that her hefty figure and plain facial features had aided her. “There are certain compensations for overweight women,” she wrote. “Men do not suspect them and other women do not fear them as competition.” But above all, it was Maxwell’s imaginative way of inventing herself and her energetic pursuit of amusing others that resulted in her remarkable career as an international hostess.

Maxwell died in a Manhattan hospital.

The extensive profile of Maxwell in Janet Flanner, An American in Paris (1940), is personal and detailed but slightly inaccurate. Maxwell was interviewed by Rose Heylbut for Etude, Aug. 1942, p. 509. An obituary and related article are in the New York Times, 2 Nov. 1963 and 13 Nov. 1963.