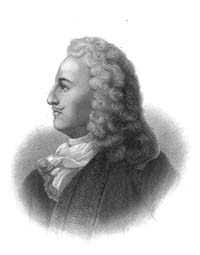 La Salle, René-Robert Cavalier de (21 November 1643–19 March 1687), explorer, was born in Rouen, France, the son of Jean Cavelier, a haberdasher, and Catherine Geest. The family was part of the prosperous bourgeoisie. The sobriquet “de La Salle” referred to an estate they owned outside Rouen. La Salle’s initial intention, however, seems to have been to escape his position, for after having studied with the Jesuits in Rouen, he renounced any claim to the family fortunes and entered the novitiate for the order in Paris in 1658. He actually took vows in 1660, continued, apparently rather brilliantly, his studies of mathematics, and taught in Jesuit schools until 1666. Having requested missionary assignments several times and been denied because he had been unable to demonstrate spiritual maturity and submission to the discipline of the order, he was released from his vows in 1667 and only a few months later went to New France, penniless but with many influential connections. There his brother, a Sulpician, was doubtless responsible for his obtaining from that order a grant of a seigneury on Montreal Island, but after two years La Salle sold most of it back to them and began his career of exploration by attaching himself to the Dollier and Galinée missionary party bound for the western Great Lakes. Hearing of the Ohio River from Iroquois Indian guides, he left the party, claiming illness, and virtually disappeared for four years.

What precisely he did between 1669 and 1673 is unknown, although it was probably no more mysterious than what hundreds of other French voyageurs were doing in the interior: trading for furs. His subsequent familiarity with the whole Great Lakes region suggests this, as do his routine yearly visits to Montreal, where he communicated with Governor Jean Talon and dealt with finances. Claims have been made for his having “discovered” the Ohio and even the Mississippi during this time, but if he did so he never personally advanced such a claim.

Returning to Montreal in early 1673, La Salle became allied with the new governor, Louis de Buade de Frontenac, for whom he carried out errands to the Iroquois. During a sojourn in France in 1674–1675 he obtained letters of nobility and a grant of proprietorship of a fort on Lake Ontario, which he renamed for the governor. To expand his plans for a fur-trading empire, he returned to France in 1677–1678 and obtained a license to construct forts at Niagara and south of Lake Michigan and to explore the entire western region of North America, with certain rights to the fur trade in areas he could settle and organize.

La Salle’s first efforts to carry out this imperial design met with setbacks. In 1679 he built a ship, the Griffon, below Niagara to be used to transport furs from the hinterlands of the western Great Lakes, sending his new lieutenant Henri de Tonti and others westward to organize the collection of furs. Large stocks of peltry were gathered at Detroit and Green Bay, and the Griffon was sent back to Fort Frontenac while La Salle and Tonti went with a party southward down Lake Michigan to the Illinois River, where La Salle built Fort Crèvecoeur. He left Tonti in charge when he started in March 1680 for Fort Frontenac.

La Salle arrived to find that the Griffon had disappeared, Fort Niagara was burned, a cargo of Indian trade goods had been lost, and the workmen at Crèvecoeur had deserted when the Iroquois attacked the Illinois tribes. La Salle made another trip to the Illinois country in late 1680–1681 and then returned to Montreal to consult with Frontenac. From that meeting he emerged with the resolution to make the voyage of discovery down the Mississippi.

The expedition itself is perhaps most notable for its lack of exciting events. Departing in mid-February of 1682 from the mouth of the Illinois River, the expedition, consisting of twenty-four Frenchmen and twenty-five Indians, reached the Gulf of Mexico on 7 April and executed a formal French claim to the Mississippi Valley on 9 April, having established peaceful relations with the Chickasaw, Quapaw, Taensa, Natchez, and Koroa Indians along the way. There was one hostile encounter with the Chitimachas and some tense moments with the Natchez on the return journey, but the venture was more seriously marred by La Salle’s falling ill between the Quapaw villages and the Chickasaw Bluffs. Father Zenobius Membré stayed to nurse La Salle while Tonti was sent ahead to carry news of the discovery of the mouth of the Mississippi. La Salle eventually traveled to meet Tonti at Michilimackinac, but he soon returned to the Illinois country. There he established Fort St. Louis at Starved Rock in the winter of 1682–1683 to serve as a fortified settlement for the Indians of the region against the Iroquois. In the interim Frontenac had been replaced by La Salle’s enemy Antoine Le Febvre de La Barre, and Tonti was left to hand over the forts to the new governor’s men as La Salle returned to France in the autumn of 1683 to obtain permission to establish colonies to make good the claim to the Mississippi and provide a frost-free port for the fur trade.

La Salle was pursued in France by La Barre’s accusations that his explorations had been fruitless and his actions responsible for Iroquois uprisings. But La Salle had his own allies, the abbé Claude Bernou and his circle, and with their help he adapted the schemes of the Spanish deserter Diego de Peñalosa to argue for a settlement at the mouth of the Mississippi as an ideal base of operations for an attack on the Spanish mines of northeastern Mexico. Whether La Salle actually believed that the mouth of the Mississippi was in the vicinity of that of the Rio Grande or falsified evidence to make it seem so, in the end he staked his life on that belief.

In April 1684 La Salle received from Louis XIV command of the whole region between the Illinois country and Mexico and set out with ships and men to reach the coast of the Gulf of Mexico to make a settlement. The expedition included 100 soldiers and their officers, six missionaries (including La Salle’s brother the Sulpician Jean Cavelier and Father Membré), nearly fifty indentured workers, and more than twenty other volunteers, including a few women and children. La Salle’s constant quarrels with Tanguy Le Gallois de Beaujeu, captain of the convoy’s warship, eventuated in the loss of one ship and the expedition’s supplies to Spanish pirates near Santo Domingo. The convoy landed at Matagorda Bay on the coast of Texas in mid-February 1685. After a final quarrel Beaujeu returned to France, leaving La Salle and some 180 people to build a settlement and to continue the search for the Mississippi.

The story of La Salle’s efforts to find the Mississippi, which lasted nearly two years, is known to us through the account of Henri Joutel, La Salle’s closest assistant. Much of the interior of east Texas was explored but without finding what was sought. Supplies dwindled, the last small ship was lost, people died of illness, and some were killed by Indians. As the search apparently grew more hopeless, morale plummeted. La Salle pushed his men deeper and deeper into the interior, and finally members of the expedition turned on one another. La Salle himself was shot to death somewhere in east Texas by Pierre Duhaut as he led yet another party in search of the Mississippi. Some of the survivors of this party, those involved in the killings, remained among the Indians, while the rest did in fact reach European settlements, first finding a small French post established by Tonti among the Quapaws, then reaching Fort St. Louis in the Illinois country and finally Montreal. The survivors were sworn to keep La Salle’s death a secret until his brother the priest could collect his debts. The tiny colony left behind on the coast was attacked by the Karankawa Indians, who spared and adopted several children later found and rescued by the Spaniards.

La Salle is best known for his exploration of the North American interior, and to Americans it is his voyage down the Mississippi that is most memorable. Exploration of the interior was being carried out by many Frenchmen at the time; what was unique about La Salle was his vision of empire over the interior and of a fundamental role for Indians as economic participants in that empire. He and his enterprise attracted “loyal Indians,” not merely outcasts who found a niche with the white newcomers but whole groups that perceived their fundamental place in his vision. He accumulated enemies because he wanted to circumvent the monopoly of the fur trade by Montreal merchants and Iroquois sachems alike, and for the same reason he was important in opening more direct trading contact between Indians of the Midwest and the French.

La Salle’s abortive Texas colony wakened Spain to a serious threat to her unbroken hegemony over southern North America from Florida to California, led to an intensification of both Spanish and British colonial activity in the region, and solidified French resolve to establish a presence there. But it was La Salle’s success in establishing peaceful relations with the Indians who dominated the interior that guaranteed at least temporary French success in this contest.

La Salle himself did not write much that is known to be extant. The first three volumes of Pierre Margry’s standard collection of French documents on the early exploration of North America, Découvertes et établissements des français dans l’ouest et dans le sud de l’amérique septentrionale (1876–1886), are devoted to La Salle. Included therein are transcriptions (sometimes not very reliable) of the account of the 1682 exploration of the Mississippi by Nicolas de La Salle and of the 1685–1686 journey and its outcome by Joutel. One important account that escaped Margry, by the engineer Minet, is collected, along with other documents relating to the 1685 journey, in Robert Weddle et al., La Salle, the Mississippi, and the Gulf of Mexico (1987).

Francis Parkman, La Salle and the Discovery of the Great West (1879), is the most widely known account of La Salle’s explorations, but it was only in the eleventh and later editions that Parkman was able to exploit the information contained in Margry’s documents. Biographies of La Salle include Paul Chesnel, Histoire de Cavelier de La Salle (1901); Roger Viau, Cavelier de La Salle (1960); and E. B. Osler, La Salle (1967), but a definitive scholarly biography has yet to be published. John Vernon’s novel La Salle (1986) represents a striking modern attempt to evaluate the explorer’s motivations. The Jesuit scholar Jean Delanglez published an indispensable group of critical articles in the journal Mid-America in the 1930s and 1940s, many now collected in the reprint volume A Jean Delanglez, S. J., Anthology, ed. Mildred Mott Wedel (1985). A collection of essays edited by Patricia Galloway, La Salle and His Legacy (1982), concentrates on the 1682 voyage down the Mississippi. An important essay by Peter Wood, “La Salle: Discovery of a Lost Explorer,” American Historical Review 89, no. 2 (1984): 294–323, examines the possible motives behind La Salle’s 1685 landfall in Texas.