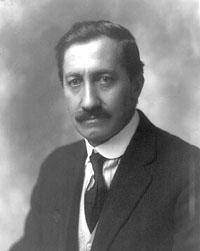 Cook, Frederick Albert (10 June 1865–05 August 1940), first American explorer of both polar regions and first claimant to the discovery of the North Pole, was born in the Sullivan County, New York, hamlet of Hortonville, the son of Theodore Albert Koch, a German immigrant physician (the spelling of whose name was changed by an immigration clerk), and Magdalene Long. Cook’s father died when he was only five years old, and Cook later became breadwinner for his four brothers and sisters, getting up early for a milk route and later working in the Fulton Fish Market after the family moved to New York. Early childhood years were spent in Port Jervis and later Brooklyn, where he attended night classes. In 1885 he entered the College of Physicians and Surgeons, graduating with an M.D. from New York University College of Medicine in 1890.

Cook married Libby Forbes in 1889, and the next year she died in childbirth. The loss of his wife and infant son prompted him to respond to an advertisement placed by a young naval civil engineer, Robert E. Peary, who sought a surgeon for his North Greenland Expedition in 1891. Over the next two decades, Cook would earn a reputation as a doctor afield, interrupting a sporadic medical practice to offer himself as surgeon or leader of eight expeditions “Poleward,” a term he often used.

On the North Greenland Expedition Cook earned Peary’s praise for “unruffled patience and coolness in an emergency.” Cook interrupted his medical practice twice more in Arctic expeditions on the Zeta (1893) and the Miranda (1894), which were essentially pioneer Arctic “cruises,” backed by sportsmen and intended to raise funds for future expeditions.

When an iceberg struck the Miranda, the 29-year-old Cook navigated an open boat across ninety miles of polar sea to obtain rescue. The Arctic Club of America was born out of this voyage, and Cook became its second president. He would later preside over the prestigious Explorers Club as well. Cook was married again in 1902, to Marie Fidele Hunt, the widow of another physician; she had a young daughter, Ruth, after whom he named McKinley’s largest glacier. They later had another daughter, Helene, who in later years would champion her father’s cause.

After a four-year stint of practice and lecturing, the polar quest drew him again, this time as surgeon of the Belgian Antarctic Expedition. The party became locked in the antarctic ice of the Bellingshausen Sea, and its survival was largely attributed to Cook, who was later knighted by the king of the Belgians. Roald Amundsen, the first mate, credited Cook with “unfailing hope and unfaltering courage” in his scheme to free the ship. Amundsen, who would later win the race to the South Pole, in his 1926 autobiography lauded Cook “as the most honest and most dependable man I have ever known.”

Returning to the Arctic as surgeon on Peary’s 1902 relief expedition, Cook was convinced that the so-called American route through Kane Basin along the west coast of Greenland was unsatisfactory because of open water and excessive ice barriers. In any event, he would never again serve under Peary because of differences that emerged during the earlier Greenland expedition.

Polar historians such as Jean Malaurie contend that Peary first saw Cook as a serious rival dating to 1891. Soon Cook mounted expeditions to Alaska’s Mount McKinley, being the first to circumnavigate it in 1903 and making what he claimed to be the first ascent of North America’s highest peak in 1906. At a dinner sponsored by the National Geographic Society—with a seething Peary in attendance—Alexander Graham Bell hailed Cook as the conqueror of McKinley and the first American to explore both polar regions.

None of Cook’s first seven expeditions ventured into the Queen Elizabeth Islands in Canada’s Northwest Territories, but his eighth—his longest, most celebrated, and most controversial—took him into that region for two years. He chose this route because of the game lands found there by the Norwegian explorer Otto Sverdrup. He sailed north on the schooner John R. Bradley in 1907. Leaving his base camp at Annoatuk in northwest Greenland in February 1908 with Rudolph Francke, his German assistant, nine Eskimos, eleven sledges, and 105 dogs, he followed Sverdrup’s route for the game lands through Ellesmere and Axel Heiberg islands, reached Cape Stallworthy, and went over the sea due north. His last supporting party turned back after three days’ march, and, with two Eskimo companions, Cook fought pressure ridges and ice floes to reach what he determined to be the geographical North Pole on 21 April 1908. “We were the only pulsating creatures in a dead world of ice,” he wrote in his diary.

The return journey was an epic in sledge travel—in terms of pure survival, a classic experience. After living in an ancient Eskimo cave on Devon Island through the polar night of 1908–1909, Cook and his party returned to Greenland. Later he received the adulation of the world, first in Copenhagen, then in New York. He was presented with an honorary doctorate by the crown prince of Denmark. Cook’s wire that he had reached the pole was sent on 1 September 1909; Peary’s announcement followed five days later. The great controversy that began then continued throughout the century.

That Cook’s claims soon were treated with incredulity among both the “geographic establishment” and the public has been cited by some historians as an instance of successful media manipulation and defamation. Malaurie called Cook—in regard to his singular quest—a “Bonaparte on the Ice” but also “the most defamed man in Arctic history.” The result was an almost absolute Peary victory, which labeled Cook an impostor and the greatest swindler in the history of exploration.

Cook spent almost half his life surrounded by such controversy to the extent that his real fieldwork has largely been overlooked. Neglected are his achievements in Antarctica, his first circumnavigation of McKinley, and the 1907–1909 Arctic expedition, which for a half-century would not be equaled for its extent, duration, and rigors of survival. Cook’s unquestioned prior physical description of conditions at the pole and his narrative of then-unknown ice island formations weigh in his favor, providing historical credence to the westward drift of the polar ice.

By 1912 Cook’s supporters had pressed for a congressional hearing of his claims, and the explorer went on the lecture circuit. His book My Attainment of the Pole (1911) outsold Peary’s version, and he continued to gain endorsements from both explorers and politicians. Popular commentators such as Elbert Hubbard wrote in his support. United States entry into World War I shelved Cook’s appeal for hearings, however, and Cook left the country for a journey to Borneo and an abortive expedition to Mount Everest.

In 1917 he prospected for oil in Wyoming. A troubled later life included imprisonment in 1923 for falsely promoting Texas oil lands, although they subsequently produced the largest pool of oil in the United States and formed the basis of several oil fortunes. The enrichment of his litigious investors, however, did little for any public vindication of the explorer. Paroled in 1930 and pardoned by President Franklin D. Roosevelt ten years later, Cook died in New Rochelle, New York. Cook wrote three other books on his expeditions, one published posthumously in 1951.

Cook, writing in 1938, expressed his own personal torment: “few men … have ever been made to suffer so bitterly and so inexpressibly as I because of the assertion of my achievement.” In 1993 an International Symposium on Cook was held at the Byrd Polar Research Center at Ohio State University, with polar explorers and scholars from six nations participating, most favorable to his claims. While controversy continued to swirl around the explorer half a century after his death, the man some termed the “American Dreyfus of the North” now has advocates in science as well as polar history.

The Frederick A. Cook Papers are in the Library of Congress, with a speciality collection at the Sullivan County (N.Y.) Historical Museum. For Cook’s own account, see his first report of the polar quest in My Attainment of the Pole as well as his posthumous narrative of the return journey, Return from the Pole (1951). For an objective biographical study, see Andrew A. Freeman, The Case for Doctor Cook (1960), along with two extensive analytical studies, one by Thomas F. Hall, Has the North Pole Been Discovered? (1917), and a later one by Theon Wright, The Big Nail: The Story of the Cook-Peary Controversy (1970). For more recent assessments, see Russell W. Gibbons, An Historical Evaluation of the Cook-Peary Controversy (1956); Farley Mowat, The Polar Passion: The Quest for the North Pole (1968); and a critical summary by Jean Malaurie, Ultima Thule (1990). An obituary is in the New York Times, 6 Aug. 1940.