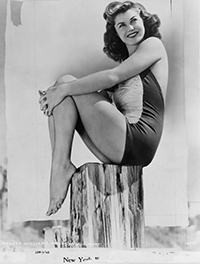 Williams, Esther Jane (08 August 1921–06 June 2013), movie star, swimming champion, and swimwear executive, was born in a small bungalow in Inglewood, a southwest suburb of Los Angeles, the fifth child born to Bula Myrtle Gilpin, a teacher, and Louis Stanton Williams, a sign painter. The family had followed her brother Stanton to Hollywood from Utah, and he appeared as a child star in silent pictures. Esther's mother took no interest in her, and she was raised by older sister Maurine, who taught her to swim. When Esther was eight years old, Stanton died from a burst colon. She hoped to replace his achievements with her own. At age eleven, Esther won a fifty-meter freestyle race at the Olympic Swim Stadium in Los Angeles. When she was sixteen she began swimming for the Los Angeles Athletic Club. During her teens she was repeatedly raped by an orphaned boy her parents had taken into their house. The water became her sanctuary.

After graduating from Washington High School in Los Angeles in 1939, Esther Williams won gold medals in the 100-meter freestyle as well as the 300-meter and the 400-meter relay at the national championship in Des Moines that summer. Her picture appeared in Life magazine. The Summer Olympics of 1940, scheduled for Helsinki, were canceled because of the war, so Williams swam with the Olympic medalist and Tarzan star Johnny Weissmuller at the showman Billy Rose's Aquacade at San Francisco's Golden Gate Exposition. On 27 June 1940 she married Leonard Kovner, a premed student she met while taking classes at Los Angeles City College.

The Metro-Goldwyn-Mayer (MGM) studio chief Louis B. Mayer wanted a swimmer to counter the success of the Twentieth Century–Fox figure skater Sonja Henie. Williams was signed to a contract in October 1941 at $350 a week. She did a publicized tour of military hospitals and became a favorite GI pinup. She shared an underwater kiss with Mickey Rooney in Andy Hardy's Double Life (1942) and played an ingenue in A Guy Named Joe (1943), her first of five films opposite Van Johnson. A stunning seven-minute water ballet in her next film, Bathing Beauty (1944), made her a star. Williams's front strokes, backstrokes, and spirals through circles formed by other swimmers were photographed underwater by a newly developed bucket camera. "No one had ever done a swimming movie before," she explained, "so we just made it up as we went along. I ad-libbed all my own underwater movements" (Hollywood Reporter, 6 June 2013). The film became the third-largest moneymaker in MGM history and helped to invent synchronized swimming.

On 12 September 1944 Williams divorced Kovner. She married the band singer and radio announcer Ben Gage on 25 November 1945. By then her next film with Johnson, Thrill of a Romance (1945), had made $7 million at the box office. Audiences had a hard time taking Williams seriously in The Hoodlum Saint (1946), a million-dollar loser, and Mayer ordered Williams back in the pool. Ziegfeld Follies (1946) and Easy to Wed (1946) were major moneymakers, followed by Fiesta (1947), where for the first time Williams was billed above the title. Williams objected to poor scripts and quipped the only things the studio ever changed were "my leading men and the water in the pool" (Shipman, p. 545). The formula helped make Williams top ten at the box office with an annual salary of $150,000.

Williams had a miscarriage while filming This Time for Keeps (1947), which was quickly followed by On an Island with You (1948). Predictably, both films were big box office hits and disdained by the critics. At five feet, eight inches, Williams was an inch taller and billed above Gene Kelly in the popular Take Me Out to the Ball Game (1949). Her natural on-screen humor with Frank Sinatra, who also starred in the movie, played well with audiences. She was pregnant during the filming of Neptune's Daughter (1949). By the time Frank Loesser's "Baby, It's Cold Outside," a song sung in the film by Williams, won an Oscar for Best Original Song, Williams had become a mother. She had three children with Gage between 1949 and 1953.

"My pictures are put together out of scraps they find in the producer's wastebasket," she said while starring in Duchess of Idaho (1950) and Pagan Love Song (1950) (Parish and Bowers, p. 772). Each film proved profitable and predictable. Texas Carnival (1951) nearly ended tragically. Williams was trapped in a sealed tank and panicked, before finally being freed. She began plotting her career after films, and an April 1951 cover story in Life called her the "Mermaid Tycoon." Williams had a strong business sense and understanding of what women wanted to wear in and out of the pool. In 1950 she signed a merchandising design contract with Cole of California to develop a highly successful line of swimwear for younger women. She created the Esther Williams Collection for older women based on suits she wore in her films. The Delair Group licensed her name for its aboveground swimming pools, which soon filled suburbia.

Million Dollar Mermaid (1952) was Williams's favorite film. Under the musical choreographer Busby Berkeley's direction, the movie featured elaborate sets and costumes and critics praised Williams's portrayal of the real-life Australian swimming star Annette Kellerman. In making a fifty-foot dive into a pool on Sound Stage 30 she broke three vertebrae in her neck and was in a body cast for several months. Feeling in her arms and shoulders returned, but Williams was plagued with headaches the rest of her life. Her film opened at New York's Radio City Music Hall on 4 December 1952 to huge audiences. The following month, Hollywood's Foreign Press Association voted her the world's number one female movie star.

Williams swam with cartoon characters Tom and Jerry in the well-received Dangerous When Wet (1953) and learned to water ski for Easy to Love (1953), shot in Cypress Gardens, Florida. Jupiter's Darling (1955) was her last film at MGM and her only musical to lose money. During her eleven years in the water, she had swum 1,250 miles for the cameras, broken seven eardrums underwater, and made MGM $80 million.

Audiences were reluctant to accept Williams out of the water in four films made over the next five years. She divorced Gage on 20 April 1959. His gambling losses left her nearly $1 million in debt. She worked to pay it off. On the night of 8 August 1960, more than half of the nation's television sets were tuned to NBC's special Esther Williams at Cypress Gardens. In 1966 Williams was inducted into the International Swimming Hall of Fame.

Williams married former costar Fernando Lamas on 31 December 1969, devoting herself to him and her businesses. He died on 8 October 1982. Two years later Williams was guest commentator on ABC's Olympics coverage of synchronized swimming, a sport she had long championed, which made its official debut at the Los Angeles games in 1984. Williams worked with the businessman Edward Bell on the project, and on 24 October 1994 they married.

After turning seventy years old, Williams wrote a bestselling memoir, recovered from a stroke, oversaw her swimwear empire, produced water spectacles, and worked for a favorite charity, helping blind children to swim. Her determination, athleticism, and graceful beauty helped promote the popularity of swimming as sport and recreation. Her pioneering life as a resilient and resourceful woman made her a role model for other women to triumph over the obstacles they faced. She died at her home in Los Angeles at the age of ninety-one.