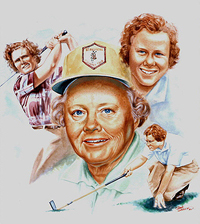 Golf was already central to the Berg household. Her father, a wealthy grain merchant and a member of the prestigious Interlachen Country Club, was a 10-handicapper. He put his rough-edged daughter under the tutelage of the club professional so that she would both internalize the game's tony etiquette and learn to play well. This she did: After shooting 122 in her first competition, she practiced nonstop and won the Minneapolis City Ladies Championship the following year, at the age of sixteen.

Patty Berg's game improved quickly thereafter, accelerated by her father's decision to spend part of the winter in Florida so that she could continue developing her skills. At age seventeen she won the state women's championship and then, remarkably, she advanced to the finals of the U.S. Golf Association (USGA) Women's Amateur before losing a close match to America's greatest woman golfer at the time, Glenna Collett. This breakthrough led to Berg's selection to the Curtis Cup team (pitting the best players of the United States versus Great Britain) in 1936 and then again in 1938â€”the year she also won the USGA Women's Amateur. At age twenty Berg was named Female Athlete of the Year by the Associated Press.

At her father's insistence and with his financial subsidy, Berg gave dozens of golf exhibitions while in high school and college (there was no women's golf team at the University of Minnesota) to raise monies for religious and secular charities. Chaperoned by her parents, she missed the first month of her sophomore year to play thirteen golf exhibitions that raised funds for the university. In California she got to play Pebble Beach, where the 1940 Women's Amateur would be held (she shot 77), and in Long Beach she played an exhibition with the singer Bing Crosby and the pioneer woman golf professional Betty Hicks that drew a crowd of 1,500. Driving hundreds of miles between events and often arriving minutes before tee time, Berg's average score was 76. In two rounds she broke men's par with scores of 69.

In 1940 Berg left college and joined a handful of trailblazing women golfers in turning professional. She signed with Wilson Sporting Goods and was paid a handsome salary to give instructional clinics and exhibitions while hawking the company's merchandise; she also received royalties for clubs bearing her name. During her career Berg would give many thousands of golf clinics and exhibitions for Wilson and also train aspiring women golf professionals in how to do so. She never married.

Berg's role as a teacher of teachers was vital in an era before top women golfers could earn a living by competing in tournaments for significant prize money. To survive financially women professionals had to give innumerable clinics and exhibitions. Berg essentially invented the prototypeâ€”a blend of technical instruction, expert demonstration, and corny humorâ€”for doing so.

Following her recovery from a serious car accident in 1941, Berg joined the U.S. Marine Corps Women's Reserve as a second lieutenant in 1943. Her main job was to give golf exhibitions to promote military recruiting. In 1946 she resumed her golf career with a vengeance, giving two or three clinics per day to satisfy her contract with Wilson. She also won several tournaments, including the inaugural U.S. Women's Open in Spokane, Washington.

Often slighted in favor of her legendary sidekick, Babe Didrikson, Berg's career in golf was, in fact, one of the most stellar and influential in the history of organized women's sports. As one of the top players, her participation was critical to sustaining the inaugural women's professional golf tour, organized by Hope Seignious in 1946. But in 1948, a year after Didrikson turned professional, Berg and she decided to use their collective influence to persuade L. B. Icely, Wilson's CEO, and Fred Corcoran, a former men's professional golf tour manager, to develop a more ambitious, better-funded women's golf tour. This new organization would become the Ladies Professional Golf Association (LPGA), with Berg as president.

Several other excellent players helped spur the growth of the LPGA in the early 1950s, notably Louise Suggs, Betty Jameson, and Betsy Rawls. But it was the Berg-Didrikson rivalry that attracted special attention, especially after the famous cross-country Weathervane Tournament in 1951â€“1952, when Berg bested Didrikson over 180 holes by a single shot to win the unheard-of prize of $5,000.

Many LPGA players resented Didrikson's flamboyant style and self-centered, dismissive attitude toward other women professionals, but Berg never did. A bold personality herself, Berg tolerated Didrikson's eccentricities, ignored her slights, worked effectively behind the scenes with Didrikson (and her husband) to expand the LPGA tournament schedule, and never hesitated to sing "the Babe's" praises for expanding public interest in women's golf.

Still, Berg's recognition as a premier golfer never came close to matching Didrikson's. Even as her golfing proficiency improvedâ€”she compiled the lowest scoring average three times in the 1950s and also led the LPGA money list three timesâ€”she continued to earn her living mainly as a traveling golf instructor and publicist (she also represented the Chicago golf icon Joe Jemsek's St. Andrews Golf and Country Club). This was fine with her. Proselytizing for the game she lovedâ€”giving back, as her father had taught her to doâ€”provided immense personal pleasure, and she exuberantly continued to do so for six decades.

As a player, organizer, teacher, and publicist, Berg was central to making modern golf a viable, remunerative career option for women. During the decades of the mid-twentieth century, her innocent, bubbly enthusiasm mitigated public skepticism of women as paid athletes. As the first president of the LPGAâ€”which continued to be the most successful organization of women athletes into the twenty-first centuryâ€”Berg nurtured a key institutional precedent that helped make gender equity in sports a wedge issue in the civil rights and feminist movements of the 1960s.

However vital her role in creating a secure niche for women in professional golf, Berg's record as a competitor remains the purest testament to her athletic skill. She won fifteen major professional championships and sixty LPGA championships. She was named Female Athlete of the Year three times by the Associated Press (as of 2014, only Didrikson and tennis's Chris Evert claimed the title more). The duration of her career was equally notable: She won her first major title at age nineteen and her last LPGA tournament at forty-four. Few historians of women's golf would object to the judgment of Mickey Wrightâ€”one of the most admired women golfers of all timeâ€”that in the first four decades of professional women's golf, Berg was the greatest player she ever saw. Patty Berg died in Fort Myers, Florida.

Patty Berg wrote two books: Golf (with Otis J. Dypwick, 1941) and Inside Golf for Women (with Marsh Schiewe, 1977). For background on the history of women's golf see Rhonda Glenn, The Illustrated History of Women's Golf (1991); David L. Hudson, Jr., Women in Golf: The Players, the History, and the Future of the Sport (2008); and Nanette S. Sanson, ed., Champions of Women's Golf: Celebrating Fifty Years of the LPGA (2000). See also Robert S. MacDonald and Herbert Warren Wind, comps. and eds., The Great Women Golfers (1994), and Roger Vaughan, Golf: The Woman's Game (2000). Also of interest are Todd W. Crosset, Outsiders in the Clubhouse: The World of Women's Professional Golf (1995), and Liz Kahn, The LPGA: The Unauthorized Version (1996). An obituary appeared in the New York Times, 11 Sept. 2006.