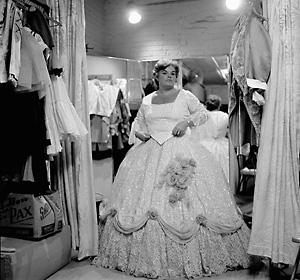 In costume for her role in "Andrea Chénier" at the Metropolitan Opera House, New York, 1962. Photograph by Robert Kradin

Farrell, Eileen (13 February 1920–23 March 2002), singer and educator, was born in Willimantic, Connecticut, the daughter of Michael John Farrell and Catherine Kennedy. Both parents had been vaudeville entertainers, but during Eileen's youth Michael worked as a painter and decorator. Eileen showed some aptitude for music at several Catholic grammar schools and then Woonsocket High School in Rhode Island. Her mother, who gave the girl her first voice lessons, suggested, upon Eileen's graduation in 1939, that she go to New York City for professional training with Merle Alcock, formerly of the Metropolitan Opera. Farrell studied with her for five years but claimed that she learned nothing of value and that Alcock improperly sought to take a percentage of her eventual earnings. Intimidated, Farrell twice returned home but was encouraged to persist. In 1940 an audition was arranged with CBS Radio, and suddenly her career was launched.

Farrell's big voice immediately attracted attention: engineers often asked her to back off from their microphones. By 1941 the twenty-one-year-old singer headlined her own Sunday program, Eileen Farrell Sings. She learned some arias and art songs each week and performed them live on the air. On occasion there was a duet with a young Frank Sinatra. Additional exposure came through CBS's Introduction to Music, directed by the composer-conductor Bernard Herrmann, who introduced Farrell to new repertory, including twelve-tone music from Alban Berg's Wozzeck and Herrmann's own pseudo-operatic aria from Citizen Kane. According to Farrell's memoir, “working at CBS was one giant singing binge” (p. 43). She was on the air for seven years, singing popular as well as classical music and professing no further career ambitions. Encouraged to audition at the Metropolitan Opera, she was initially dismissed as “fat” and “amateurish” (p. 37).

In 1946 Farrell married Robert Reagan, a policeman. Though uneasy around musicians, Reagan proved an effective business manager. The couple had two children and spent many years living modestly on Staten Island. It was Reagan who guided Farrell to break with Alcock and find a new teacher, Eleanor McLellan. Farrell worked with “Miss Mac” for more than fifteen years, during which time the teacher accepted no payment. Farrell's growing fame was sufficient reward, she said. Natural breath support, respect for one's own vocal characteristics, and close attention to words and meaning were the lessons that Farrell took from McLellan and that she later communicated to her own students.

In the late 1940s Farrell transitioned easily to concert and television performing. She became a respected solo recitalist and sang with symphony orchestras under such maestros as Pierre Monteux, Leopold Stokowski, Thomas Schippers, and Leonard Bernstein, as well as on the televised The Bell Telephone Hour. Arturo Toscanini chose her for the soprano part in his recording of Beethoven's Ninth Symphony. Among her several appearances with the New York Philharmonic, initially under Dimitri Mitropoulos, was a unique 1950 engagement at the gigantic Roxy Theatre, where the orchestra repeated a popular program for fifty-six performances. Farrell's rendition of “The Last Rose of Summer” with only harp accompaniment created a unique effect in the six-thousand-seat auditorium. In a sign of her remarkable versatility, Farrell performed and recorded the complete Wozzeck with Mitropoulos the following year, the first recording of this modern opera.

Another side of Farrell's talent emerged in 1953, when she began to sing with the Bach Aria Group. The florid baroque melismas were a new experience for Farrell, who credited this music with lightening her voice and improving her breath control. She toured with the group until the early 1960s, when it could no longer afford star soloists. This separation disappointed Farrell, though it allowed her to spend more time with her family.

During the 1950s Farrell was often on television, singing on The Ed Sullivan Show or clowning with the comedians Milton Berle or Carol Burnett. In 1955 she dubbed Eleanor Parker's singing voice in the film Interrupted Melody, a biography of the Australian soprano Marjorie Lawrence. That same year a concert performance of Luigi Cherubini's Medea in New York was a triumph. Winthrop Sargeant wrote in the New Yorker: “Miss Farrell's voice seemed limitless in power, magnificent in tone, remarkably sure in its command of the classical style, and accurate enough to cope successfully with … the taxing coloratura …” (Sargeant, p. 173). Alfred Frankenstein likened her voice to Niagara Falls, “some unparalleled phenomenon of nature” (p. 174).

Farrell performed in few staged operas. Lacking dramatic temperament, she professed to care for neither the trappings of costume and sets nor the egotistical antics of the professional diva. She made her stage debut in Pietro Mascagni's Cavalleria rusticana in Tampa, Florida, in 1956. A staged Medea followed in San Francisco. At the prompting of press and fans, she was finally invited by the Metropolitan to debut in a new production of Christoph Gluck's Alceste in 1960. She received twenty-two curtain calls. Nevertheless she performed in only a few operas until 1966 and never even visited the Met thereafter. Because she resisted pleas to tackle the great Wagnerian roles onstage, her infrequent concert performances of Wagner achieved legendary status.

By late 1960s, with the retirement of Reagan, Farrell was residing in New Hampshire and traveling only for the occasional tour or recording date. In 1971 she was recruited to teach at Indiana University, which had established a formidable opera theater. Farrell enjoyed teaching and introduced a novel course in jazz singing, but she also experienced conflicts because she withheld her students from demanding operatic roles in order to protect their voices. Faculty tensions, together with rising blood pressure, induced Farrell to quit Indiana midsemester in 1980. She taught briefly at the University of Maine and limited her concertizing and recording activities, making her last record in 1995.

Many of those late recordings of popular or jazz standards by such songwriters as Harold Arlen, Alec Wilder, and Richard Rogers were esteemed as classics. Farrell had sung pop from the start, not differentiating it from classical and spurning the later term “crossover.” In 1960 she released not only sets of Puccini arias and German lieder but also the album I Gotta Right to Sing the Blues, arranged by Luther Henderson. It reached number fifteen on the pop charts. In 1982 she appeared with the singer Mabel Mercer at the Newport Jazz Festival. No classical singer has ever matched her authority in this repertoire.

Following the death of her husband, Farrell retired in Maine and later suburban New Jersey, where she died in Park Ridge.