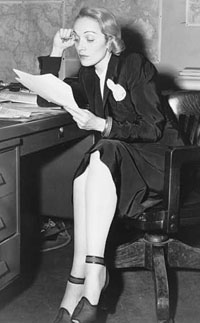 Dietrich, Marlene (27 December 1901–06 May 1992), actress and singer, was born Maria Magdalena Dietrich in Berlin, Germany, the daughter of Louis Erich Otto Dietrich, a policeman, and Wilhelmina Elisabeth Josephine Felsing. Dietrich trained as a concert violinist at the Hochschule für Musik in Berlin, but a hand injury at the age of twenty-one led her to shift her ambitions to acting. She adopted the surname Marlene for her stage name by combining syllables of her first two names.

In 1922 Dietrich auditioned for, but was denied entry to, Max Reinhardt’s acting school in Berlin, so she joined a musical revue for several months until a later successful audition. During the rest of the 1920s she acted in Reinhardt’s stage productions as well as performed occasionally in cabarets and on film. Her first film role was a bit part in Der kleine Napoleon (1923). In 1924 she auditioned for a movie role at Universum-Film Aktien-Gesellschaft (UFA Studios), Germany’s largest film company, where she met Rudolf Emilian Sieber, a casting assistant, whom she married in May. They had one child, Maria, who also became an actress. The couple later separated but never divorced.

By 1926 Dietrich was starring in major stage roles in Berlin and Vienna, including the German production of the American play Broadway. During the remainder of the decade she starred in other plays and films and recorded songs for Telefunken Records. Movie director Josef von Sternberg (who later became her mentor as well as her lover) was so impressed by her stage performance in Zwei Krawatten that he immediately asked her to star opposite Emil Jannings in his movie production of Heinrich Mann’s novel Professor Unrat. Dietrich played the amoral singer Lola-Lola in two versions directed simultaneously by von Sternberg, one in German titled Der blaue Engel and the other in English titled The Blue Angel (1930). The German version had an extremely successful premiere in Berlin on 31 March 1930, and that evening Dietrich left Germany for Hollywood and Paramount Studios.

The English-language version of The Blue Angel was so popular in the United States that Paramount Studios signed Dietrich to a long-term contract. Paramount and von Sternberg unleashed a huge publicity drive that promoted Dietrich as the studio’s answer to Greta Garbo, the popular foreign star under contract to Metro-Goldwyn-Mayer (MGM). By shedding thirty pounds and undergoing the then-novel process of plastic surgery to narrow her nose, Dietrich was transformed from a chubby cabaret showgirl into a svelte Venus. Paramount publicity photos displayed her wearing gorgeous costumes in exotic locales, as did her roles in a series of films directed by von Sternberg, Morocco (1930), Dishonored (1931), Shanghai Express (1932), Scarlet Empress (1934), and The Devil Is a Woman (1935).

The persona created by Dietrich and Paramount paralleled that erected by Garbo and MGM. Both played icy and aloof foreign exotics whose husky voices and occasional cross-dressing hinted at transsexuality. In public Dietrich professed nothing but gushing admiration for Garbo; in private, she was an intense rival and had affairs with several of Garbo’s lovers, including actor John Gilbert and screenwriter Mercedes de Acosta. Dietrich and Garbo met only once, brought together by Orson Welles at a party, after which Dietrich commented to Welles: “Her feet aren’t as big as they say.”

After the success of Shanghai Express, Dietrich renegotiated her contract with Paramount. She received $125,000 per film, making her the studio’s highest-paid star. When disputes over artistic control caused von Sternberg to leave Paramount, Dietrich stayed with the studio. She limited herself to a small number of roles in productions by major filmmakers: Ernst Lubitsch (Desire in 1936 and Angel in 1938), David Selznick (Garden of Allah in 1936), and Alexander Korda (Knight without Armor in 1937). In all of her films she actively perpetuated her film image and insisted on particular lighting and camera angles that would highlight her distinctive appearance.

Dietrich’s movie career began to sag near the end of the thirties. Most of her films after von Sternberg left Paramount were undistinguished. Critics began to complain that her glamour had become stereotyped, and her movie audiences dropped off. In 1938 the Independent Theater Owners of America published announcements in Variety and other trade journals that Dietrich and several other actresses (including Garbo) were no longer popular with their movie audiences. Dietrich publicly assumed a dismissive attitude and told a reporter: “All I know is that whenever the guys in the front office want to pay their mortgage, they call me up with an idea for a picture.”

Her next film, however, embodied a complete change of image in a comedy role in Joseph Pasternack’s western Destry Rides Again (1939). Movie audiences loved her performance as the rowdy dancehall singer Frenchy—a return to her origins in Berlin cabarets—and her unforgettable rendition of “See What the Boys in the Back Room Will Have.” She and Pasternack made several other popular films that bolstered her standing in Hollywood, but she temporarily abandoned her movie career in 1943 to join the United Service Organizations (USO) and entertain American troops overseas.

Dietrich was fervently anti-Nazi and had spurned an offer in 1937 from Adolf Hitler’s propaganda minister, Joseph Goebbels, to return and star in any German film she wanted. Her films were subsequently banned in Germany. Dietrich filed naturalization papers in 1937 and became an American citizen in 1939. When the United States entered World War II, she participated in war bond drives and made anti-Nazi broadcasts in German for Allied radio services. After the Allies invaded Normandy, she paid her own expenses to travel with the USO to the European theater of war to entertain Allied troops, giving more than 500 performances in the years 1943–1946, many times performing near the line of battle. After the war, President Harry S. Truman awarded her the Medal of Freedom and the French government made her a Chevalier of the Legion of Honor.

Dietrich remained in Europe after the war to star opposite Jean Gabin in the French film Martin Roumagnac (1946), which opened in the United States as The Room Upstairs (1948). She then returned to Hollywood to appear in Golden Earrings (1947) and A Foreign Affair (1948). Her appearance in 1950 in Alfred Hitchcock’s Stage Fright was followed in 1951 by No Highway in the Sky; both productions were British, but she returned to the United States for Rancho Notorious (1952).

During the mid-1950s Dietrich temporarily stopped appearing in movies. Although critics had praised her performances, her films were not box-office successes. The movie studios were hurting financially from television’s competition, so they began cutting back on productions and laying off talent. A highly paid star like Dietrich found herself priced out of the movie industry. She began to explore other venues for her performances. In 1952 she hosted two radio series, “Cafe Istanbul” for ABC and then “Time for Love” for CBS, but neither was a success. Dietrich also made several recordings for Columbia Records in 1953 and then, after studying Judy Garland in rehearsals for her one-woman show, embarked on a solo nightclub act. Dietrich debuted at the Hotel Sahara in Las Vegas, Nevada, and went on to appear in New York, London, Jerusalem, and in various other cities around the world. She made only one postwar visit to Germany, where many conservatives considered her a traitor for her wartime work. Nevertheless, her Berlin show was unexpectedly successful and attracted only a few hecklers. She later developed her nightclub act into a full-scale musical revue, opening on Broadway at the Lunt-Fontanne Theatre on 9 October 1967 for a six-week run.

Dietrich still retained an interest in movies and resumed working with independent producers in the late 1950s. She alternated her theatrical tours with appearances in Billy Wilder’s Witness for the Prosecution (1958), Orson Welles’s Touch of Evil (1958), and Stanley Kramer’s Judgment at Nuremberg (1961).

Dietrich moved her residence to Paris in 1972 and made her last stage appearance in a 1975 Australian tour, which ended when she collapsed onstage in Sydney on 29 September 1975 and broke her leg. Thereafter she lived a virtually reclusive life, except for an unusual appearance in a quirky and unsuccessful film directed by David Hemmings, Just a Gigolo (1978). She also provided voice-over narration, but did not appear in, Maximilian Schell’s documentary Marlene (1978). She died in Paris.

No Dietrich papers are available to the public, but portions of her correspondence and other relevant documents are located in the Kurt Weill Papers at the Kurt Weill Foundation for Music in New York City and in the USO Camp Show Publicity Records, Billy Rose Theatre Collection, New York Public Library. Dietrich published two unrevealing memoirs, Marlene Dietrich’s ABC (1962; rev. ed., 1984) and Marlene (1989), but is the subject of numerous biographies, including one by her daughter, Maria Riva, Marlene Dietrich (1993). See also Donald Spoto, Blue Angel: The Life of Marlene Dietrich (1992); Steven Bach, Marlene Dietrich: Life and Legend (1992); and Homer Dickens, The Complete Films of Marlene Dietrich (1992). She is discussed in the autobiography of her early mentor Josef von Sternberg, Fun in a Chinese Laundry (1965), and in that of her lover Mercedes de Acosta, Here Lies the Heart (1960). Dietrich’s role as a sexual icon and her place in popular culture are discussed in Gaylyn Studlar, In the Realm of Pleasure: Von Sternberg, Dietrich and the Masochistic Aesthetic (1988). Obituaries are in the New York Times and the Washington Post, both 7 May 1992, and in Variety, 11 May 1992.