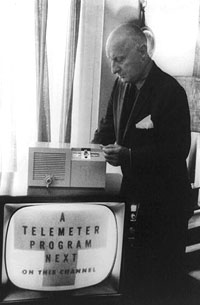 Balaban, Barney (08 June 1887–07 March 1971), motion picture executive, was born in Chicago, Illinois, the son of Israel Balaban, a grocer, and Goldie Manderbursky. At age twelve Balaban began working as a messenger for Western Union, then worked at various jobs until the mid-1910s when he settled as a bookkeeper at the Western Cold Storage Company. With his father, brothers, and a friend (soon thereafter brother-in-law), Sam Katz, Balaban launched the Balaban & Katz movie theater company in 1912. During the next decade Balaban & Katz redefined movie exhibition; the company’s Chicago-based movie palaces became the talk of the film business and enabled Balaban to quit his day job. Thereafter, whenever he worked, Balaban managed the corporation’s books and created many of the principles of modern movie accounting and record keeping.

By 1925, with air-conditioned movie palaces dominating motion picture exhibition throughout Chicago and the surrounding states of Indiana, and Wisconsin, Balaban & Katz ranked as the most successful, most profitable, and most imitated movie exhibitor in the world. That year Paramount Pictures, the largest moviemaking and distribution company in the world, merged with Balaban & Katz and moved Katz to New York City to run the newly named Publix theater empire. Balaban remained in Chicago to run Paramount’s operations there which centered on the score of Balaban & Katz 4,000-seat picture palaces.

Only in 1929, when it was clear that the Paramount takeover had made him a millionaire, did Balaban marry Tillie Urkow; they had three children.

If it had not been for the Great Depression, Balaban might have remained in Chicago, a successful but not-very-famous regionally based movie theater executive. The depression, however, nearly drove Paramount (and its subsidiary Publix) out of business and cost Katz his job. In July 1936 the shareholders of the newly reorganized Paramount Pictures Corporation called Balaban to New York to run the streamlined company. He proved so successful that a decade later Paramount again ranked as the most profitable and powerful of movie corporations. Balaban knew how to take advantage of the good times that returned to the film business during the 1940s.

Throughout the late 1930s, and into the 1940s and 1950s, Paramount Pictures operated a studio in Hollywood, an international network for worldwide distribution, and a chain of nearly a thousand theaters. Indeed, more than any other movie company, Paramount held dominion throughout the U.S. heartland, with theaters in midwestern cities from Chicago to Detroit and towns across the South from Florida to Texas.

Balaban stood at the top of this corporate colossus. To increase cash flow, during the late 1930s he signed up stars from other media—most notably Bing Crosby and Bob Hope—and turned them into box-office giants. Balaban also skillfully milked distribution profits from world bookings, and he introduced buttered popcorn sales to generate greater revenues.

Balaban kept a tight lid on costs. For example, he required his approval of such expenditures as a wig for Crosby to a new popcorn machine for a Peoria theater. With revenues ever rising and costs held down, Balaban’s strategy led to an increasing profitable corporate bottom line and made him the darling of Wall Street. Indeed, in 1946 Paramount Pictures earned a record $39.2 million, a figure unmatched for another generation and never exceeded by a Hollywood company before the coming of television.

By the mid-1940s Balaban had formulated a strategy for producing popular films to fill Paramount Pictures’ theaters. He placed his own man, Y. Frank Freeman, atop the Melrose Avenue studio lot in Hollywood. Thereafter, he and Freeman, through daily phone conversations and regular studio visits, made the movies that throughout the 1940s generated the highest international return of all movie companies.

Balaban and Freeman turned Crosby and Hope into the most popular movie stars of the 1940s. Many observers may not associate Crosby and Hope primarily with success in movies, yet by the measure of box-office receipts their films made Paramount millions of dollars. Crosby starred in Holiday Inn (1942), Going My Way (1944), The Emperor Waltz (1948), and A Connecticut Yankee in King Arthur’s Court (1949). Hope appeared in a series of comedies from My Favorite Blonde (1942) and My Favorite Brunette (1947) to Monsieur Beaucaire (1946) and The Paleface (1948). Together, they became famous for their “Road” movies. Through the 1940s, Crosby’s and Hope’s names on marquees always meant full houses, and Balaban used them—and others, such as Gary Cooper, Betty Hutton, and Ray Milland—to make his company the most profitable in movie history up to that time. Cecil B. De Mille, Billy Wilder, and Preston Sturges, as director-producers, also made Paramount hit after hit.

Balaban did not rely solely on feature films for corporate success. Paramount’s newsreels were considered the best in the business, and its Popeye the Sailor cartoons were highly popular. Critics have never considered these and other Paramount efforts classics to be praised, but Balaban was unconcerned with critical approval. He kept his eye on the box-office take, not on cinematic greatness. As a result, Paramount Pictures maintained its corporate supremacy with films that infatuated fans of the time, although many of those pictures are forgotten today.

Ever a corporate realist, Balaban in 1938 began to consider television as the next new technology for mass entertainment. With his sponsorship that year of DuMont’s developmental efforts, he tried to position Hollywood as the central player in the emerging business. He reasoned that exhibition of special televised events (sports, for example) would simply add to Paramount’s ability to draw customers to its theaters. But World War II called a halt to television experimentation. Balaban did sponsor theater television in the late 1940s, presenting boxing matches and Big Ten college football games. Revenue rarely exceeded costs. During the 1950s Balaban sponsored pioneering experiments with pay-TV at home. Again, revenues never exceeded costs. He was ahead of his time, since such companies as Home Box office would not make a success of pay-TV until the late 1970s.

In 1948 the U.S. Supreme Court forced Paramount to sell its theater chain, and the studio began a period of trying to adjust as simply a studio producer and distributor. Balaban innovated VistaVision, a wide-screen process, and sold Paramount’s inventory of movies to advertising-based television, and he labored to make Paramount a television production factory that would feed the networks. It was not that he did not see television coming; he simply could not figure out a way to dominate the industry as Paramount Pictures had long dominated the film business. But in the early 1960s Paramount’s bottom line began to turn red, and so Balaban retired. His stepping down placed Paramount “in play,” and, after a great deal of corporate struggle, the company in 1966 was taken over by Gulf + Western in the first of what turned out to be the complete remaking of Hollywood ownership by conglomerate absorption.

Although he has largely been forgotten by an industry he led for a generation, Balaban made significant contributions to the development of the motion picture business. In the 1920s he and his associates taught the world how to make moviegoing a mass cultural activity by locating theaters near middle-class areas, building opulent picture palaces, creating magnificent live stage shows, and innovating air-conditioning. But he made his greatest contribution by fashioning movie companies into streamlined businesses, aping modern management techniques of other industries and producing a sound corporation that Wall Street praised and heavily funded. In short, Balaban was among the handful of individuals who fashioned the movie corporate enterprise we take for granted today.

Barney Balaban left no papers and wrote little for the public record. Thus, the institutions that he helped build must be examined through more general works. The rise of Balaban & Katz is described and analyzed in Douglas Gomery, Shared Pleasures (1992). For his brother’s view of what happened, see the privately published Continuous Performance (1942), written by his brother A. J.’s wife, Carrie. Also consult John Douglas Eames, The Paramount Story (1985), and I. G. Edmonds and Reiko Mimura, Paramount Pictures and the People Who Made Them (1980). For the place of Paramount in the Hollywood film industry, see Gomery’s The Hollywood Studio System (1986). For a detailed account of how Barney Balaban lost Paramount, see Robert Sobel, The Rise and Fall of the Conglomerate Kings (1984).