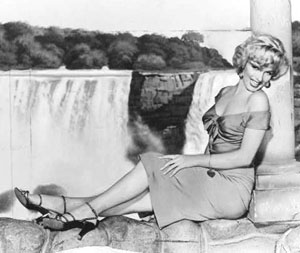 Monroe, Marilyn (01 June 1926–05 August 1962), film actress and sex symbol, was born Norma Jeane Mortensen (and was also known as Norma Jeane Baker in her youth) in Los Angeles, California, the daughter of Gladys Monroe Baker Mortensen, a film cutter, who was unmarried when she gave birth to Monroe (her father has never been positively identified). Gladys Mortensen was an avid movie fan, but Monroe spent very little time with her often unstable mother. Within two weeks of her birth, Monroe was placed in the first of what would be a succession of foster homes, guardianships, and orphanages. This experience convinced her that she was a “mistake,” a person easily abandoned. Given an insecure childhood that included the trauma of sexual molestation and an early marriage (to James Dougherty in 1942; they were divorced in 1946) arranged in part to prevent her return to an orphanage, it is a testament to Monroe’s tenacity, personal strength, and resilience that she managed to achieve the heights in her career that she did.

Her marriage to Dougherty compelled Monroe to quit high school, and her lack of formal education furthered her sense of inadequacy. While her husband served in the merchant marine during World War II, Monroe found a job inspecting parachutes at the Radioplane Company (1944–1945). Army photographers who had arrived at the plant to take commercial and military pictures of female war workers discovered her. From this first successful posing arose Monroe’s fabled “love affair” with the camera (particularly with still photography). She was sensual and at ease before the camera, and her direct sexuality—mingled with her beauty, her innocence, and her now lightened blonde hair—accounted for her popularity with photographers and filmmakers.

At age twenty Monroe had her first screen test, signed a contract with 20th Century–Fox, and adopted her stage name of Marilyn Monroe (she legally changed her name in 1956). Roles were few, though, and her contract was not renewed. It has been suggested that she became a prostitute in order to support herself and that she at times engaged in sexual affairs with men who could advance her career. Through her judicious selection of “contacts,” Monroe landed a new contract with Fox in 1948, but her first noticeable roles did not reach the screen until 1950.

Although typecast as the “dumb blonde,” an unfair stereotype that bothered her throughout her career, Monroe transcended the limitations of her image in The Asphalt Jungle (1950) and All About Eve (1950). Working with two of the most lauded directors of the era, John Huston and Joseph Mankiewicz, she brought humanity and intelligence to her small roles in these films. Even though the studio did not consider her a serious actress, Monroe signed a seven-year contract with 20th Century–Fox in 1951. Her grossly underpaid bondage to Fox became symbolic of the many exploitative qualities of the studio system. Monroe nonetheless continued to overcome the deficiencies of her roles, and three films showcased her dramatic abilities: Clash by Night (1952), Don’t Bother to Knock (1952), and Niagara (1953). In Clash by Night and Niagara, Monroe played darker, more demanding roles. Her Rose Loomis in Niagara is a steamy, cheating wife intent on murdering her veteran husband. In Don’t Bother to Knock she portrays a psychotic babysitter.

Such “dangerous” sexuality in Monroe’s acting was, however, all too often domesticated. Her sensuousness, independence, and intelligence were tamed once again in the role of the dumb blonde, a part she nonetheless played with sensitivity in Gentlemen Prefer Blondes (1953). The film, perhaps Monroe’s most famous, features her as Lorelei Lee, a beautiful but dim golddigger, who sings what became Monroe’s trademark song, “Diamonds Are a Girl’s Best Friend.” Monroe infused life into this femme fatale stencil, mocking the sexual greed of “Diamonds” and offering a commentary on postwar male American expectations in her line “I can be smart when it’s important, but most men don’t like it.”

In the early and mid-1950s Monroe became one of the most publicized and popular actresses in America, her sexuality and vulnerability proving to be a potent and attractive mixture. She actively involved herself in her own image making and publicity, turning events from her private life to her professional advantage. Her relationship with baseball icon Joe DiMaggio created a great stir in the press (they were briefly married in 1954), as did the revelation of Monroe appearing nude in photographs for a 1952 calendar. Monroe had posed for the calendar shots when she was the proverbial starving actress, and she openly admitted this to the press, effectively forestalling criticism and in fact creating more sympathy for herself as a waif-like star. Despite Monroe’s popularity and visibility, the studio still forced her to play parts she considered less than rewarding, usually rehashes of the dumb blonde role, including her parts in There’s No Business Like Show Business (1954) and The Seven Year Itch (1955).

In The Seven Year Itch, Monroe plays a character significantly named “The Girl,” and this film thus embodied much of what defined Monroe as an abstract sex symbol. The object of a married man’s fantasies and desires, The Girl represents an honest and delighted sexuality—which she revels in as she stands over a subway grate and the cool air billows her white skirt around her thighs. This vision of Monroe created a lasting impression on the American psyche, but it remained wedded to the type of role she increasingly disdained. (The scene also precipitated the Monroe-DiMaggio divorce; DiMaggio, never accepting of Monroe’s status and career, became incensed at her public display and reportedly beat her afterward.)

After filming The Seven Year Itch, Monroe broke her contract with 20th Century–Fox and attempted to mature into a more serious actress. She made only five more films, and her life from 1955 to 1962 proved how far removed she was from the stereotype she so often portrayed. Her intellectual aspirations found expression in her dedication to acting lessons, guided by the coaches famous for “the Method,” Paula and Lee Strasberg. She sought companionship and, one suspects, a sort of apprenticeship with playwright Arthur Miller (whom she married in 1956 and divorced in 1961). A finely tuned sense of political morality also emerged from Monroe during these years. She stood by Miller throughout his ordeal with the House Un-American Activities Committee, risking her reputation and career to combat the committee’s unseemly challenges to First Amendment rights in its pursuit of “communist corruption” in the arts. She likewise spoke out against the terrors of the Atomic Age, supporting the National Committee for a Sane Nuclear Policy and saying to reporters, “My nightmare is the H-bomb. What’s yours?”

Monroe lent her prestige to such political causes, but her attention remained riveted on the further development of her career and on her personal life. Monroe offered some of her finest performances in the late 1950s and early 1960s, particularly in Bus Stop (1956), Some Like It Hot (1959), and The Misfits (1961). Increasingly, however, her personal problems interfered with her career. Long perceived as a “difficult” actress (for her tardiness, her terror of live filming, and her reliance on drugs, barbiturates in particular), Monroe’s troubles worsened during this era. They were not the peevishness of a movie star, and the solutions she chose were grounded in the culture. She had chronic gynecological problems that often accounted for her absence from the set and that in all likelihood prevented her from having the child she so desperately wanted (she had a number of failed pregnancies during these years). Her fears stemmed from her childhood and from the excessive expectations attached to a sex symbol and superstar. She resorted to psychotherapy and drugs, which did little to relieve her anxieties or alleviate her problems. Monroe was forced to live out these agonies in her own life as well as on film in The Misfits, where her failed marriage to Miller was torturously recorded.

For all her difficulties, Monroe at the end of her life demonstrated the same sort of resilience that she had as a child. She wrought wonderful images in her last films through all her trauma, and she had plans for reordering her life and for new film projects when she died of a drug overdose at her home in Brentwood, California. Controversy has surrounded Monroe’s death, and the initial finding of suicide has become increasingly suspect in recent years. While some sensational but widely accepted theories focus on Monroe’s reputed involvement with John F. Kennedy and Robert Kennedy and the Mafia to suggest murder scenarios, her biographer Donald Spoto rather persuasively exonerates the Kennedys (she had only a brief fling with President Kennedy and had a strictly platonic relationship with Robert Kennedy) and lays the blame on her physicians and helpers. According to this theory, Monroe was accidently killed by a drug overdose (Nembutal ingested by mouth combined with a chloral hydrate enema) administered on the orders of her psychiatrist.

In Monroe’s last interview with the press, she pleaded with Life magazine writer Richard Meryman, “Please don’t make me a joke.” The often bizarrely explained circumstances of her death and her image as a sex goddess/dumb blonde have at times prevented Monroe from being perceived as more than a caricature. She was, however, much more, and even in those “dumb” roles she displayed an elegance worthy of respect. Her director in The Seven Year Itch and Some Like It Hot, Billy Wilder, recognized this quality and called her “an absolute genius as a comic actress.” Monroe never lost her desire for life or her sense of humor despite her tribulations, and she treated with humor and insight the depersonalization that came with her status and that often tormented her life and career: “I thought symbols were something you clash.”

The writings on Marilyn Monroe are legion, from press clippings and interviews to formal and not so formal biographies, and only a few of the book-length treatments are listed here. For Monroe’s own reflections on her life, see her My Story (1974), and W. J. Weatherby, Conversations with Marilyn (1976). The most recent and well-balanced portrait is Donald Spoto, Marilyn Monroe: The Biography (1993), which challenges the sensational accounts of the Kennedys and Monroe and also includes a complete filmography. Representative of the more sensational (but still well-received) accounts of Monroe’s life is Anthony Summers, Goddess: The Secret Lives of Marilyn Monroe (1985; 1986). A thoughtful analysis of Monroe’s life, films, and changing cultural meaning can be found in Graham McCann, Marilyn Monroe (1987). Norman Mailer, Marilyn (1973), and Gloria Steinem, Marilyn (1986), perhaps illuminate as much about their authors as they do about Monroe. Many people who knew Monroe have written accounts of her, including Norman Rosten, Marilyn: An Untold Story (1973); Eunice Murray, Marilyn: The Last Months (1975); and James Dougherty, The Secret Happiness of Marilyn Monroe (1976). Newspaper coverage of Monroe’s death was extensive; see especially the Los Angeles Times and the Los Angeles Herald-Examiner, 6–20 Aug. 1962.