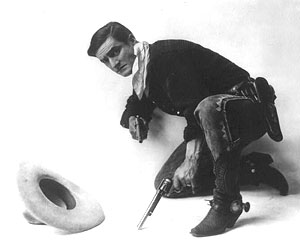 Mix, Tom (06 January 1880–12 October 1940), cowboy and motion picture star, was born Thomas Hezikiah Mix in Mix Run, Pennsylvania, the son of Edwin Elias Mix, a teamster in the lumber industry, and Elizabeth Smith. When Tom was eight, his father moved the family to DuBois, Pennsylvania, where the elder Mix took a job as stableman and chauffeur for the wealthy John E. DuBois family. It was in DuBois that Tom, who quit school after the fourth grade, developed an interest in his father’s work, especially the handling of horses. The locals would frequently comment that “Tom learned to ride anything that could walk.” This early experience laid the foundations for the trick riding and roping that was to become an integral part of Mix’s identity as a western film star.

On 26 April 1898, one day after war was declared against Spain, eighteen-year-old Mix enlisted in the army. He was assigned to Battery M, Fourth Regiment, of the U.S. Artillery, in Delaware. Although he never saw combat, Mix received several promotions and was honorably discharged at the rank of first sergeant on 25 April 1901. Almost immediately, Mix reenlisted and was assigned to Fort Hancock, New Jersey. There, in 1902, Mix married Grace I. Allin, a schoolteacher he had met while visiting friends in Norfolk, Virginia. Their marriage was annulled the following year; they had no children. Grace is frequently cited as the reason Mix failed to return from a furlough in October 1902. He was listed as absent without leave and later as a deserter. Unsure of his status with the army, Mix left the East Coast to pursue his longtime fascination with the West. In 1902 he and his wife moved to Guthrie, Oklahoma, where for the next three years Mix held a variety of jobs, including drum major of the Oklahoma Calvary Band, bartender, law enforcement officer, and ranch hand. In later years movie studios would exploit Mix’s experiences in Oklahoma for the purpose of establishing him as a “real” western cowboy.

In 1905 Mix accepted a full-time job with the famous Miller Brothers 101 Real Wild West Ranch near Bliss, Oklahoma. The 101 was both a working ranch and an entertainment center. There was a Wild West show performed on the grounds, and the movie industry frequently used the ranch for location shooting. Mix’s outgoing personality landed him the responsibility of greeting and coordinating the activities of the ranch’s eastern visitors. However, his riding and roping skills would eventually catch the eye of those from the film industry. Mix seemed completely content with his life at the 101, but Kitty Perrine, his wife, whom he had married in 1905, was not. She divorced him in 1906; they had no children. In 1909 Olive Stokes, whom Mix had met at the 1904 World’s Fair, became his third wife. They would have a daughter.

Mix became involved in the film industry in 1909 after W. A. Dickie, an employee of the Chicago-based Selig Polyscope company, visited the 101 Ranch. Dickie initially hired Mix to locate stock and wranglers for Selig’s western films. However, before completing his first full month at Selig, Mix had already been given a small part in the film The Range Riders (1909), and he later starred in the semidocumentary Ranch Life in the Great Southwest (1910). In the film Mix is shown bulldogging steers and performing other ranch-related activities. This tough cowboy image, combined with Selig’s promotion of him as a U.S. marshal (not exactly accurate), firmly established Mix’s identity as a natural for western films. William Selig was so impressed with Mix’s on-screen performance that he advanced him $250 to put together his own film unit. The unit’s first assignment was in Florida, where Mix was given supporting roles in a series of jungle pictures with Selig’s top female star, Kathlyn Williams, including Back to the Primitive (1911) and Hearts of the Jungle (1915).

In 1913 Mix moved to Prescott, Arizona, to work at Selig’s Diamond S Ranch. Selig wanted to give Mix his own series, but before making the final decision Selig decided to test him in two special productions. First, Mix appeared in a three-reel version of Peter Kyne’s Chip of the Flying U (1914). This was followed by a five-reel feature, In the Days of the Thundering Herd (1914). Selig considered both of Mix’s performances successes and soon offered him his own series.

The first film in the Tom Mix series was the single-reeler The Real Thing in Cowboys (1914). With little interference from Selig, Mix went about assembling his own production unit consisting of Hoot Gibson, Leo Maloney, and close friend Sid Jordan, among others. By 1915 Mix and his unit were rapidly turning out two-reelers for Selig. However, a dispute over production costs between Mix and the company eventually led Mix to sign with William S. Fox in 1917. He also made changes in his personal life that year by divorcing his third wife. Five years later he married his Fox costar Victoria Forde, with whom he had a daughter in 1922.

While working for the Fox company, Mix perfected his brand of western film. He combined good looks, fancy boots, and a ten-gallon hat with his skills as a trick rider and roper to produce action-packed stories. It was a formula that proved extremely popular with young and old alike. Throughout the 1920s Mix and his horse, Tony, would play to packed theaters around the country.

When the talkies came in the late 1920s, Mix, like many other stars of the silent era, found himself facing an uncertain future. Rather than make any immediate decisions, Mix dropped out of motion pictures for approximately two years. During this period, he toured with the Sells-Floto Circus as its main attraction, performing roping and horseback-riding stunts. After divorcing his fourth wife in 1930, Mix married Mabel Hubbell War, an aerial performer with the circus, in 1932; they had a daughter. He also returned to the big screen that year in such features as the original Destry Rides Again, Rider of Death Valley, and My Pal, the King. These films proved moderately successful for Mix, but he would never again attain the stature he had as a silent-film star. After 370 productions and a career that spanned twenty-four years, Mix retired in 1932. He returned three years later to make his last feature, The Miracle Rider (1935). Following his retirement from the film industry, he formed his own touring circus and Wild West show and took part in several international rodeos.

Mix died from injuries suffered in a one-car accident near the city of Florence, Arizona, and was buried in Forest Lawn Memorial Park in Los Angeles. His close friend Gene Autry commented, “Tom Mix contributed a great deal to the betterment of the American cowboy and cowboy sports” (New York Times, 13 Oct. 1940). In fact, Mix was one of the few western “cowboys” whose career encompassed motion pictures, Wild West shows, rodeos, and circuses.