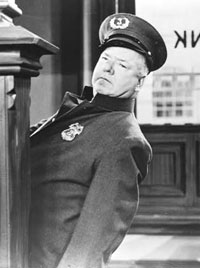 Fields, W. C. (29 January 1880–25 December 1946), comedian in vaudeville, film, and radio, was born William Claude Dukenfield in Philadelphia, Pennsylvania, the eldest son of James Dukenfield, an Englishman, and Kate Felton of Philadelphia. (A number of different dates have been reported for Fields’s birth; the one given here is the most widely accepted.) His background was working-class poor. Fields’s earliest recollections revolved around a sense of deprivation that despite his later affluence and popularity constantly gnawed at him. He always suffered from the knowledge of poverty and once wrote: “I was the oldest child. We were all very poor, but I was poor first.” In his early years, especially after separating from his family, Fields often engaged in petty thievery and scams, which occasionally landed him in jail. His fear of being penniless, an anxiety heightened by the stock market crash of 1929, led him to deposit his earnings under various pseudonymous accounts in different banks around the country, some of which have never been located. In contractual negotiations with small-town theater managers as well as with Broadway impresarios, Fields was known as an especially hard bargainer, even after becoming one of the highest paid performers in the business.

A difficult relationship with his father forced Fields to separate from his parents early in his teens. He dropped out of school and took off across the country working at menial jobs while pursuing a career as a juggler. A feeling of educational deprivation, however, led him to read avidly, including the works of Charles Dickens, whose portrayal of the working classes he identified with, and the writings of William Thackeray and Robert Louis Stevenson.

At the age of nine Fields saw the well-known juggling act of the Bryne Brothers and was immediately hooked on becoming a juggler. On his father’s fruit cart, in hotel rooms, in vacant lots, Fields practiced the art of juggling with a tenacity that eventually catapulted him into the ranks of the best in Europe and America. Starting with fruit, he practiced with plates, hats, rulers, billiards, and knives. His masterpiece was the ability to juggle twenty-five cigar boxes end on end with a little rubber ball on top. To achieve suspense, he allowed the boxes to fall one at a time without disturbing the ones underneath. His juggling of different pieces and playing with the suspense of possible failure created a comic effect. In his act, so he wrote later, he devised little incidents for the audience that seemed like episodes out of real life.

From the 1890s to the 1910s Fields toured Europe and American vaudeville houses, thereby building a reputation for himself in small towns and cities. In 1900 he married Harriet Hughes, a chorus girl who appeared on stage in one of his acts. She proceeded to assist him in his juggling act until a son, Fields’s namesake, was born in 1904. Although the marriage was never formally dissolved, it broke down under the strain of religious differences and the entertainer’s life on the road. The father, however, financially supported his only child.

Fields’s success on the road led to the famous Ziegfeld Follies of Broadway in 1915. He stayed with Ziegfeld for many years developing a comedic style that combined juggling, pantomime, and acting routines. Fields possessed a natural storytelling talent that together with an inflected, exaggerated nasal drawl and rotund face and body resulted in an idiosyncratic comic expression. By this time his comedic approach was artful enough to project everyman’s foibles. The Follies was followed by a major performance in a successful Broadway musical Poppy (1923–1924), a role that he repeated in his first silent film, produced in the Long Island film studios, Sally of the Sawdust (1925), directed by D. W. Griffith. Here he portrayed Professor Eustice McGargle, a smalltime con artist in the 1870s who attempts to use his daughter in a swindle, a type of plot that Fields would perfect over the years.

Appearing in many silent films during the 1920s, Fields extended his repertoire to include the antihero antics of the comic strips, which were especially popular at the time. Fields even took to drawing comic caricatures of himself, calling them “pathetic figures.” Indeed, his physique resembled that of a cartoon figure: rounded head, bulbous nose, rotund torso, all atop spindly legs. In his roles he became the assaulted worker and husband beset by financial problems, harried by children, criticized by wives and relatives.

At the age of fifty-one Fields made his way to Hollywood where he starred in and wrote scripts for a considerable number of films. Two of his most important were It’s a Gift (1934) and The Bank Dick (1940). In David Copperfield (1935) he played the character of Micawber, a scam man, one of Fields’s favorite literary types; his affinity for Dickens derived from his own hardships as a child and Dickens’s portrayal of orphans and outcast children.

Fields’s reputation further widened with his radio debut, in 1937, on The Chase & Sanborn Hour, starring ventriloquist Edgar Bergen and his dummy, Charlie McCarthy. A bantering feud—a skit form originally developed on the radio by comedians Jack Benny and Fred Allen—between Charlie McCarthy and Fields became a staple on the airwaves in the late 1930s and 1940s. By bringing into pseudoconflict a comic strip character in aristocratic dress with an irascible, lovable outsider, the radio program exemplified twentieth-century American insult comedy.

Fields’s humor was a composite of several American strains. He was the lovable misanthrope, a man who combined aggression with charm. He possessed a particular antipathy toward children but managed to make it comically appealing. A memorable and often cited scene involved the child actor Baby LeRoy with whom Fields worked in several films. Fields felt that he was being upstaged by the child’s performances. One day on the set for The Old Fashioned Way (1934), Fields quietly removed the nipple from the Baby LeRoy’s bottle of orange juice and inserted “a couple of noggins of gin.” In the film’s boardinghouse scene, after the child drops Fields’s watch into molasses, spills his soup, and hits him in the face with a spoonful of cream, Fields spots the child alone playing on all fours—and quietly tiptoeing in, gleefully swift-kicks him.

Fields was also a consummate storyteller, a braggadocio whose tall tales fit the pattern of nineteenth-century American hyperbole in the appealing liar and the con man. Even his celebrated drinking habits—Fields drank martinis in public and allowed constant reference to it in radio and film dialog—were exaggerated. He was, moreover, an inventive comic and comedy writer. Films that best revealed his talents include You Can’t Cheat an Honest Man (1939), Never Give a Sucker an Even Break (1941), The Bank Dick (1940), and My Little Chickadee (1940), the last with Mae West. They shared in writing and improvising the original screenplay. In addition to screen and stage plays, Fields also kept up a lively correspondence and even spoofed presidential politics in a campaign book, Fields for President (1940). He offered “no empty panaceas as a New Deal, or an Old Deal, or even a Re-Deal. No, my friends, the reliable old Falso Shuffle was good enough for my father and it’s good enough for me.”

Fields portrayed the American antihero but with aggressive bluff and nonchalance. Because of his special comedic persona, his slow, nasal drawl in particular, Fields became one of the most mimicked and impersonated of performers in twentieth-century American comedy. He died in Pasadena, California.

Portions of papers and sketches by Fields are located in the Manuscript Division of the Library of Congress. Many of these sketches, drawings, and letters are in W. C. Fields by Himself: His Intended Autobiography, ed. Ronald J. Fields (1973). The best overview, combining biographical, critical, bibliographical, and cinematic information, is Wes D. Gehring, W. C. Fields: A Bio-Bibliography (1984). The standard biography, spritely written, is Robert Lewis Taylor, W. C. Fields: His Follies and Fortunes (1949). For his film career, see Donald Deschner, The Films of W. C. Fields (1966).