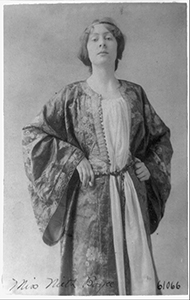 The Cigarette, Neith Boyce, between ca. 1890 and 1930, by Frances Benjamin Johnston

Boyce, Neith (21 Mar. 1872–2 Dec. 1951), novelist and playwright, was born in Franklin, Indiana as the second but first legitimate child together of Civil War veteran Henry Harrison Boyce and Mary Ella Smith—both teachers. Scandal about her parents’ relationship soon forced them to leave teaching and enter a peregrinating life. Family life was tragically affected by the 1880 diphtheria epidemic that killed all four of Neith’s siblings within a week.

Neith Boyce was largely self-educated. After her family moved to Los Angeles and during her teenage years, she entered the city’s bohemian community and began publishing stories in little magazines. An economic downturn limited her higher education to a year at Los Angeles College from 1886 to 1887. That downturn, plus a smear campaign against her father, pushed the family to Boston, where Neith’s first book of poetry, Songs, appeared in 1892. By 1894 the Boyces had moved to Manhattan and then Mount Vernon, New York, for opportunities in real estate and editing. During this period Boyce worked at the magazine of the General Federation of Women’s Clubs and began publishing in a new cultural magazine, Vogue. Her unsigned 1895 “Editorial” review of George Moore’s fictional trilogy, Celibates, garnered attention as a feminist manifesto.

At a dinner organized by Vogue’s editor, Josephine Redding, Boyce met Norman Hapgood, later editor of Collier’s Weekly and Harper’s Monthly and her eventual brother-in-law. On his recommendation, she was hired in fall 1896 as the first female reporter on the Commercial Advertiser, where she met Norman’s younger brother, Hutchins. The couple married on 22 June 1899 in Mount Vernon, New York. They attempted a New Marriage based on complete equality and sexualized intimacy without a commitment to monogamy as the basis for the union. The rest of her life and much of her writing would be taken up with working out the fine print in that marriage contract.

Over the next ten years Neith Boyce produced four books and four children while surviving a marital and nervous crisis. Initial qualms about motherhood dissolved after the birth in 1901 of son Boyce Hapgood. In spring 1903 young Boyce accompanied his parents on Neith’s first trip to Italy, where she completed her first novel, The Forerunner, and befriended art connoisseurs Mary and Bernard Berenson. Neith drew upon their villa, its butler, and the world-famous beauty Gladys Deacon for her 1906 psychological novel, The Eternal Spring. She also worked on “A Provident Woman,” a novella that appeared in her 1904 collection of long stories. News of her father’s accidental death brought the Hapgoods back to New York, where a second son, Charles Hutchins Hapgood II, was born.

Next came Chicago and then Italy again, where Neith’s daughter Miriam was born in November 1906. A marital crisis inspired Boyce’s nervous breakdown and institutionalization in Indianapolis in 1908. Pertinently, Neith’s novel The Bond, dissecting a marriage, appeared that same year. Its heroine, devoted to full honesty and personal autonomy for both parties, is reduced to confessing to an affair while the husband avoids full disclosure of his. None of the reviewers understood her criticism of the double standard of sexual behavior.

In 1909 the Hapgoods moved to New Jersey, where Hutch began working at the New York Post as an editorial writer and a second daughter, Beatrix, was born in 1910. In 1911 Hapgood’s wealthy father bought them, sight unseen, a large home overlooking the Hudson River in Dobbs Ferry, New York. By now an established author publishing stories about women’s complicated lives regularly in major middle- to upper-brow magazines such as Lippincott’s Monthly Magazine, Collier’s, Harper’s Weekly, and American Magazine, Boyce resented the isolation of suburban life.

In summer 1911 the family was drawn to Provincetown on Cape Cod by labor journalist Mary Heaton Vorse. From the beginning, Neith loved Provincetown. The next year brought friendship with writer Mabel Dodge, with whom, in midsummer 1914, Neith and two of her children set sail for Italy. When war broke out Neith managed to get herself and the children home in the company of writer and photographer Carl Van Vechten.

In 1915 Neith, Hutch, and the children spent their fifth summer in Provincetown, where the war pulled many artists and writers who otherwise would have been in Europe. Since Broadway wasn’t interested, Neith prompted the “Regulars” of Provincetown (soon to be known as the Provincetown Players) to put on their own plays. She wrote, directed, and took the lead in her one-act Constancy, on the evening of 15 July 1915 at home. Robert Edmond Jones, later a famous New York set designer, had transformed their rental’s verandah into Mabel Dodge’s Villa Curonia in Florence, where Neith had stayed in 1914. Most audience members viewed it as a satire of Dodge’s recent romance with John Reed, but scholars now read it as a portrait of the Boyce-Hapgood marriage as well.

During its short but brilliant life, the Provincetown Players became one of the twentieth century’s most influential theater groups. The summer 1916 season opened on the wharf with Boyce’s one-act play Winter’s Night. Now considered a classic of American drama, it depicts a farm wife relishing the prospect of a different kind of life in town after the death of her husband. Her brother-in-law, however, reveals that he stayed on the farm in order to be near her and proposes marriage. When she refuses, he shoots himself offstage. The season closed with performances of Enemies, a one-act play that Boyce and Hapgood claimed to have written together (although scholars now say Neith did most of the work). Neith’s The Two Sons was performed in the group’s first New York City season, 1916–1917.

Just as Boyce was finally making it as a playwright, in the summer of 1917 she took the children and dog to live on a farm outside Norwich, Vermont for a year. In August 1918 her son Boyce (“Harry”) and Mabel’s son John Evans set off to work as cowboys in the West. To Neith’s everlasting sorrow, Harry died at age seventeen in New Mexico of the Spanish Influenza. The tragedy brought Neith and Hutch together, never to separate seriously again. It also ended Neith’s involvement with the Provincetown Players, which folded in 1922.

In 1925 Boyce and Hapgood bought a farm near Richmond, New Hampshire and began annual progressing: farm–Provincetown–New York, then Key West for the winter. The Great Depression brought other artists and intellectuals to rural New Hampshire for like-minded company. From 1930 to 1935 Boyce labored by invitation on a stage version of H.G. Wells’ story-turned-book, The Sea Lady, but at the last minute, Wells’ U.S. manager pulled the rights. When her husband’s health began to fail, she had him dictate an autobiography to her, published in 1939 as A Victorian in the Modern World. He died in 1944.

Always interested in history, during the last ten years of her life Boyce produced a work of historical nonfiction, Story of an American Family: Letters and Commentary on the Hapgood Family, 1648–1917, which was privately printed by her son. By the time a copy was put into her hands in late 1951, she was bedridden and unable to speak. She died in Provincetown.

A feminist-anarchist, Boyce is recognized as the Ur-Mother of the Provincetown Players and an important forecaster of strains on the institution of marriage as it changed during the twentieth century. Her life exemplifies how modernism was more than an artistic aesthetic; it was a new way of conceptualizing human relationships.

Neith Boyce’s papers are part of the Hapgood Family Papers at Yale’s Beinecke Rare Book and Manuscript Library, New Haven, Connecticut. Ellen Kay Trimberger’s 1991 edited volume, Intimate Warriors: Portraits of a Modern Marriage, 1899–1944 presents selections from Boyce’s and Hapgood’s letters, publications, and her 1915 play, Constancy. Reprints are available of her novels: The Forerunner (1903); a collection of novellas, The Folly of Others (1904 and 1974); The Eternal Spring (1906); The Bond (1908); Proud Lady (1923); and the memoir of her first-born son who died in the Spanish Influenza pandemic, Harry: A Portrait (1923)Find it in your libraryGoogle PreviewWorldCat. Her 1939–1940 autobiography and two travel diaries are collected in The Modern World of Neith Boyce (2003). Her daughter Beatrix Hapgood Faust edited Boyce’s The Town in the Forest: Life Story of Richmond, New Hampshire, for publication in 1992. Boyce’s search for personal autonomy is explored in Kate Bolick, Spinster: Making a Life of One’s Own (2015)Find it in your libraryGoogle PreviewWorldCat. See also Christine Stansell, American Moderns: Bohemian New York and the Creation of a New Century (2000)Find it in your libraryGoogle PreviewWorldCat, and Claire Virginia Eby, Until Choice Do Us Part: Marriage Reform in the Progressive Era (2014)Find it in your libraryGoogle PreviewWorldCat. Obituaries in the Cape Cod Times and The New York Times on 3 Dec. 1951 misstate Boyce’s birthplace as Los Angeles.