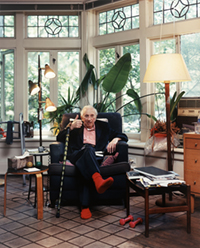 Terkel, Studs (16 May 1912–31 Oct. 2008), oral historian, radio broadcaster, and political activist, was born Louis Terkel in the Bronx, New York. He was the third son of Samuel Terkel, a tailor, and Anna (Annie) Finkel, a seamstress, who had immigrated from Russia in 1903. His family moved to Chicago in 1921 to run a rooming house. In 1926, they leased the Wells-Grand Hotel, a fifty-room residential hotel for transient workers. Terkel claimed to have gotten his best education from the hotel’s tenants, listening to their stories and debates in the lobby, and from the soapbox orators in a nearby park known as Bughouse Square. He identified closely with his adopted city and in 1939, while acting in the Chicago Repertory Group with two other actors named Louis, began calling himself “Studs,” after the swaggering Chicago tough Studs Lonigan of James T. Farrell’s novels.

Terkel attended McKinley high school and spent two years at Crane Junior College before graduating from the University of Chicago in 1932 and from the university’s law school in 1934. An admittedly indifferent law student, he passed the bar exam on his second try. He took the Civil Service exam and applied for a job as an FBI fingerprint classifier, but was turned down after being asked if he was “of Hebrew extraction” (Talking to Myself, p. 126). Instead, the Federal Emergency Relief Administration hired him for a study of unemployment around the country. During a stint with FERA in New York he frequented the theater and became enthralled with acting. Taking a tedious job counting bonds for the Treasury Department, he diverted his attention to the Washington Civic Theater Group and earned good reviews for playing the villain in the anti-fascist play It Can’t Happen Here.

Returning to Chicago in 1938, Terkel joined the Federal Writers’ Project’s Radio Division, writing radio scripts. His gravelly voice won him parts as a thug on several Chicago-based radio soap operas, where his characters invariably got killed or sent to prison. A director once waved off his request to play a good guy by observing that heroes had pear-shaped tones, but his were “apricot-shaped” (Touch and Go, p. 94). While acting in the Chicago Repertory Group in 1939, Terkel met and married Ida Goldberg, a social worker from Wisconsin who shared his progressive views. They had one son.

Drafted into the Army Air Forces in 1942, Terkel wrote speeches and scripts for the special services until he received a medical discharge a year later because of perforated eardrums. He then reported news and sports on Chicago radio stations and in 1945 started a music program, The Wax Museum. As a disc jockey playing jazz, blues, and folk music he occasionally interviewed the performers on the air. Those interactions inspired his first book, Giants of Jazz (1957), written for young people.

Politically, Terkel signed petitions and spoke out for numerous leftist causes, from labor grievances to civil rights, and emceed rallies for Henry Wallace’s Progressive Party. “God knows how many speeches I made,” he reflected, noting that because the federal government later branded some of these groups as subversive, the FBI periodically investigated him (Talking to Myself, p. 124). His political past haunted him when he starred in an early Chicago-based television program, Studs’ Place, which ran from 1949 to 1952. Set in a diner, it featured stories about regular folks. The actors improvised their dialogue rather than rely on scripts. The program’s spontaneous nature appealed to critics but it was canceled due to low ratings and a campaign by anticommunist groups to blacklist Terkel. When network executives urged him to disavow the causes he had supported, he refused to retract anything.

Banishment from television hurt Terkel financially but worked to his advantage as an interviewer. He returned to radio by persuading the fledgling Chicago fine arts station WFMT to let him host a music and talk show. The Studs Terkel Program ran from 1952 until 1998, first weekly and then five days a week. Its open structure allowed Terkel to develop an interviewing style that would not have been possible on more tightly formatted television. Like his eclectic taste in music, his choice of interviewees ranged widely, from singers and musicians to authors, actors, and activists.

Terkel’s radio interviews drew the attention of André Schiffrin, managing editor of Pantheon Books, who suggested that he do an oral history of a Chicago neighborhood, modeled after Jan Myrdal’s Report from a Chinese Village (1965). The result was Division Street: America (1967), whose interviews with ordinary people, both black and white, won praise from reviewers and became a best-seller. Schiffrin next proposed that Terkel ask people to recall how the Depression had affected them, which inspired another best-seller, Hard Times: An Oral History of the Great Depression (1970). For Hard Times, Terkel moved beyond Chicago to widen the range of locations and social status of his interviewees.

Periodically, Terkel took leave from his radio show to crisscross the country, interviewing for his books. Then he would sift through the transcripts—describing himself as a miner seeking the gold—and reduce each to a few pages, trying not to distort anyone’s thoughts. Often he removed the questions that elicited such compelling responses, which left the impression that he was simply holding a mirror to society. The critic Edward Rothstein charged that Terkel infused his own perspective into his oral histories. Indeed, Terkel was as much a part of the discussion as those he interviewed, but he talked to everyone, whether he agreed with them or not, and refrained from editorial comment, limiting his own thoughts to the book’s introduction. His genuine empathy and respect for his diverse interviewees encouraged them to speak candidly. His ineptness in operating tape recorders and other equipment also put them at ease.

He followed with Working: People Talk About What They Do All Day and How They Feel About What They Do (1974), an evocative book about workplace alienation. Lyricist Stephen Schwartz turned it into a Broadway musical, Working (1977). Dramatist Arthur Miller tapped the interviews in Hard Times for a stage play, The American Clock (1980). Terkel’s output reached its peak of acclaim when he won a Peabody Award for his broadcasts in 1980, and a Pulitzer Prize for “The Good War”: An Oral History of World War II (1984).

While continuing to write and broadcast, he occasionally acted. His appearance as a taxi driver in a television movie, The Dollmaker (1984), required a stunt double since he had never learned to drive. He played a newspaper reporter in Eight Men Out (1988), a film about the 1919 Chicago White Sox scandal. In Ken Burns’s documentary The Civil War (1990), Terkel provided the voice for General Benjamin F. Butler.

Short, compact, gregarious, and dressed habitually in a red-checked shirt, blue blazer, gray slacks, and red socks, Terkel became a national icon. In a New Yorker cartoon a man tells a woman, about to answer the phone: “If that’s Studs Terkel, there are seven or eight things I’d like to get off my chest” (New Yorker, 29 Nov. 1982, p. 166). Even as his fame grew, however, Terkel felt uncomfortably detached from the national mood of the conservative 1980s. His oral history of that decade, The Great Divide: Second Thoughts on the American Dream (1988), recorded a deepening chasm between the haves and have-nots, and further divisions by race and religion. He despaired that Americans had cut themselves off from past values and were suffering from collective amnesia.

Terkel felt further aggrieved in 1990, when new management forced the resignation of his longtime editor. He followed André Schiffrin to The New Press, which published his further oral histories: Race: What Blacks and Whites Think and Feel About the American Obsession (1992); Coming of Age: The Story of Our Century by Those Who’ve Lived It (1995); The Spectator: Talk about Movies and Plays with Those Who Make Them (1999); Will the Circle Be Unbroken? Reflections on Death, Rebirth and Hunger for a Faith (2001); and Hope Dies Last: Keeping the Faith in Difficult Times (2003).

Conceding that he loved to talk as much as to listen, Terkel published several self-reflections: Talking to Myself: A Memoir of My Times (1977); And They All Sang: Adventures of an Eclectic Disc Jockey (2005); Touch and Go: A Memoir (with Sydney Lewis, 2007); and P.S.: Further Thoughts from a Lifetime of Listening (2008). Shortly before his death he gave an interview for a television documentary about his life: Studs Terkel: Listening to America (2009).

Numerous honorary degrees and awards came his way, among them the National Humanities Medal and National Medal of Arts presented at the White House in 1997. Chicago named the Division Street Bridge for him. Throughout the acclamation, Terkel retained his progressivism. Invoking the blacklist, he joined the plaintiffs in a case to stop telecommunications companies from turning customer records over to the National Security Agency. Although frail after a fall in 2004 and open-heart surgery the next year, he stayed professionally active until his death at his Chicago home at the age of ninety-six.

Studs Terkel won acclaim for celebrating the uncelebrated. His books reminded present generations what it had been like for ordinary people to live in the past, and popularized oral history. His traditional radio sign-off, “Take it easy, but take it,” succinctly captured his philosophy of life.

Terkel donated his correspondence and recordings to the Chicago Historical Society. The Library of Congress and the Chicago History Museum collaborated to digitize and catalog the recordings for posting on The Studs Terkel Radio Archives website, http://studsterkel.wfmt.com/. Audio recordings are also available in Voices of Our Times: Five Decades of Studs Terkel Interviews (1999). James Thomas Baker, Studs Terkel (1992) analyzes Terkel’s books; Tony Parker, Studs Terkel: A Life in Words (1996) combines interviews with and about him; and Alan Wieder, Studs Terkel: Politics, Culture, but Mostly Conversation (2016) assesses his life. Other useful sources are Michael Frisch, “Oral History and Hard Times: A Review Essay,” Oral History Review 7 (1979): 70–79; and Ronald J. Grele, Envelopes of Sound: The Art of Oral History (1975; rev. 2d. ed., 1990). Obituaries appeared in the Chicago Tribune and The New York Times, 1 Nov. 2008.