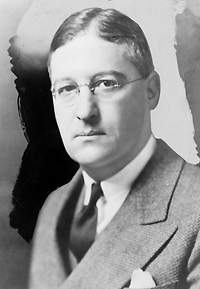 Courtesy of the Library of Congress (New York World-Telegram and the Sun Newspaper Photograph Collection: LC-USZ62-133899).

Krock, Arthur (16 November 1886–12 April 1974), a Pulitzer Prize-winning columnist and formidable newspaper manager, a Pulitzer Prize–winning columnist and formidable newspaper manager, was born Arthur Bernard Krock in Glasgow, Kentucky, to Joseph Krock, a bookkeeper, and Caroline Morris, a homemaker who became blind at her son's birth. Both parents were of German Jewish descent. For his first six years Krock was raised by his maternal grandparents; when his mother regained her sight he rejoined his parents, then in Chicago, and graduated from high school in 1904. Krock went to Princeton but dropped out during his freshman year because of financial difficulties, returned home, and in 1906 graduated with an associate in arts degree from Chicago's Lewis Institute.

Krock's career as a journalist began in 1907 when he was hired as a general assignment reporter for the Louisville Herald in Kentucky, covering stories statewide. The next year, when the newspaper faced financial difficulties, he allowed himself to be laid off to save the job of a family man. Krock had a stint as a deputy sheriff before becoming a night editor for the Associated Press in Louisville. In 1909 he became the Washington, D.C., correspondent for the Louisville Times as a result of his romantic involvement with the daughter of the newspaper's owner; the daughter died in Paris of complications from a burst appendix before she and Krock could marry.

In 1911 Krock married Martha Pollys, daughter of a railroad official. They had one son. After a long illness she died in 1938; the next year Krock married Martha Granger Blair, a fashionable Chicago divorcée who worked as a society columnist for the Washington Times‐Herald.

Beginning in 1911 Krock also served as Washington correspondent for the Louisville Courier‐Journal. Under his direction its bureau and that of the Louisville Herald were merged. Four years later he returned to Louisville as editorial manager of the jointly owned papers. While holding that position he covered, among other events, the Paris Peace Conference in 1919–1920. Strife among the owners of the papers, Krock recalled later, led him to scout for new ownership, which was found with Robert Bingham, who bought the two papers in 1918. Although Bingham named Krock editor in chief of the Times, he limited Krock's managerial activities. In early 1923 Krock moved to New York City and worked briefly for the movie industry's newly established lobbying body before becoming an assistant to Ralph Pulitzer, the publisher of the New York World, and subsequently also becoming an editorial writer.

Policy disputes with the World's editors and with Pulitzer—who according to the Celebrity Register once characterized Krock as having “a tongue as sharp as emery and a heart as soft as hominy”—led Krock to join the New York Times in 1927 as an editorial writer. Krock became head of the paper's Washington bureau in 1932 and ran it until he stepped down in 1953, although he did not retire until 1966.

Krock ran the Washington bureau with an iron hand. He brooked no interference in what he saw as his fiefdom. According to one historian of the newspaper, Krock's bureau had “more self‐rule than the Times had ever permitted before or ever would again” (Talese, p. 192). Formality was the order of the day; he addressed each member of his staff as “mister” and was always “Mister Krock,” even to newsmen who had known him for years; when queried about this by a reporter Krock told him, “I'm sorry, that's the way I am.” He supported his staff, assumed that they knew their jobs, and held only three staff conferences during his tenure as bureau chief. Recognizing the changes wrought in Washington by the New Deal and World War II, Krock hired individuals for the bureau capable of specializing and writing with more depth.

Krock had a distinquished career as a newsman in Washington. His column “In the Nation”—one of the first of its kind because hitherto newspapers had commented on current political events only in unsigned editorials—ran several times a week as well as Sundays until he retired from the newspaper in 1966. His increasingly conservative outlook clashed with the Times's generally more liberal editorial policy, especially after the re‐election of President Franklin D. Roosevelt in 1936.

Nominally a Democrat, Krock was a conservative southern supporter of state's rights and regarded New Deal politicians and policies critically. As a Washington Post obituary pointed out, he initially supported Roosevelt's diverse efforts to rescue the U.S. from the devastating impacts of the Great Depression, but by 1936 argued against such federal efforts, deploring what he viewed as “a neosocialist welfare state.”

During his tenure at the Times, Krock never hesitated to pass judgment on a president, government official, Congress, or the courts. In his memoirs, reflecting on his 44 years as a columnist, Krock expressed serious concerns about “the vastly expanding powers of the president to commit the American people to … global evangelism” and “the recurring abdication by Congress … of its coordinate constitutional function, the mounting assumption of authority to impose crippling controls of the free enterprise system” (p. 453).

Krock felt uneasy in the face of a liberal and activist Supreme Court. In a column on 14 June 1943 he argued that the court justices “have managed frequently to find law to cover legislation carrying out their own and their group philosophies.” He opposed on constitutional grounds the Supreme Court's 1954 antisegregation decision in Brown v. Board of Education and asserted that the court, even with the support of the president, could not force parents to send their children to racially integrated schools.

Krock's Times columns were frequently pointed in their assertions. He celebrated “the extraordinary public service record of Herbert Hoover” (30 June 1955), condemned “the basic monopoly power of an industry‐wide trade union” (6 Jan. 1960), faulted President Harry S. Truman for “shooting from the hip” (15 Nov. 1953), and criticized President Lyndon B. Johnson's Great Society as “financing deliberate idleness” (5 Feb. 1966). Krock responded to the emergence of McCarthyism by saying that while “many fair‐minded persons … have been hostile to the manner in which Mr. McCarthy has presented his charges … there is evidence that these persons are beginning to lose confidence in their appraisal” (22 April 1950). Krock would later endorse the denial of nuclear scientist J. Robert Oppenheimer's security clearance based on Oppenheimer's leftist political affiliations, arguing that “the nation, having entrusted him … has a right to expect very different conduct” (30 June 1954).

Krock's views on U.S. actions in Vietnam, expressed early in the war, were prescient. An article dated 24 July 1965 argued that the U.S. was “stuck in a tar baby” by virtue of its involvement and questioned whether American involvement was “beyond our reasonable sphere of national security and interest.” In one of his last columns, Krock referred to the “riddles of policy” that resulted from “official evasions and outright misrepresentations” related to the war (18 April 1966).

“Closer, longer to the power centers”

A workhorse, Krock often wrote the paper's lead Washington stories and dominated its government coverage. Over the years Krock became a confidant of powerful people in and out of government. Time magazine argued that Krock was “closer, longer to the power centers of U.S. politics than any other man, journalist or politician.” Typically, Joseph Kennedy asked the columnist to look over the undergraduate thesis of his son John F. Kennedy—the thesis later published as Why England Slept (1940). Krock constantly cultivated new sources and never rested on his laurels.

Over the years Krock had a number of scoops, ranging from the appointment by President Roosevelt of Cordell Hull as his secretary of state in 1933 to President Truman's offer to General Dwight D. Eisenhower of the Democratic Party's presidential nomination in 1948. Krock won three Pulitzer Prizes: in 1935, for the “general excellence” of his coverage of the New Deal; in 1937, for a personal interview with President Roosevelt—the last exclusive interview that the president granted, supposedly asserting, “Never again.” A 1950 interview with President Truman garnered Krock his third Pulitzer Prize, but he turned it down because he served on the prize's advisory board—something he did from 1940 to 1953.

In 1955 he received a special Pulitzer citation for his work as a Washington newsman. Krock received honorary degrees from Princeton University, the University of Kentucky, the University of Louisville, and Centre College in Danville, Kentucky. In 1970 he was awarded the Medal of Freedom, the highest U.S. civilian award. After retirement he published a collection of his columns (In the Nation, 1966), his memoirs (Memoirs: Sixty Years on the Firing Line, 1968)—a best seller—a critical view of government (The Consent of the Governed, and Other Conceits, 1971), and reminiscences of growing up in 1890s Louisville (The Reminiscences of Arthur Krock, 1972). His books like his columns were both nostalgic about the past and concerned about the future. Krock died in Washington, D.C.

Krock's papers are in the Seeley G. Mudd Manuscript Library, Princeton University. Useful for his life are Arthur Krock, Memoirs: Sixty Years on the Firing Line (1968), and Myself When Young: Growing Up in the 1890s (1973). He wrote an introduction to the selection of his columns, In the Nation, 1932–1966 (1966). Obituaries are in the Washington Post, 13 Apr. 1974, and the New York Times, 13 Apr. 1974, which also contains a thoughtful appraisal by the columnist James Reston, who succeeded Krock as Washington bureau chief. See also the history of the New York Times by Gay Talese, The Kingdom and the Power (1969), and the Celebrity Register (1959, 1963, 1973). Krock also edited the writings of the fiery legendary editor of the Louisville Courier‐Journal in The Editorials of Henry Watterson (1923).