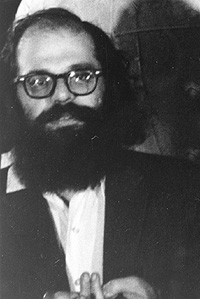 Ginsberg, Allen (03 June 1926–06 April 1997), poet, was born in Newark, New Jersey, the younger son of Louis Ginsberg, a high school English teacher and and Naomi Levy Ginsberg. Ginsberg grew up with his older brother Eugene in a household shadowed by his mother's mental illness; she suffered from recurrent epileptic seizures and paranoia. An active member of the Communist Party–USA, Naomi Ginsberg took her sons to meetings of the radical left dedicated to the cause of international Communism during the Great Depression of the 1930s.

In the winter of 1941, when Allen was a junior in high school, his mother insisted that he take her to a therapist at a Lakewood, New Jersey, rest home, a disruptive bus journey he described in his long autobiographical poem “Kaddish.” Naomi Ginsberg spent most of the next fifteen years in mental hospitals, enduring the effects of electroshock treatments and a lobotomy before her death at Pilgrim State Hospital in 1956. Witnessing his mother's mental illness had a traumatic effect on Ginsberg, who wrote poetry about her unstable condition for the rest of his life.

Graduating from Newark's East Side High School in 1943, Ginsberg later recalled that his most memorable school day was the afternoon his English teacher Frances Durbin read aloud from Walt Whitman's “Song of Myself” in a voice “so enthusiastic and joyous … so confident and lifted with laughter” that he never forgot the image of “her black-dressed bulk seated squat behind an English class desk, her embroidered collar, her voice powerful and high” (quoted in Schumacher, p. 17). Despite his passionate response to Whitman's poetry, Ginsberg listed government or legal work as his choice of future occupation in the high school yearbook.

Attending the college of Columbia University on a scholarship, Ginsberg considered his favorite course the required freshman great books seminar taught by Lionel Trilling. Later Ginsberg also cited the renowned literary critics and biographers Mark Van Doren and Raymond Weaver as influential professors at Columbia. But Ginsberg's friends at Columbia were an even greater influence than his professors on his decision to become a poet. As a freshman he met undergraduate Lucien Carr, who introduced him to William S. Burroughs and Jack Kerouac, part of a diverse (and now legendary) circle of friends that grew to include the Times Square heroin addict Herbert Huncke, the young novelist John Clellon Holmes, and a handsome young drifter and car thief from Denver named Neal Cassady, with whom Ginsberg fell in love. Kerouac described the intense encounter between Ginsberg and Cassady in the opening chapter of his novel On the Road (1957).

These friends became the nucleus of a group that named themselves the “Beat Generation” writers. The term was coined by Kerouac in the fall of 1948 during a conversation with Holmes in New York City. The word “beat” referred loosely to their shared sense of spiritual exhaustion and diffuse feelings of rebellion against what they experienced as the general conformity, hypocrisy, and materialism of the larger society around them caught up in the unprecedented prosperity of postwar America.

In the summer of 1948, in his senior year at Columbia, Ginsberg had dedicated himself to becoming a poet after hearing in a vision the voice of William Blake reciting the poem “Ah Sunflower.” Experimenting with drugs like marijuana and nitrous oxide to induce further visions, or what Ginsberg later described as “an exalted state of mind,” he felt that the poet's duty was to bring a visionary consciousness of reality to his readers. He was dissatisfied with the poetry he was writing at this time, traditional work modeled on English poets like Sir Thomas Wyatt or Andrew Marvell whom he had studied at Columbia.

In June 1949 Ginsberg was arrested as an accessory to crimes carried out by Huncke and his friends, who had stored stolen goods in Ginsberg's apartment. As an alternative to a jail sentence, Ginsberg's professors Van Doren and Trilling arranged with the Columbia dean for a plea of psychological disability, on condition that Ginsberg was admitted to the Columbia Presbyterian Psychiatric Institute. Spending eight months in the mental institution, Ginsberg became close friends with the young writer Carl Solomon, who was treated there for depression with insulin shock.

In December 1953 Ginsberg left New York City on a trip to Mexico to explore Indian ruins in Yucatan and experiment with various drugs. He settled in San Francisco, where he fell in love with a young artist's model, Peter Orlovsky; he took a job in market research, thinking that he might enroll in the graduate English program at the University of California in Berkeley. In August 1955, inspired by the manuscript of a long jazz poem titled “Mexico City Blues” that Kerouac had recently written in Mexico City, Ginsberg found the courage to begin to type what he called his most personal “imaginative sympathies” in the long poem “Howl for Carl Solomon” (Original Draft Facsimile Howl, p. xii). As his biographer Bill Morgan stated, in the poem “Allen finally accepted his homosexuality and stopped trying to become ‘straight'” (Allen Ginsberg and Friends, p. 31).

In October 1955 Ginsberg read the first part of his new poem in public for the first time to tumultuous applause at the Six Gallery reading in San Francisco with the local poets Kenneth Rexroth, Gary Snyder, Michael McClure, Philip Whalen, and Philip LaMantia. Journalists were quick to herald the reading as a landmark event in American poetry, the birth of what they labeled the San Francisco Poetry Renaissance. Lawrence Ferlinghetti, who ran the City Lights Book Store and the City Lights publishing house in North Beach, sent Ginsberg a telegram echoing Ralph Waldo Emerson's response to Walt Whitman's Leaves of Grass: “I greet you at the beginning of a great career. When do I get the manuscript?” Later Ginsberg wrote that “in publishing ‘Howl,' I was curious to leave behind after my generation an emotional time bomb that would continue exploding in U.S. consciousness in case our military-industrial-nationalist complex solidified into a repressive police bureaucracy” (Original Draft Facsimile Howl, p. xii).

Early in the following year Howl and Other Poems was published with an introduction by William Carlos Williams as number four in the City Lights Pocket Poets Series. In May 1956 copies of the small black-and-white stapled paperback were seized by the San Francisco police, who arrested Ferlinghetti and Shigeyoshi Murao, his shop manager, and charged them with publishing and selling an obscene and indecent book. The American Civil Liberties Union took up the defense of Ginsberg's poem in a highly publicized obscenity trial in San Francisco, which concluded in October 1957 when Judge Clayton Horn ruled that Howl had redeeming social value.

During the furor of the trial, Ginsberg left California and settled in Paris with Orlovsky, who was to remain his companion for the next forty years. Living on Ginsberg's royalties from Howl and Orlovsky's disability checks as a Korean War veteran, they traveled to Tangier to stay with Burroughs and help him assemble the manuscript later published as his novel Naked Lunch (1959). In 1958 Ginsberg returned to New York City, still troubled by his mother's death in the mental hospital two years before, haunted by the thought that he had never properly said goodbye to her. Using various drugs to explore his painful memories of their life together and confront his complex feelings about his mother, Ginsberg wrote his greatest poem, “Kaddish for Naomi Ginsberg,” modeling his elegy on the traditional Jewish memorial service for the dead.

Continuing to experiment with various psychedelic stimulants to create visionary poetry, Ginsberg traveled to South America, Europe, Morocco, and India with Orlovsky in 1962. It was the most important trip of his life. Staying in India for nearly two years, he met with holy men in an effort to find someone who could teach him a method of meditation that would help him deal with his egotism and serve as a vehicle for heightened spiritual awareness. On a train in Japan, Ginsberg recorded in his poem “The Change” his realization that meditation, not drugs, could assist his enlightenment. He returned to North America in the fall of 1963 to attend the Vancouver Poetry Conference with Charles Olson, Robert Duncan, Robert Creeley, Denise Levertov, and many other poets who felt that they formed a community of nonacademic experimental writers.

In 1968 Ginsberg received wide coverage on television during the Democratic National Convention when he and the members of the National Mobilization Committee who were against U.S. participation in the war in Vietnam confronted the police in Chicago's Grant Park. The poet stayed on an impromptu stage and chanted “Om” in an attempt to calm the crowds being brutally attacked by tear gas and billy clubs. Ginsberg's courage, his humanitarian political views and support of homosexuality, his engagement in Eastern meditation practices, and his charismatic personality made him one of the favorite spokesmen chosen by a younger generation of radicalized Americans known as “hippies” during the end of this turbulent decade.

In the early 1970s Ginsberg's serious, bearded image with black-rimmed glasses, a tweed jacket, and an “Uncle Sam” paper top hat became a ubiquitous poster protesting the Vietnam War. In 1971 Ginsberg met Chögyam Trungpa Rinpoche, who became his meditation teacher at the Naropa Institute, a Buddhist college in Boulder, Colorado. Three years later, Ginsberg, assisted by the young poet Anne Waldman, founded a creative writing program called the Jack Kerouac School of Disembodied Poetics at Naropa. Ginsberg taught summer poetry workshops there and lectured during the academic year at Brooklyn College as a tenured distinguished professor until the end of his life.

In his remaining years, publishing steadily and traveling tirelessly despite increasing health problems with diabetes and the aftereffects of a stroke, Ginsberg gave readings in Russia, China, Europe, and the South Pacific. In the bardic tradition of William Blake, Ginsberg often accompanied himself on a portable harmonium bought in Benares for fifty dollars. He was the archetypal Beat Generation writer to countless poetry audiences and to the general public. Unlike Kerouac, who died in 1969, Ginsberg remained a radical poet, the embodiment of the ideals of personal freedom, nonconformity, and the search for enlightenment. As a member of the American Academy and Institute of Arts and Letters, he unabashedly used his prestige to champion the work of his friends. Two months short of his seventy-first birthday, he died of liver cancer at his home in the East Village, New York City.