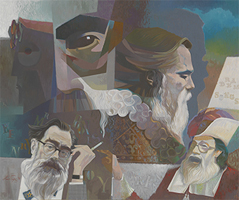 Berryman, John (25 October 1914–07 January 1972), poet, was born John Allyn Smith, Jr., in McAlester, Oklahoma, the son of John Allyn Smith, a banker, and Martha Little, formerly a schoolteacher. The family moved frequently, finally settling in Tampa, Florida, where his father speculated in land, failed, and in 1926 committed suicide. Three months later his mother married John McAlpin Berryman, whose name was given to the son.

In 1939 Berryman taught at Wayne University (later Wayne State University) in Detroit and served as poetry editor of The Nation. By December he was hospitalized for epilepsy, although he was actually suffering from nervous exhaustion, a condition that would recur in future years, exacerbated by alcoholism. His first collected poems appeared in Five Young American Poets (1940), while Berryman taught at Harvard. Classified 4-F for the wartime draft, Berryman married Eileen Mulligan in 1942. The next year he published Poems. Unemployed and desperate enough to briefly teach English and Latin at a prep school, Berryman landed an instructorship at Princeton, having been invited by poet R. P. Blackmur; this became home for a decade.

For the next twenty years Berryman established his academic credentials, beginning with reviews of W. W. Greg’s The Editorial Problem in Shakespeare, a critical edition of King Lear (never published), and articles on Henry James, F. Scott Fitzgerald, and Robert Lowell. He was promoted to associate in creative writing (1946) and resident fellow (1948) at Princeton, and his work The Dispossessed (1948) won the Poetry Society of America’s Shelley Memorial award. He associated professionally and socially with Lowell, Saul Bellow, and others. He was also meeting women, and in 1946 he began his lifelong series of infidelities, recorded in Sonnets to Chris (written 1947, published 1967; also titled Berryman’s Sonnets). His intense diary entries provide insight into his mania for sexual attention and adulation.

Berryman’s poetic and academic lives continued apace. He published “The Poetry of Ezra Pound,” defended Pound’s Bollingen Prize in a letter (signed by seventy-three writers) to The Nation (1949), and published his psychological biography, Stephen Crane (1950), which reveals Berryman as well as Stephen Crane himself (see John Clendenning in Recovering Berryman, ed. Richard Kelley [1993]). He also wrote on Marlowe, Shakespeare, Monk Lewis, Walt Whitman, Theodore Dreiser, and Bellow. In 1950 he won the American Academy award for poetry.

In 1953 Berryman published Homage to Mistress Bradstreet in the Partisan Review (it appeared in book form in 1956). This difficult poem, a tribute to the Puritan poet of colonial America, took Berryman five years to complete and demanded much from the reader when it first appeared with no notes. The Times Literary Supplement hailed it as a path-breaking masterpiece; poet Robert Fitzgerald called it “the poem of his generation.” In fifty-seven stanzas of eight rhymed lines each, the five sections of Homage were positioned symmetrically: Berryman’s invocation of the dead poet, a Bradstreet monologue, a seductive dialogue between the two poets, a second Bradstreet monologue, and finally Berryman’s peroration. Berryman addressed Bradstreet as both lover and listener, extending himself through her tribulations as an exile in the Rhode Island colony. He included personal tragedies such as her heart problems (“wandering pacemaker”), as well as identified with her situation, where he awaits “in a redskin calm.” Their tension is evidenced even in the pauses:

You must not love me, but  I do not bid you cease.

With this work, Berryman emerged as a major literary figure.

During these years, when he won the National Institute of Arts and Letters Award (1950), the Levinson Prize (1950), and a Guggenheim Fellowship (1952), Berryman lectured at the Universities of Washington and Cincinnati and at the Writer’s Workshop at Iowa, his teaching described by poet Philip Levine as “brilliant, intense, articulate” (The Bread of Time [1994]). Berryman’s astounding memory allowed him to quote poetry at great length, and his short story, “Wash Far Away” (not published until 1975, American Review), showed how seriously he considered teaching. His private life, however, was crumbling on account of his alcoholism. He separated from Eileen in 1953 and was dismissed from Iowa after his arrest for public intoxication and disturbing the peace. His treatment by dream analysis he considered publishable. By 1955, assisted by poet Allen Tate, Berryman moved to Minneapolis and was appointed lecturer in humanities (separate from the English department) at the University of Minnesota, which became his home for life. The cycle was nearly complete, as he now lived thirty miles from his suicidal father’s birthplace. At this time he began The Dream Songs, his most significant work.

Divorced in 1956, Berryman married 24-year-old Ann Levine a week later; the couple had a son. Homage to Mistress Bradstreet was nominated for a Pulitzer Prize in 1956; the next year Berryman was promoted to associate professor, and the State Department sponsored him on a lecture tour of India.

In 1958 Berryman was hospitalized for exhaustion; he also legally separated from Ann. In 1959 they divorced, and Berryman was again in the hospital for alcoholism and nerves; for the rest of his life he was hospitalized at least once a year. Over the next three years, Berryman taught at the University of California at Berkeley, at Bread Loaf in Vermont, and at Brown University, and he won awards, published a scholarly edition of Thomas Nashe’s The Unfortunate Traveller, and married Kate Donahue, age twenty-two, in 1961. They had two daughters.

77 Dream Songs (1964) won the Pulitzer Prize. In all, The Dream Songs, published under that title in 1969, stretched to 385 songs and resembled a sonnet sequence, with each song composed in a three-stanza format, eighteen lines with rhyme. Their protagonist, Henry, is a white middle-aged American who talks about himself in first, second, and third voices and listens to his unnamed Friend, a white American in blackface speaking Negro dialect. Henry is greedy, lusty, petulant; he is essentially Freud’s Id. His Friend is conscience, and their dialogue works itself out, as Helen Vendler argues in The Given and the Made (1995), as analysis in the therapist’s office, each song approximating a session on the couch. Henry, speaking with all of Berryman’s baggage—paternal suicide, shameless libido, drunkenness—is allowed to aggress and regress, throwing his anger, fears, and blasphemy up against Friend, a blank wall of therapeutic response. Their comic poise is omnipresent, for example, when Friend condemns Henry for springing on another man’s wife: “There ought to be a law against Henry” (Dream Song 4). At times, Henry’s self-destruction is governed only by personified Ruin staring at him (Dream Song 45), and Henry remains “weeping, sleepless” (Dream Song 29).

To Henry, like Lord Byron’s impetuous Don Juan, life is boring (Dream Song 14); however, Berryman’s twentieth-century man resists rather than indulges. Unlike his Romantic predecessor, Berryman was disgusted with his isomorphic identification with the persona’s desperate uncertainties, and in his volume of Kierkegaard, he underscored the passage: “This form of despair … lowest of all, in despair at willing to be another than himself.”

Berryman was awarded a Guggenheim Fellowship in 1967 to complete The Dream Songs. He lived for a time in Ireland and continued to drink heavily, eventually checking into a Minneapolis hospital for alcohol treatment. Meanwhile, he won the Academy of American Poets and National Endowment for the Arts awards (1967). His Toy, His Dream, His Rest (1968) completed The Dream Songs and won the National Book Award (1969) and the Bollingen Prize. These awards celebrated his distinctive poetic voice, which the New York Times later described as “jaunty, jazzy, colloquial … full of awkward turns and bent syntax” (8 Jan. 1972). In his acceptance speech, Berryman explained his iconoclastic style: “I set up The Dream Songs as hostile to every visible tendency in both American and English poetry.”

After checking into alcohol rehabilitation once in 1969 and three times in 1970, Berryman experienced “a sort of religious conversion” in 1970. He considered Judaism, professed Catholicism, and wrote Recovery (1971), a vague autobiography about alcoholic rehabilitation. His research on Shakespeare continued, but the fatal cycle refused to be broken: haunted by his father’s suicide and with his youngest daughter just six months old, Berryman jumped to his death off the Washington Avenue Bridge in Minneapolis.

In a bathetic line, Berryman wrote, “For I am the penal colony’s prime scribe” (Sonnet 73). Berryman’s reputation varied over his lifetime, from rising star, to a poet of unrealized promise who was largely excluded from anthologies, and finally in the last eight years of his life to the first rank of American poets, whose Dream Songs became a rare book-club poetry selection. The poet’s acute insecurities and neuroses manifested themselves in his public persona as a braggart, a womanizer, a drunk, and an intellectual. But he unleashed the range of colloquial American language in his verse with a lyrical intensity that Lowell called “more tearful and funny than we can easily bear.”

John Berryman’s papers are found at the University of Minnesota, cataloged in Richard Kelly, John Berryman: A Checklist (1972). Berryman’s letters to his mother are published in We Dream of Honour (1988). His essays and short stories are collected in The Freedom of the Poet (1976). An authorized biography is John Haffenden, The Life of John Berryman (1982). First wife Eileen Simpson’s roman à clef, The Maze (1975), gives an insider’s view of a manic poet; her Poets in Their Youth (1982) provides biographical detail. William Heyen, “John Berryman: A Memoir and an Interview,” Ohio Review (Winter 1974): 46–65, presents a vivid picture of the vulnerable and frenzied poet. “Whiskey and Ink, Whiskey and Ink,” Life, 21 July 1967, popularized Berryman in the Dylan Thomas image. Peter Stitt, “The Art of Poetry,” Paris Review 53 (Winter 1972): 177–207, provides a famous interview Berryman gave shortly before his death. Joel Conarroe’s John Berryman (1977) is an excellent overview. An obituary is in the New York Times, 8 Jan. 1972.