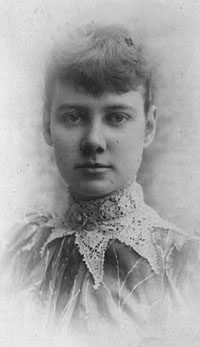 Bly, Nellie (05 May 1864–27 January 1922), reporter and manufacturer, was born Elizabeth Jane Cochran in Cochran’s Mills, Pennsylvania, the daughter of Michael Cochran, a mill owner and associate justice of Armstrong County, Pennsylvania, and Mary Jane Kennedy Cummings. Judge Cochran, the father of fifteen children by two wives, died suddenly without a will in 1870, leaving Mary Jane with little money. Mary Jane’s abusive third marriage to John Jackson Ford ended in divorce in 1878, and “Pink,” as Elizabeth Jane was known, at age fifteen, went off to Indiana (Pa.) Normal School, adding a final e to Cochran at that time. After only one term her money ran out, and she returned to her mother’s home in Apollo, Pennsylvania. She convinced Mary Jane to move to Pittsburgh, where her two older brothers had settled.

Seeing herself responsible for the family’s well-being, Pink Cochrane looked for work, finding much less open to her than to her brothers, who had even less education. A newspaper column by Erasmus Wilson, “The Quiet Observer,” appeared in the Pittsburg[h] Dispatch, decrying the appearance of women in the workforce. Incensed, Cochrane dashed off a long polemic in reply. Signing herself “Lonely Orphan Girl,” she demanded a wider definition of “woman’s sphere,” especially for those with financial responsibility to their families. Editor George Madden saw enough in the letter to think the writer might make a good reporter. He ran a notice on his editorial page asking the “Orphan Girl” to come forward. She did, soon joining the Dispatch staff as “Nellie Bly,” a misspelling of the popular Stephen Foster song “Nelly Bly.” She quickly tired of writing what she considered women’s page drivel and quit before completing her first year. She took off for Mexico with her mother as chaperone, reporting for the first five months of 1886. She returned briefly to the Dispatch as a culture reporter, but that also left her dissatisfied. “Dear Q.O.,” she wrote in a note left on Wilson’s desk one day in the spring of 1887, “I’m off for New York. Look out for me. BLY.”

It took months to find a job in New York City, so Bly supported herself doing freelance work from New York for her old Pittsburgh newspaper. Her piece on how hard it was for a woman reporter to find work in New York—giving her the chance to interview the great editors of the day—led to her first assignment from the New York World: to feign insanity and get herself committed to the Women’s Lunatic Asylum on Blackwell’s (now Roosevelt) Island. Bly stayed ten days in the “madhouse,” taking in the horrendous conditions and keeping her identity secret. Her two-part series in October 1887 was a sensation, effectively launching the decade of “stunt” or “detective” reporting, a clear precursor to investigative journalism and one of Joseph Pulitzer’s innovations that helped give “New Journalism” of the 1880s and 1890s its moniker. The employment of “stunt girls” has often been dismissed as a circulation-boosting gimmick of the sensationalist press. However, the genre also provided women with their first collective opportunity to demonstrate that, as a class, they had the skills necessary for the highest level of general reporting. The stunt girls, with Bly as their prototype, were the first women to enter the journalistic mainstream in the twentieth century.

From the insane asylum, Bly went on to almost weekly exposés of New York’s social evils, from employment agencies for domestic servants to the baby-buying trade to official corruption in the New York legislature in Albany. Always she assayed the universe through a special lens with her own peculiar tint. It was not her wit or investigative skills but her compassion and social conscience, buttressed by a disarming bluntness, that captivated her audience. There was no mind-splitting intellectual insight or noteworthy literary finesse. Bly simply produced, week after week, an uninhibited display of her delight in being female and fearless and her joy in having such an attention-getting outlet.

In November 1889 Bly left on the journey that made her a legend: a “lightning” trip around the world in the fastest time ever achieved: seventy-two days, six hours, eleven minutes, and fourteen seconds. The World covered her journey with day-by-day excitement and a contest, offering a trip to Europe to the person who guessed exactly how long Bly’s journey would take. The adventure made her a national celebrity. Yet she was furious at the newspaper for not rewarding her for the effort, and she quit the World immediately after her triumphant return. She accepted a lucrative three-year contract to produce serial fiction for N. L. Munro’s New York Family Story Paper. She showed no promise in fiction. Three years later, in 1893, she returned to the World, producing splashy interviews with Emma Goldman and Eugene V. Debs, among others, and covering major stories such as the march of Jacob Coxey’s Army on Washington and the Pullman strike in Chicago.

Bly left the World again in 1895 to join the staff of the Chicago Times-Herald but lasted there only six weeks. Just shy of her thirty-first birthday, she married a wealthy New York businessman, Robert Livingston Seaman, who was some forty years her senior. They had no children. Robert Seaman lived another nine years, during which time Bly took over his iron enamel-ware firm, the Iron Clad Manufacturing Co. She also patented, manufactured, and marketed the steel barrel in the United States. She ran her company as a model of social welfare, replete with health benefits and recreational facilities. But Bly was hopeless at understanding the financial aspects of her business and ultimately lost everything. Unscrupulous employees bilked the firm of hundreds of thousands of dollars, troubles compounded by a protracted and costly bankruptcy litigation.

In an effort to obtain new financing, Bly left for Vienna in August 1914 as war was breaking out. She remained until 1919, writing for the New York Evening Journal from the Russian and Serbian fronts in 1914 and appealing for American aid to Austrian war orphans and widows over the next two years. At the war’s end she journeyed in a quasi-official capacity to Paris, where President Woodrow Wilson was attending the Paris Peace Conference. Bly appealed for monetary help for the Austrians to help them fend off Bolshevism, though she was not taken seriously. She returned to New York in March 1919, taking a job at the Evening Journal. She wrote some attention-getting pieces, such as her coverage of the Jess Willard-Jack Dempsey championship bout, but mostly she ran an editorial page advice column. Bly gave advice in her column and then found practical ways to follow up with the people involved. Her most notable efforts in this period involved placing the children of unwed mothers in good homes and her crusade for American seamen, who were having trouble finding work. Bly died of pneumonia complicated by heart disease at St. Mark’s Hospital in New York City. In a published tribute in his New York Evening Journal column in the next day’s newspaper, Arthur Brisbane remembered her as “the best reporter in America.”

Bly’s publications include Six Months in Mexico (1886), Ten Days in a Madhouse (1887), The Mystery of Central Park (1889), and Nellie Bly’s Book: Around the World in Seventy-two Days (1890). Some 600 newspaper stories appeared in the Pittsburgh[h] Dispatch (1885–1887), the New York World (1887–1890; 1893–1896), the Chicago Times-Herald (Mar.–Apr. 1895), and the New York Evening Journal (1914–1916; 1919–1922). Exact citations for these and hundreds of articles about her are in Brooke Kroeger, Nellie Bly: Daredevil, Reporter, Feminist (1994). The biography also includes full documentation on all other information included above. The various Young Adult books on the subject include fictionalized material from earlier undocumented books for juvenile audiences.