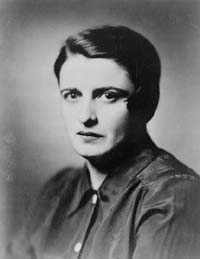 Rand, Ayn (02 February 1905–06 March 1982), writer and philosopher, was born Alissa Rosenbaum in St. Petersburg, Russia, the daughter of Fronz Rosenbaum, a chemist of Jewish descent, and Anna (maiden name unknown). The Russian Revolution, the beginning of which Rand witnessed when she was twelve years old, changed her life. Her family lost its financial and social position, and the remainder of her education, including the study of history at the University of Leningrad (1921–1924), was conducted according to Bolshevik guidelines. Rejecting communist economic and social ideology but not its opposition to religion—Rand abandoned her religious heritage first for secular agnosticism and later for militant atheism—she left the Soviet Union in 1926. She changed her name to Ayn (rhymes with “mine”) Rand (for the Remington-Rand typewriter that she brought with her) when she came to America. After a brief stay with relatives in Chicago, she made her way to California, where she worked as a Hollywood extra and then as a scriptwriter for two years and in wardrobe for another four. She became a naturalized citizen in 1931.

In Hollywood Rand worked hard to improve her English so that she might sell her fiction. Early attempts to find publishers were frustrated by what readers called a style that was too obscure, characters that were too stereotypical, and a philosophy that was too obvious and strident. At last in 1934 she succeeded with a play, Penthouse Legen, which was staged in Hollywood as Woman on Trial and then in New York as The Night of January 16th. From 1935, when the play had its run, until 1943 she lived in New York City, working as a secretary for the Ely Jacques Kahn architectural firm. During that time she published two novels, We the Living (1936) and Anthem (London, 1938). We the Living also had a very brief (five-day) run on Broadway as The Unconquered in February 1940. Using her experience in the architectural firm as background, she began writing the novel that would make her name, The Fountainhead (1943). Reviews of her third novel were generally unfavorable, but it still became a word-of-mouth bestseller. It is the story of Howard Roark, an architect who is such an individualist and so honorable (that is, so true to himself) that when one of his designs is modified (in his view, adulterated) by mediocre minds, he destroys his own work. For the rest of her life Rand expanded on this theme.

Rand returned to Hollywood in 1943 to write the screenplay for The Fountainhead, which was finally released in 1949 (starring Gary Cooper and Patricia Neal), and she stayed to write a number of other screenplays for the Hal Wallis Studios. As a fervent anticommunist, she volunteered to testify against other screenwriters before the House Un-American Activities Committee in 1947. From 1943 until its publication in 1957, she worked on the book that many say is her masterpiece, Atlas Shrugged. This novel describes how a genius named John Galt grows weary of supporting a society of ungrateful parasites and one day simply shrugs and walks away. He becomes an inspiration to like-minded men and women, all of whom eventually follow his example, until society, in its agony, calls them back to responsibility and respect. Again reviews were unsympathetic, and again people bought the book.

After Atlas Shrugged Rand turned to nonfiction in an attempt to answer the moral and philosophical questions that her novels had raised among both her fans and critics. From 1961 until her death more than twenty years later, she published numerous philosophical treatises: For the New Intellectual (1961), The Virtue of Selfishness (1964), Capitalism: The Unknown Ideal (1966), Introduction to Objectivist Epistemology (1967), The Romantic Manifesto and The New Left: The Anti-Industrial Revolution (1971), and Philosophy: Who Needs It? (1982). Much that appeared in these books had been published previously in Rand’s successful periodicals, the Objectivist Newsletter (1962–1965), The Objectivist (1966–1971), and the Ayn Rand Letter (1971–1976). Her philosophy clarified, defended, and expanded on her fiction. It advocated radical individualism, strongly defended capitalism, and decried religion. It appealed to readers who dreamed of succeeding in a system free of all restraint—as well as to those who had succeeded and sought assurance that they deserved the rewards they were enjoying.

Soon after her arrival in Hollywood in 1926, Rand met and three years later married actor Frank O’Connor. They remained married until his death in 1979. He followed her and her career to New York in 1935, back to California in 1943, and back again permanently to New York in 1951, always finding work that enabled him to concentrate his energies on Rand, especially on bolstering her work. It was her decision that they not have children. It was in deference to her that he abandoned his Roman Catholicism. Even her longtime affair with her young disciple Nathaniel Branden did not lead to separation or even public estrangement.

Rand met Branden in 1950, when as a UCLA student he wrote her a fan letter. He became first her adoring pupil; then in the mid-1950s, despite his own marriage to Barbara Weidman, her lover; and finally manager and spokesman for her philosophical movement. Soon after he entered graduate school at New York University in 1951, Rand followed him and Weidman to New York. Later she insisted that the school for training her followers in objectivism, located in Manhattan, be called the Nathaniel Branden Institute. There, in a series of well-attended—and profitable—lectures, Branden expounded Rand’s doctrines to her converts. After eighteen mutually beneficial years their relationship ended when Rand learned that he had another lover. In violent hysteria she severed her relations with both Brandens and ordered her followers to have nothing more to do with either of them.

After 1968, the year of the schism, Rand’s literary and philosophical life slowly came to an end. Following major surgery for cancer in 1975, she discontinued her newsletter. The death of Frank O’Connor in 1979, the year of their fiftieth wedding anniversary, left her alone. She died three years later in her East Thirty-fourth Street apartment, attended only by a nurse. She is buried in Kensico Cemetery in Valhalla, New York.

Rand’s objectivism, as exemplified in her novels and explained in her philosophical writings, stands in sharp contrast to what she condemned as the socialistic, relativistic, fuzzy-minded dominant philosophies of the twentieth century. It holds that “objective reality exists independently of any perceiver or of the perceiver’s emotions, feelings, wishes, hopes, or fears” and that the human mind is capable of perceiving, understanding, interpreting, and applying this objective reality to all of life. Objectivist reasoning and action lead inevitably to an ethic of self-interest, for “the pursuit of his own happiness is a man’s highest moral purpose.” Self-interest in turn leads to capitalism and atheism. In Rand’s words, “I am not primarily an advocate of capitalism, but of egoism; and I am not primarily an advocate of egoism, but of reason.” Her fiction and philosophy have no shades of grays. Asked once if she really believed that all issues are black and white, Rand replied without pause, “You’re damned right I do.”

Assessments of Ayn Rand’s fiction are inevitably affected by the reader’s reaction to her philosophy. Her novels cannot be separated from her philosophy, which admits no middle ground. It is virtually impossible to be objective about objectivism. Thus Rand is destined to be one of the most controversial writers—and thinkers—of her time.

Much of Rand’s correspondence from 1926 to 1981 has been published in Letters of Ayn Rand, ed. Michael S. Berliner, with an introduction by Leonard Peikoff (1955). Barbara Branden and Nathaniel Branden, Who Is Ayn Rand? (1962), written six years before their break with Rand, provides the first biography as well as the first careful explanation of Rand’s philosophy. It is still valuable. Barbara Branden, The Passion of Ayn Rand (1986), is both a biography of Rand and a memoir of Branden’s years as one of Rand’s disciples. It provides important information about Rand’s effect on the Brandens, who divorced, as well as on other devotees (some former) of objectivism. Judgment Day: My Years with Ayn Rand (1989) is Nathaniel Branden’s version of the objectivist experience. It is not as well written as The Passion of Ayn Rand, and it is gratuitous, but despite the self-pitying tone, it does provide an important perspective on the ordeal of Rand’s life. For Rand’s early years and education in Russia see Chris Matthew Sciabarra, Ayn Rand: The Russian Radical (1995). A critical but not wholly unsympathetic profile is Claudia Roth Pierpont, “Twilight of the Goddess,” New Yorker, 24 July 1995, pp. 70–81. A substantial obituary, beginning with her photo on p. 1, is in the New York Times, 7 Mar. 1982.