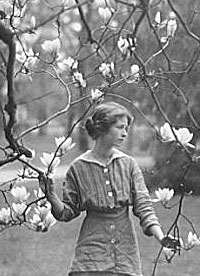 Millay, Edna St. Vincent (22 February 1892–19 October 1950), poet, was born in the small town of Rockland, Maine, the daughter of Henry Tollman Millay, a schoolteacher, and Cora Buzzelle. In 1900 Cora Millay divorced her husband for financial irresponsibility and soon thereafter moved to Camden, Maine, with Edna and her sisters. The hardworking mother supported them by nursing—often overnight—and encouraged her daughters to love reading and music and to be independent. Millay attended public high school, where she wrote for and served as editor in chief of the school magazine (1905–1909). She also published several juvenile pieces in the St. Nicholas Magazine (1906–1910). Her first great poem, “Renascence,” was published in an anthology called The Lyric Year in 1912. When a Young Women’s Christian Association education officer heard Millay read this poem, she helped obtain a scholarship for the talented girl to attend Vassar College.

Millay took preparatory courses for one semester at Barnard College and then entered Vassar in 1913. While there she wrote poetry and plays (published in the Vassar Miscellany), acted, starred in her own play, The Princess Marries the Page, and studied literature and languages. Although she frequently rebelled against rules designed to protect female students, Millay graduated with an A.B. in 1917. That year Millay published Renascence and Other Poems. She moved to New York City, where she acted with the Provincetown Players, lived impecuniously in Greenwich Village, and indulged in love affairs with several men, including the novelist Floyd Dell and, briefly, the married poet Arthur Davison Ficke. She earned a little money by publishing short stories (under the pseudonym Nancy Boyd) and poems in Ainslee’s magazine (1918–1921). In 1919 she wrote and directed a one-act, antiwar verse play with a fairy-tale motif titled Aria da Capo, for the Provincetown Players. During this period she also met the critic Edmund Wilson, at that time the managing editor of Vanity Fair, which had published some of her work (1920). Millay won a $100 prize from Poetry: A Magazine of Verse for “The Bean-Stalk” in 1920. She also published her second book of verse, A Few Figs from Thistles (1920; rev. eds., 1921 and 1922), and Aria da Capo (1920), which sold well.

With an agreement to write for Vanity Fair, the hardworking Millay enjoyed a varied sojourn in Europe from 1920 to 1923. In 1921 she published two more plays and a solid collection of poetry, Second April. Meanwhile, she had other love affairs, including a reported relationship with a French violinist that led to an abortion. She encouraged but soon decided not to marry the poet Witter Bynner. After obtaining a $500 advance from Horace Liveright for a novel titled “Hardigut” that was never completed, she sent for her mother, and the two toured France and England; they then returned to New York. In 1923 Millay was honored as the first woman to be awarded the Pulitzer Prize for poetry. In that same year she published The Harp-Weaver and Other Poems, and after a brief courtship she married the 43-year-old widower Eugen Jan Boissevain; they had no children. He was a burly American importer of Dutch-Irish extraction who was sensitively intelligent, profeminist, and considerate. Millay went on arduous reading tours and sailed around the world with her husband in 1924. The couple bought and occupied “Steepletop,” their permanent home on 700 acres of farmland near Austerlitz, New York, during 1925. Shortly thereafter Millay created the stirring libretto for The King’s Henchman, Deems Taylor’s splendid opera, which premiered at the Metropolitan Opera of New York in 1927 starring the American baritone Lawrence Tibbett. The libretto was published and went through four quick editions, reportedly earning Millay $100 a day for a while.

Later in 1927 Millay became involved in the Sacco-Vanzetti case. Nicola Sacco and Bartolomeo Vanzetti, Italian-born anarchists and labor agitators, had been convicted in 1921 of the 1920 murder of two payroll guards in South Braintree, Massachusetts. The verdict was challenged by those who felt that the two were being persecuted for their history as social activists and anarchists. Although questions about their innocence remained, they were executed on 23 August 1927. Millay and many other intellectuals had joined in a sensational protest, in which she personally appealed to Governor Alvan T. Fuller and was arrested and jailed for joining the “death watch.” In response, Millay wrote and published “Justice Denied in Massachusetts” (New York Times, 22 Aug. 1927). Her involvement in the protest was evidence of her long-standing sympathy for the socialistic aspects of communism. Despite or perhaps partly because of this notoriety, many honors came to Millay, including her election to the National Institute of Arts and Letters (1929) and the American Academy of Arts and Letters (1940). During approximately this same period, however, three deaths severely depressed her. Her close friend, the poet Elinor Wylie, died in 1928, her mother died in 1931, and her estranged father died in 1935.

Given her psychological makeup, Millay had found the ideal husband in Boissevain. He attended to all the household chores, traveled widely with his “Vincent”—often to Florida, the Riviera, and Spain—and cooperated with her intellectual and linguistic interests. He catered to her whims and even condoned her having an occasional lover. One, George Dillon, who was fourteen years her junior and whom she met in 1928 while giving a reading at the University of Chicago, inspired Fatal Interview (1931), a 52-sonnet sequence. In one sonnet she snarls: “Love me no more, now let the god depart, / If love be grown so bitter to your tongue!” Nonetheless, Dillon and Millay collaborated later on translations from Charles Baudelaire’s Les Fleurs du Mal (1936). Still later, in a sonnet in Huntsman, What Quarry? (1939), she says, “As God’s my judge, I do cry holy, holy, / Upon the name of love however brief.” Beginning in 1933, Millay and her husband enjoyed summer retreats on tiny Ragged Island, having bought the 85-acre spot in Casco Bay, Maine. Her other pre–World War II works include The Buck in the Snow (1928), Wine from These Grapes (1934), and Conversation at Midnight (1937); the original, unique manuscript of this dialogue of seven men was burned in a Sanibel Island hotel fire a year earlier.

In Huntsman, What Quarry? Millay had included stirring poems against the brutalities of Fascist Spain, Nazi Germany, and imperialistic Japan. Other events, such as Italy’s attacks on Ethiopia and the German-Russian nonaggression treaty, caused the once-pacifist poet to call for preparedness and then to dash off pro-British and pro-French propaganda verse. Most of her poetry of World War II, much of which she collected in Make Bright the Arrows: 1940 Notebook (1940), has proved vapid, but a memorable exception is The Murder of Lidice (1942). This long, dramatic verse narrative is based on the depraved German army butchery of an entire Czech village.

In 1944 Millay suffered a nervous breakdown and was unable to write for two years. During this time and later, her husband catered to her so selflessly that he depleted his own reserves of strength and died in 1949 of lung cancer followed by surgery and a stroke. Millay, who with her husband had drunk to excess since the 1930s, evidently grew more dependent on alcohol during her brief, inconsolable widowhood. She died sitting at the foot of her staircase, alone, at Steepletop.

Millay is the poetic voice of eternal youth, feminine revolt and liberation, and potent sensitivity and suggestiveness. Her best and most representative themes are bittersweet love, sorrow, the inevitability of change, resignation, death, and ever-abiding nature. One of her very best poems is her early, mystical “Renascence,” about spiritual interment and resurrection through the cycles of nature. It smoothly combines naiveté and profundity and modern and archaic diction. In “Afternoon on a Hill” (published in Renascence [1917]) the delicate persona says, “I will touch a hundred flowers / And not pick one.” She occasionally takes a snide tone in A Few Figs from Thistles (1920); for example, she begins one sonnet with these lines: “I shall forget you presently, my dear, / So make the most of this, your little day.” But the collection also includes “Recuerdo,” which memorably describes the dawn that a happy couple sees from a ferryboat: “The sky went wan, and the wind came cold, / And the sun rose dripping, a bucketful of gold.”

Second April (1921) contains tender elegies to a Vassar friend who died of influenza in 1918. “The Ballad of the Harp-Weaver,” the technically brilliant title poem of Millay’s 1923 collection, dramatizes a mother’s love: a woman too poor to provide necessities for her little son weaves clothes for him by magically playing her harp. In the same book “The Spring and the Fall” bitterly contrasts a lover’s vernal attention and his autumnal gibes and concludes that “’Tis not love’s going hurts my days, / But that it went in little ways.” The Buck in the Snow (1928) proved unpopular, perhaps because it features much experimental verse; for example, “The Pigeons” contains one line of twenty-five syllables. Her imagery grows startling, as when in “On First Having Heard the Skylark” the bird’s cry is “like a crystal dart.”

The bitter philosophical poems in Wine from These Grapes (1934) are well represented by “Apostrophe to Man,” in which, seeming to anticipate World War II, Millay exhorts everyone to “expunge yourself, die out, / Homo called sapiens.” The mounted huntsman in the terse title poem of Huntsman, What Quarry? is tempted to enjoy “a one-night’s bride” but decides instead to go kill the fox. Notable from the posthumous Mine the Harvest (1954) are Millay’s delight that “thought unbraids itself” (“Ragged Island”), her conceited disgust with time-consuming visitors—“What chores these churls do put upon the great” (“Cave Canem”), and Christ’s warning to His followers, “No shelter will be found / Save in my shadow” (“Jesus to His Disciples”).

Millay will always be remembered for her flippant quatrain, which she titled “First Fig” (1920):

My candle burns at both ends;It will not last the night;But ah, my foes, and oh, my friends—It gives a lovely light!

She should also be remembered, however, for her “Second Fig” (1920): “Safe upon the solid rock the ugly houses stand: / Come see my shining palace built upon the sand!” Her “shining” poetry should never fall out of fashion. Its lyricism, praise of beauty, freedom, and individualism, and technical virtuosity are timeless.