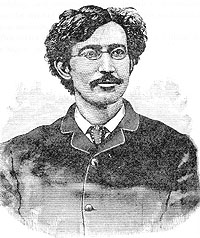 Courtesy of the National Afro-American Museum.

Fortune, Timothy Thomas (03 October 1856–02 June 1928), militant newspaper editor, was born in Marianna, Florida, the son of Emanuel Fortune, a literate slave artisan, and Sarah Jane Moore, a slave. Fortune was raised amid tumultuous times in Reconstruction Florida. His father, one of two African Americans elected as delegates to the 1868 state’s constitutional convention and a member of the Florida House of Representatives, was targeted by the Ku Klux Klan and had to flee the area for months in 1869. Thirteen-year-old Timothy became the man of the house in his father’s absence. “The constant fear, the stories of outrage …, the sign of his once high-spirited mother gradually breaking under the strain of anxiety—all these had a lasting influence on the sensitive and imaginative boy” (Thornbrough, p. 17).

Despite less than three years of formal education, Fortune, an avid reader, enrolled at Howard University during the winter 1874 term. Inadequate finances forced him to leave after one year but not before he managed to complete a few law courses. His later writings would reflect an interest in constitutional law.

Fortune briefly taught school in Florida and worked for the Jacksonville Daily Union. Florida was then a degrading environment for an ambitious and proud African American. He migrated to New York City in 1881 with vivid memories of slavery and the exploitation of the postwar freedmen. Fortune never forgot them and spent his journalistic career supporting their political and economic rights.

During the 1880s, frustrated by the Democratic party’s machinations and the inability of Republicans to protect their rights in the South, a number of African Americans called for political independence in party affiliation. Fortune articulated their grievances in editorials, articles, and several books. He militantly castigated both major parties for their mistreatment of the freedmen. In July 1881 Fortune, George Parker, and Walter Sampson launched the New York Globe. A few months later, Fortune became editor of the Globe, succeeding John F. Quarles. The Globe and its successors, the New York Freeman and the New York Age, would establish Fortune as the dean of black journalists. Under his leadership, they were rated by contemporaries as the most distinguished race papers in the nation.

As editor of the Globe, Fortune attacked the Republicans for not caring “a snap of the finger” for Negroes. He called upon blacks to form a “new honest party.” In 1884 his Black and White: Land, Labor and Politics in the South, a study of contradictory threads, was published. In this study of race and the race problem, Fortune was influenced by the writings of Henry George (1839–1897), the proponent of the single-tax levy. Although Fortune criticized the United States for its brutal treatment of African Americans, he vigorously rejected back-to-Africa proposals. Fortune urged blacks and whites to reject established politics for independent voting and to understand that the future struggle in the South would be between “capital and labor, landlord and tenant.” He informed both that their common enemy was the capitalist and that white workers who denied blacks union affiliation were tools of the ruling class.

In 1886 Fortune published The Negro in Politics, which accused the Republican party of contemptuous treatment of African Americans. He demanded that freedmen place race before party and stop following those leaders who “have swallowed without a grimace every insult to their manhood.” Both Black and White and The Negro in Politics received wide coverage in the African-American press, but few blacks were persuaded to desert the Republican party.

Fortune’s cry for political independence cost him control over the Globe on 8 November 1884, when Parker sold his interest and the purchaser, William Derrick, declared that the Globe would be a Republican paper. Fortune disagreed, and the Republican party refused to subsidize the paper until Fortune resigned. Fortune then established, on 23 November, the Freeman with himself as sole owner, editor, and chief printer. African Americans had considered the Democratic party the party of bigotry, treason, and mob rule. Fortune’s warm praise of Democrat Grover Cleveland raised speculation that he was seeking a political appointment. Fortune denied this assumption and countered that Cleveland would check reactionary forces within his party. Cleveland’s appointment of blacks, Fortune wrote, deserved credit, and he was ready to support him “if the Democratic party pursues a broad, liberal and honorable course toward us” (Freeman, 16 May 1885, p. 2). This political unorthodoxy forced him for financial reasons to sell the Freeman on 8 October 1887 to Jerome B. Peterson and Emanuel Fortune, Jr., his brother. A week later the new owners dissolved the paper and founded the Age. In 1889, after Emanuel Fortune’s death, he accepted the editorship of the Age.

In 1884 Fortune had conceived the idea of a national organization that would fight for the civil and political rights of African Americans. He suggested in a 28 May 1887 Freeman editorial that an all-black organization modeled on the Irish National League was needed. Organized in January 1890, the Afro-American League had as its objectives the protection of black voters in the South; the end of the reign of lynch and mob rule; equal distribution of school funds to both races; eradication of chain gangs and convict leases that exploited blacks; the end of segregated public transportation vehicles; and the end of discrimination by race in hotels, inns, and theaters. Fortune urged African Americans to agitate for their rights, which would make each one “a new man in black … [who] bears no resemblance to a slave, or a coward, or an ignoramus” (Freeman, 28 May 1887). Although it had support from the black press and conventions that were held in 1890 and 1891, the league folded in 1893 because leading black politicians Frederick Douglass, John Mercer Langston, Blanche K. Bruce, and P. B. S. Pinchback refused to support its pointed attacks against the Republican party. The league’s militant vision was later echoed in the modern civil rights movement.

Fortune’s militancy was tempered in 1895 when he engaged in an alliance with Booker T. Washington. Both men were southerners who shared a common interest in self-reliance and manual education. After Washington’s 1895 Atlanta Compromise speech, Fortune sent him a letter of praise. Frederick Douglass had died earlier that year, and Fortune informed Washington, “We must have a leader.” For the next twelve years the two were close friends, and Fortune served as a ghost writer for Washington and editorially defended him from criticisms of younger militants. Fortune’s financial dependency on Washington to publish the Age motivated W. E. B. Du Bois and William Monroe Trotter, editor of the Boston Guardian, to criticize him for being a mouthpiece for Washington. In 1901 Washington became an adviser to President Theodore Roosevelt (1858–1919) on racial matters. For the next six years Washington and Fortune would engage in an enigmatic relationship. At times Fortune would vigorously defend Washington from critics, but there were moments when he could not “reconcile his own views on race matters and politics with the accommodationist views of Washington” (Thornbrough, pp. 217–18). In 1902 his loyalty paid off when Washington arranged for him to receive an appointment as a special agent of the Treasury Department to study race and trade conditions in the Philippines. The seven-month trip cost Fortune dearly in health and finances and made him more dependent on Washington’s support. The alliance between Fortune and Washington became strained when Fortune attacked Roosevelt for his indifference to the plight of mistreated southern blacks and particularly for the president’s decision in 1906 to dishonorably discharge three companies of black soldiers of the Twenty-fifth Infantry stationed at Brownsville, Texas. On the night of 13 August a group of unidentified men killed one person and wounded two others in a shoot-out. The soldiers were blamed, but it was impossible to identify the culprits. None confessed, and not a single soldier offered to implicate his comrades. The black press, including the Age, criticized the president for his unprecedented action.

Since 1900 Fortune’s drinking and depression had alarmed Washington. Concerned with Fortune’s erratic personal and political behavior, Washington, who in early 1907 secretly became a major stockholder in the Age, removed Fortune from the editor’s position. Out of frustration, Fortune wrote to William Monroe Trotter, “Don’t let up on Roosevelt and Taft. Lay it on them thick, as usual.” For the next three years Fortune drank heavily and suffered bouts of depression that caused his friends to worry about his mental stability. During this period his marriage to Carrie C. Smiley, whom he had wed in 1877, and with whom he had five children, ended in a separation that lasted until his death.

Fortune’s health was restored by 1910, and Washington, believing that he had been sufficiently humbled, organized a testimonial for him and returned him to the Age’s editorship in 1911. Fortune left the Age in 1914 because debts kept him in dire financial straits. After Washington’s death the next year, Fortune reflected that he had had more in common with the militancy of Frederick Douglass than with Washington and that he would have been better off if he had never developed an intimate relationship with the educator.

Fortune drifted in and out of writing assignments for the next nine years while he suffered from depression and alcoholism. In 1923 he assumed the editorship of Marcus Garvey’s Negro World. Although he did not accept Garvey’s emigration proposal, nor did he join the Universal Negro Improvement Association, he admired Garvey for his ability to mobilize the masses. For a time he returned to his earlier militancy, urging his readers to eschew political dependency. Later, after Garvey organized a Negro Political Union and instructed his followers to vote for Calvin Coolidge, Fortune, mindful that his anti-Roosevelt editorials had cost him favor, wrote no dissenting views about Coolidge’s presidency.

Fortune died in Philadelphia. The Negro World (9 June 1928) eulogized him as one “who quite as much as Frederick Douglass, perhaps a little more than Booker T. Washington and less than Marcus Garvey, has been a healthful factor in the lives and fortunes of the Negro race in this generation.” He was a visionary whose actions and writings in the 1880s predated the rhetoric of Malcolm X, Stokely Carmichael, and H. Rap Brown. Decades before the cries of “Black Power” and “Black is Beautiful,” Fortune called for race love and unity. Years before the freedom rides, sit-ins, and demonstrations, Fortune called for organization and agitation.

Fortune’s correspondence with Washington is located in the Booker T. Washington Collection, Manuscript Division, Library of Congress. His editorials can be found in the New York Globe, the Freeman, the Age, and the Negro World on microfilm at the Schomburg Center for Research in Black Culture, New York Public Library. See also Emma Lou Thornbrough, T. Thomas Fortune: Militant Journalist (1972), and William Seraile, “The Political Views of Timothy Thomas Fortune: Father of Black Political Independence,” Afro-Americans in New York Life and History 2 (July 1978): 15–28.