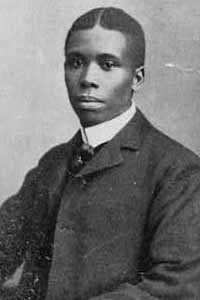 Photograph on the frontispiece of Lyrics of Sunshine and Shadow, 1905.

Dunbar, Paul Laurence (27 June 1872–09 February 1906), author, was born in Dayton, Ohio, the son of Joshua Dunbar, a plasterer, and Matilda Burton Murphy, a laundry worker. His literary career began at age twelve, when he wrote an Easter poem and recited it in church. He served as editor in chief of his high school’s student newspaper and presided over its debating society. While still in school, he contributed poems and sketches to the Dayton Herald and the West Side News, a local paper published by Orville Wright of Kitty Hawk fame, and briefly edited the Tattler, a newspaper for blacks that Wright published and printed. He graduated in 1891 with the hope of becoming a lawyer, but, lacking the funds to pursue a college education, he went instead to work as an elevator operator.

Dunbar wrote and submitted poetry and short stories in his spare time. His first break came in 1892, when the Western Association of Writers held its annual meeting in Dayton. One of Dunbar’s former teachers arranged to have him deliver the welcoming address, and his rhyming greeting pleased the conventioneers so much that they voted him into the association. One of the attendees, poet James Newton Matthews, wrote an article about Dayton’s young black poet that received wide publication in the Midwest, and soon Dunbar was receiving invitations from newspaper editors to submit his poems for publication. Encouraged by this success, he published Oak and Ivy (1893), a slender volume of fifty-six poems that sold well, particularly after Dunbar, an excellent public speaker, read selections from the book before evening club and church meetings throughout Ohio and Indiana.

In 1893 Dunbar traveled to Chicago, Illinois, to write an article for the Herald about the World’s Columbian Exposition. He decided to stay in the Windy City and found employment as a latrine attendant. He eventually obtained a position as clerk to Frederick Douglass, the former abolitionist who was overseeing the Haitian Pavilion, as well as a temporary assignment from the Chicago Record to cover the exposition. After a rousing Douglass speech, the highlight of the exposition’s Negro American Day, Dunbar read one of his poems, “The Colored Soldiers,” to an appreciative audience of thousands. Sadly, when the exposition closed, Chicago offered Dunbar no better opportunity for full-time employment than his old job as elevator boy, and so he reluctantly returned to Dayton. However, he did so with Douglass’s praise ringing in his ears: “One of the sweetest songsters his race has produced and a man of whom I hope great things.”

Dunbar’s determination to become a great writer was almost derailed by a chance to pursue his old dream of becoming a lawyer. In 1894 a Dayton attorney hired him as a law clerk with the understanding that Dunbar would have the opportunity to study law on the side. However, Dunbar discovered that law no longer enthralled him as it once had; moreover, he found that working and studying left him no time to write, and so he returned to the elevator and his poetry. He soon had enough new poems for a second volume, Majors and Minors (1895), which was published privately with the financial backing of H. A. Tobey of Toledo, Ohio. This work contains poems in both standard English (“majors”) and black dialect (“minors”), many of which are regarded as among his best. In 1896 William Dean Howells, at the time America’s most prominent literary critic, wrote a lengthy and enthusiastic review of Majors and Minors’s dialect poems for Harper’s Weekly, a highly regarded literary magazine with a wide circulation. The review gave Dunbar’s career as a poet a tremendous boost. Sales of Majors and Minors skyrocketed, and Dunbar, now under the management of Major James Burton Pond’s lecture bureau, embarked on a national reading tour. Pond also arranged for Dodd, Mead and Company to publish Lyrics of Lowly Life (1896), a republication of ninety-seven poems from his first two volumes and eight new poems. Howells, in the introduction to this volume, described Dunbar as “the only man of pure African blood and of American civilization to feel the negro life aesthetically and express it lyrically.” The combination of Howells’s endorsement and Dunbar’s skill soon led the latter to become one of America’s most popular writers.

After the publication of Lyrics of Lowly Life, Dunbar went on a reading tour of England. When he returned to the United States in 1897, he accepted a position as a library assistant at the Library of Congress in Washington, D.C. Meanwhile, several national literary magazines were vying with one another for anything he wrote, and in 1898 Dunbar seemed to have developed the golden touch. Lippincott’s Monthly Magazine published his first novel, The Uncalled, which appeared in book form later that year; Folks from Dixie, a collection of twelve short stories that had been published individually in various magazines, also came out in book form; and he collaborated with Will Marion Cook to write a hit Broadway musical, Clorindy. At this time he developed a nagging cough, perhaps the result of an abundance of heavy lifting in the dusty, drafty library combined with skimping on sleep while pursuing deadlines. Partly because of his success and partly because of ill health, he resigned from the library at the end of 1898 to devote himself full time to his writing.

In 1899 Dunbar published two collections of poems, Lyrics of the Hearthside and Poems of Cabin and Field, and embarked on a third reading tour. However, his health deteriorated so rapidly that the tour was cut short. The official diagnosis was pneumonia, but his doctor suspected that Dunbar was in the early stages of tuberculosis. To help ease the pain in his lungs, he turned to strong drink, which did little more than make him a near-alcoholic. He gave up his much-beloved speaking tours but continued to write at the same breakneck pace. While convalescing in Denver, Colorado, he wrote a western novel, The Love of Landry (1900), and published The Strength of Gideon and Other Stories (1900), another collection of short stories. He also wrote two plays, neither of which was ever published, as well as some lyrics and sketches. In the last five years of his life, he published two novels, The Fanatics (1901) and The Sport of the Gods (1901, in Lippincott’s; 1902, in book form); two short story collections, In Old Plantation Days (1903) and The Heart of Happy Hollow (1904); eight collections of poetry, Candle-Lightin’ Time (1901), Lyrics of Love and Laughter (1903), When Malindy Sings (1903), Li’l Gal (1904), Chris’mus Is A-comin’ and Other Poems (1905), Howdy, Honey, Howdy (1905), Lyrics of Sunshine and Shadow (1905), and Joggin’ Erlong (1906); and collaborated with Cook on another musical, In Dahomey (1902).

Dunbar had married Alice Ruth Moore in 1898; they had no children. In 1902 the couple separated, largely because of Dunbar’s drinking, and never reconciled. After the breakup Dunbar lived in Chicago for a while, then in 1903 returned to live with his mother in Dayton, where he died of tuberculosis.

Dunbar’s goal was “to interpret my own people through song and story, and to prove to the many that after all we are more human than African.” In so doing, he portrayed the lives of blacks as being filled with joy and humor as well as misery and difficulty. Dunbar is best known for his dialect poems that, intended for a predominantly white audience, often depict slaves as dancing, singing, carefree residents of “Happy Hollow.” On the other hand, a great deal of his lesser-known prose work speaks out forcefully against racial injustice, both before and after emancipation, as in “The Lynching of Jube Benson,” a powerful short story about the guilt that haunts a white man who once participated in the hanging of an innocent black. Perhaps his two most eloquent expressions of the reality of the black experience in America are “We Wear the Mask,” in which he declares, “We wear the mask that grins and lies, … / We smile, but, O great Christ, our cries / To thee from tortured souls arise,” and “Sympathy,” wherein he states that “I know why the caged bird sings, … it is not a carol of joy or glee, / But a prayer that he sends … upward to Heaven.”

Dunbar was the first black American author to be able to support himself solely as a result of his writing. His success inspired the next generation of black writers, including James Weldon Johnson, Langston Hughes, and Claude McKay, to dream of and achieve literary success during the Harlem Renaissance of the 1920s. Because Dunbar had no white ancestors, he was celebrated and scrutinized by the national media as a representative of his race. His charm and wit, his grace under pressure, and his ability as a speaker and author did much to give the lie to turn-of-the-century misconceptions about the racial inferiority of blacks.

Dunbar’s papers are in the archives of the Ohio Historical Society. His poems are gathered in The Collected Poetry of Paul Laurence Dunbar, ed. Joanne M. Braxton (1993). Many of his letters appear in Jay Martin and Gossie H. Hudson, eds., The Paul Laurence Dunbar Reader (1975), which also contains a good biographical sketch of Dunbar and a complete bibliography of his work. Another good biographical source is Tony Gentry, Paul Laurence Dunbar (1989). Kenny J. Williams, They Also Spoke: An Essay on Negro Literature in America, 1787–1930 (1970), places Dunbar’s work in the tradition of black writing as well as American literature in general. His obituary is in the New York Times, 10 Feb. 1906.