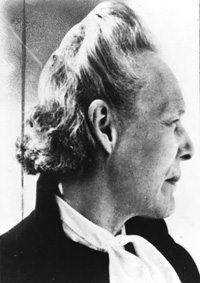 Doolittle, Hilda (10 September 1886–27 September 1961), poet and novelist, was born in Bethlehem, Pennsylvania, the daughter of Charles Leander Doolittle, a professor of astronomy, and Helen Eugenia Wolle. With two older stepbrothers and one older and two younger brothers, the writer who later established herself as “H.D.” was early sensitive to the defining nature of her gender. She was also aware of her special upbringing within the Moravian traditions of her mother’s religion in contrast to her father’s scientific and mathematical aspirations for her. Later in memoirs, poetry, and fiction she would palimpsestically return to these tensions between mother and father, spirit and science, mythic understanding and measured reality.

H.D. was first educated at Moravian schools, then privately in Philadelphia, where her circle of friends widened. In 1901 she met Ezra Pound; in 1905, William Carlos Williams. She graduated from Friends’ Central School in the same year, then for three semesters attended Bryn Mawr College, where Marianne Moore was a classmate. Between 1905 and 1908 she and Pound became intimate friends, and the more worldly writer influenced her reading and poetic aspirations. Later H.D. reflected on this early friendship as well as on her subsequent relations with Pound in her memoir End to Torment (1979).

In 1910 she met Frances Gregg, who soon became her lover. H.D.’s complex relationship with both Pound and Gregg, which encapsulated her struggles with her own bisexuality, later became the basis for her autobiographical novel HER (1981; retitled HERmione by the publisher, New Directions). In the summer of 1911 H.D. sailed with Gregg and her mother to Europe. When the Greggs returned to America in the autumn, however, H.D. remained in London, where through Pound she met other writers and artists, among them Wyndham Lewis, Ford Madox Ford, John Cournos, and Richard Aldington, whom she married in 1913.

During the first years of their courtship and marriage, the Aldingtons established themselves as writers. In 1912 Pound labeled their early verse “Imagiste” and, slashing away with red pencil at what he felt were excessive phrases, signed her poems “H.D.” before sending them off to Harriet Monroe at Poetry. This “naming” was to become symbolic of the struggle for her own identity that H.D. confronted as a woman and writer throughout her life. Her early poems were gathered with verse by others into the modernist anthology Des Imagistes, edited by Pound in 1914. Through work on this volume, H.D. began important friendships with D. H. Lawrence and Amy Lowell. H.D.’s poems appeared in subsequent imagist anthologies in 1915, 1916, and 1917, and her first volume of verse, Sea Garden, was published in 1916. This free verse seemed to her contemporaries “crystalline,” “pure,” “hard,” and “Greek.” Certainly it was new, experimental, and modernist—its stark power exemplified by H.D.’s most anthologized poem, “Oread.” May Sinclair called H.D. “the best of the Imagists,” yet “imagist” was a label H.D. struggled to escape throughout her life as she grew beyond the “doctrine of the image” toward the epic poetry and larger themes of her mature years.

The advent of war in 1914 distressed H.D. Her husband resisted his initial impulse to enlist, becoming increasingly hostile to the social and economic forces causing the war, but he enlisted just before conscription in 1916. H.D. had a stillborn daughter in 1915; she lived alone in Devon and London during Aldington’s absence on the western front. When Aldington returned for officers’ training in 1917, the couple enjoyed a brief period of renewed intimacy; but when they went back to London at the end of the year, the tensions between them intensified. Aldington took a lover, Dorothy Yorke, and soon after he returned to the front in 1918, H.D. left London for Cornwall with the musician Cecil Gray. In July she met Winifred Ellerman (known as Bryher). H.D. also became pregnant in Cornwall with her only child, Frances Perdita, born in 1919. The events of this period became the basis for H.D.’s autobiographical novel Bid Me to Live (1960) and for two novels she did not publish, Asphodel and Paint It Today (both published posthumously in 1992), as well as for her collection of interrelated stories, Palimpsest (1926).

In 1919, after efforts at reconciliation, H.D. left Aldington and began a lifelong relationship with Bryher. They visited Greece together in 1920 and America in 1920–1921. This pattern of frequent travel persisted until illness in the 1950s made it impossible. H.D. balanced periods of retreat in Switzerland with more social periods in Paris and especially in London. Her literary circle grew to include such figures as Sylvia Beach, Nancy Cunard, Norman Douglas, and Dorothy Richardson. After a period of estrangement in the 1920s, H.D. resumed an epistolary friendship with Aldington that continued, with an interruption in the late 1930s and early 1940s, until her death. She divorced Aldington in 1938.

Bryher’s first marriage of convenience (1921–1927) to Robert McAlmon also shaped H.D.’s experience. He was an ally in her intense and often upsetting friendship with Bryher, whose early threats of suicide gave way in the 1920s to more complex manipulation of the woman she supported and loved. H.D. was alternately upset and affirmed by Bryher, whose second marriage of convenience, to Kenneth Macpherson in 1927, veiled an affair of H.D.’s. Her experiences with Macpherson are fictionalized in Narthex (1928), Kora and Ka (1934), The Usual Star (1934), and Nights (1935). Encouraged by Bryher’s and Macpherson’s interest in film, H.D. published reviews in Close Up in 1927–1929 and starred with Paul Robeson in Borderline, an avant-garde film produced and directed by Macpherson and edited by H.D. and Bryher.

H.D.’s interest in psychoanalysis began at least as early as her first sessions with Havelock Ellis in 1919. In 1931, at Bryher’s urging, H.D. began analysis with Mary Chadwick in London. In 1931–1932 she had analytic sessions with Hanns Sachs, and in 1933 and 1934 she underwent periods of analysis with Sigmund Freud in Vienna. Her analysis and friendship with Freud later formed the basis of her memoir Tribute to Freud (1974).

In the late 1930s H.D. became increasingly interested in the hermetic tradition; in the 1940s, in spiritualism and astrology. Her interest in these dimensions of experience influenced such autobiographical novels as the unpublished “The Sword Went Out to Sea” and “White Rose and the Red.” During the Second World War, H.D. left Switzerland for London, where she remained until 1946. This war, which seemed to her a recapitulation of 1914–1918, was fraught with psychological tension exacerbated by the real physical threats of living in England during the blitz. Her verse trilogy—The Walls Do Not Fall (1944), Tribute to the Angels (1945), and The Flowering of the Rod (1946)—gives evidence of her struggles and her spiritual reconciliation of them.

Artistic resolution did not resolve H.D.’s psychic distress, however, and in 1946 she suffered a serious emotional breakdown. She went to a clinic near Zurich, where she recovered, and settled in Switzerland, first in hotels, but after 1956 because of physical ill health in clinics, for the rest of her life. She continued to write throughout the 1950s, and numerous memoirs and reflective journals from this period are among her unpublished work.

H.D.’s relationship with Bryher endured as, ironically, did her relationship with Aldington. These friendships and H.D.’s important relationship with Norman Holmes Pearson, a professor of English at Yale whom she first met while on a visit to the United States in 1937, became especially significant to her in her years of increasing isolation before her death in Zurich. Pearson played a crucial role in arranging publication of H.D.’s work after the war and encouraged her to preserve letters and manuscripts. H.D.’s final years were productive despite incapacitating physical illness, and shortly before her death she finished the epic poem Helen in Egypt, the work many critics feel is her most successful voicing and resolution of the dualities she struggled with throughout her life and work.

During her formative years as a writer and in association with imagism, H.D. was highly regarded by her contemporaries. Aldington never ceased to champion her poetry, and she was praised in print by F. S. Flint and by later scholars of the period, including Glenn Hughes in his pioneering Imagism and the Imagists (1931). But the very movement that established H.D. as a serious artist also froze her reputation, and she strove to overcome the finally trivializing label that ceased to characterize her work at least by the publication of Hymen in 1921 and Heliodora and Other Poems in 1924. Later readers often regretted that she had moved beyond the short, comparatively lucid early poems to the more experimental, complex, and challenging prose and poetry of her maturity. As the work of Pound and T. S. Eliot came to define the era for many critics, H.D. was marginalized: as woman and artist, she was not taken seriously by mainstream scholars establishing the canon. In the late 1960s, with the advent of the women’s movement and fresh attention to the nature of modernism, H.D. began to be read and reread. Many of her books were reissued, and previously unpublished work appeared in print for the first time. Critical and biographical attention from scholars and poets influenced by her writing (such as Robert Duncan and Adrienne Rich) called into question H.D.’s reputation as merely an imagist and established her for many readers as a writer worthy of the same attention as that given to her more widely read male contemporaries. H.D. is now regarded as a major poet, a versatile writer whose exploration of her identity as both woman and artist is central to an understanding of literary modernism.

H.D.’s papers, which include voluminous correspondence as well as unpublished work, are in the Collection of American Literature at the Beinecke Library at Yale University. Other important material by H.D. is in Bryher’s papers, also at Yale. Additional letters are at several other libraries in the United States, including those at Southern Illinois University, the Harry Ransom Humanities Research Centre at the University of Texas, Temple University, and Indiana University.