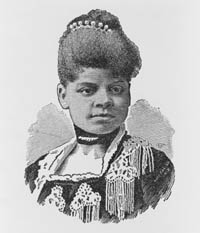 Illustration in The Afro-American Press and Its Editors, by I. Garland Penn, 1891.

Wells-Barnett, Ida Bell (16 July 1862–25 March 1931), editor and antilynching activist, was born in Holly Springs, Mississippi, the daughter of James Wells and Elizabeth Warrenton, slaves. Son of his master, James Wells was a carpenter’s apprentice and opened his own shop after emancipation. The eldest of eight children, Ida attended Rust College in Holly Springs until 1878, when a yellow fever epidemic killed her parents and one of her six siblings (another had died some years before). Determined to keep her family together, Wells began teaching in surrounding areas. In 1881 she moved her youngest siblings to Memphis to live with an aunt and took a job as a schoolteacher in nearby Woodstock.

In September 1883, while commuting by train, Wells was asked to leave the “ladies’ car” and move to the smoking car, where all African Americans were expected to sit. She refused to leave, bit the conductor who tried to remove her, and then filed a successful suit against the railroad. Although the verdict was reversed by the state supreme court, her accounts of the case in a local black newspaper launched her journalism career. Teaching in the Memphis public schools from 1883 until 1891, Wells wrote articles for black newspapers around the nation under the pen name “Iola.” In 1889 she became part owner and editor of the Memphis Free Speech and Headlight. Two years later the school board did not renew her contract after she wrote editorials critical of its actions.

Elected secretary of the black-run National Press Association in 1887, Wells became known as the “Princess of the Press” by her mostly male editorial colleagues. Many felt ambivalent toward this attractive young woman, whose writings were militant and uncompromising. In I. Garland Penn’s The Afro-American Press and Its Editors (1891), fellow editor T. Thomas Fortune noted, “She has become famous as one of the few of our women who handle a goose-quill, with a diamond point, as easily as any man in the newspaper work… . She has plenty of nerve, and is as sharp as a steel trap.” Never hesitant to criticize anyone, no matter how prominent, Wells collected enemies and suitors in almost equal numbers.

In 1892 Wells found a focus for her militancy following a triple lynching in Memphis. After three young black men opened the People’s Grocery, a white competitor’s resentment triggered a chain of events that led to their murders. Earlier lynchings had angered her, but the deaths of three friends brought the evil close to her. She had believed lynchings happened to innocent people but not to respectable ones. Turning the full force of her powerful pen against lynching, Wells attacked the premise that lynching was a necessary deterrent to black rapists. In May she wrote a Free Speech editorial in which she suggested that many rape charges arose from the discovery of voluntary sexual liaisons of white women with black men. While Wells was away, angry whites closed the newspaper office and ran her partner out of Memphis.

Afraid to return home, Wells settled in New York and began writing for T. Thomas Fortune’s New York Age. In June the paper published a lengthy attack on lynching by the thirty-year-old exile. Reprinted as Southern Horrors: Lynch Law in All Its Phases, it became the first of several pamphlets on the subject. In it Wells argued that lynching was often used to counteract black achievement and had grown worse as African Americans became more educated and successful. Although raised in less than a third of all lynchings, charges of rape, she noted, “closed the heart, stifled the conscience, warped the judgment and hushed the voice of pulpit and press.” Proclaiming that “a Winfield rifle should have a place of honor in every black home,” Wells asserted, “The more the Afro-American yields and cringes and begs, the more he has to do so, the more he is insulted, outraged and lynched.”

After African-American women in New York gave Wells a testimonial dinner that raised about $400 for her crusade, she received dozens of lecture requests. On one visit to Philadelphia she met Catherine Impey, an Englishwoman who published the journal Anti-Caste. Early in 1893 Impey joined with Scottish author Isabelle Mayo to invite Wells to tour Scotland and England in the cause of antilynching. Following her first lecture the women organized the Society for the Recognition of the Brotherhood of Mankind, which invited Wells back the next year for a second tour.

The attention of the English press catapulted Wells to the leadership of the antilynching movement. She used all available platforms for her message. At the World Columbian Exposition in Chicago during 1893, she joined with the famous abolitionist Frederick Douglass and Chicago lawyer Ferdinand L. Barnett to circulate a coauthored protest pamphlet. Even after Wells married Barnett in 1895, she continued her activism. Assuming the editorship of her husband’s newspaper, the Chicago Conservator, Wells-Barnett remained a militant voice, giving speeches, investigating lynchings, criticizing Booker T. Washington, starting organizations, and joining movements—while giving birth to four children.

Participating in the founding of such organizations as the National Association of Colored Women (1896), the Afro-American Council (1898), and the National Association for the Advancement of Colored People (1910), Wells-Barnett remained active in few. Her uncompromising attitude alienated many people and prevented effective membership in groups she did not lead. She personally founded the Ida B. Wells Women’s Club in 1893; the Negro Fellowship League, a kind of settlement house for black men, in 1910; and the Alpha Suffrage Club in 1913. That year she desegregated a suffrage march in Washington, D.C., by slipping into the Illinois delegation at the last moment. In addition, from 1913 to 1916 Wells-Barnett served as an adult probation officer in Chicago. Always busy, she was active in the Republican Party and, in the three years before her death, began her autobiography and ran for the state senate. For more than four decades Wells-Barnett’s militant voice brought worldwide attention to the evil of lynching and influenced the course of American reform. She died in Chicago, Illinois.

Wells-Barnett’s papers are in the Regenstein Library at the University of Chicago. Her published writings are reprinted in Selected Works of Ida B. Wells-Barnett, ed. Trudier Harris (1991), and Mildred Thompson, Ida B. Wells-Barnett: An Exploratory Study of an American Black Woman, 1893–1930 (1990). Some of her private writings are in The Memphis Diary of Ida B. Wells, ed. Miriam DeCosta-Willis (1995). Her Crusade for Justice: The Autobiography of Ida B. Wells (1970) was edited by her daughter, Alfreda M. Duster. For a full-length biography, see Linda O. McMurry, To Keep the Waters Troubled: The Life of Ida B. Wells (1998). See also Gail Bederman, “ ‘Civilization,’ the Decline of Middle-Class Manliness, and Ida B. Wells’s Antilynching Campaign (1892–94),” Radical History Review 52 (1992): 5–30, and McMurry, “Ida Wells-Barnett and the African-American Anti-Lynching Campaign,” in American Reform and Reformers, ed. Randall M. Miller and Paul A. Cimbla (1996).