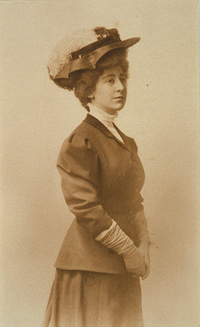 Rankin, Jeannette Pickering (11 June 1880–18 May 1973), first woman in Congress and peace activist, was born near Missoula, Montana, the daughter of John Rankin, a successful developer, and Olive Pickering, a former schoolteacher. The eldest of seven surviving children, Rankin exhibited considerable sangfroid and sense of responsibility from an early age. An indifferent student at Montana State University in Missoula (now the University of Montana), she lacked direction upon her graduation in 1902. Following an eye-opening tour of the slums of Boston in 1904, she enrolled in the New York School of Philanthropy, which later became the Columbia University School of Social Work. After brief and dissatisfying service as a social worker in Spokane, Washington, she enrolled in a wide range of courses at the University of Washington in Seattle, where in 1910 she began her career in woman suffrage. During a visit to her home state in December of that year she stunned the Montana populace when, in an address on behalf of the Equal Franchise Society, she became the first woman to speak to the legislature.

Following a move to New York, Rankin’s talent for public speaking and her commitment to woman suffrage brought her into contact with a broad range of women activists and reformers. The never married Rankin began a lifelong intimate relationship with biographer Katherine Anthony and took part in the great suffrage parade in Washington, D.C., on 3 March 1913, the day before Woodrow Wilson’s inauguration. Although Rankin was a tireless speaker on the rights of women, her attention gradually shifted to the coming war in Europe. In 1916 she ran for U.S. Congress on the Republican ticket, promoting a platform that included votes for women, child protection legislation, and “preparedness for peace.” Despite a near-sweep of Montana elections by the Democrats, she became the first woman to be elected to the U.S. Congress. Her election made her the focus of international attention. Immensely popular, she wrote a weekly newspaper column and shouldered the expectations of a multitude of feminists and woman suffrage activists.

Votes for women, Congresswoman Rankin declared, represented only the first step in the extension of democracy to all phases of American life, and she intended to promote a wide range of reforms. After only four days in office, however, her agenda was hopelessly overshadowed by her vote against U.S. entry into World War I. Not only did she vote with the minority, she violated the precedent of 140 years of roll call when she prefaced her vote with an explanation to publicize her view and ensure its inclusion in the Congressional Record: “I want to stand by my country, but I cannot vote for war.” Despite her subsequent efforts on behalf of American labor and woman suffrage, she failed to be reelected. Reaction among women’s leaders was mixed, but Carrie Chapman Catt of the National American Woman Suffrage Association spoke for the majority when she warned that Rankin’s vote on the war had put the suffrage amendment back by years. Alice Paul of the Women’s party, however, lauded Rankin for showing the potential power of women to diminish war if given appropriate authority.

Leaving Congress in 1919, Rankin attended the Women’s International Conference for Permanent Peace in Zurich, then held a variety of posts in the Women’s International League for Peace and Freedom. The following year she accepted Florence Kelley’s invitation to serve as field secretary for the National Consumers’ League. In Washington, Rankin lobbied successfully for the passage of social welfare legislation, most notably the Sheppard-Towner bill, which she herself had introduced in the Sixty-fifth Congress, aimed at reducing the maternal and infant mortality rate. Her efforts to promote legislation to improve factory conditions met with failure, however, as did her lobbying in 1924 for a constitutional amendment to prohibit child labor. Rankin left the National Consumers’ League in 1924, and although she had purchased a farm in Georgia the previous year, she took a side trip to Montana to campaign on behalf of her brother Wellington Rankin in his unsuccessful bid for the U.S. Senate.

Settling on her Georgia farm in 1925, Rankin worked briefly as field secretary for the Women’s International League for Peace and Freedom. In 1928 she established the Georgia Peace Society and lobbied Congress in 1929 on behalf of the Women’s Peace Union. In November 1929 she began a nine-year stint as lobbyist and propagandist for peace with the National Council for the Prevention of War, under the chairmanship of former Methodist minister Frederick J. Libby. However, as the United States gradually strayed from its official commitment to strict neutrality, Rankin’s marathon of public speeches and radio addresses fell on increasingly deaf ears.

In 1935 Rankin successfully defended herself against charges, reported in the Macon Evening Journal, that she was a communist. She was demoralized the following year, however, when her efforts to undermine the reelection of her old adversary, Representative Carl Vinson, failed. Her increasingly insistent pleas for back salary pushed her relationship with Libby to the breaking point, and she left the National Council in 1939.

In 1939, adamant about preserving American peace, Rankin returned to Montana and, backed by her wealthy brother Wellington, ran again for Congress. As war raged in much of the world, Rankin did not advocate an entirely defenseless America. Rather, she advocated such a strong peacetime military defense that the United States would be impregnable, ignoring the strategic implications of the American possessions that had resulted from earlier territorial expansion. Proclaiming that the country’s real enemies were not foreign nations but rather hunger, poverty, unemployment, and disease, she won with a plurality of 9,264 votes.

Arriving in Washington in 1941, Rankin continued to urge American neutrality. Even in the immediate aftermath of the bombing of Pearl Harbor, she staunchly maintained, “Killing more people won’t help matters” (Josephson, p. 162). As she cast the sole vote against the war resolution, she again violated protocol by stating more than just “nay,” proclaiming, “As a woman I can’t go to war, and I refuse to send anyone else.” Following the vote of 388 to 1, Rankin was obliged to take refuge in a telephone booth and call for security guards to protect her from the angry mob surrounding her. The press was nearly universal in their condemnation of Rankin. Famed journalist William Allen White, however, predicted in the Emporia Gazette (10 Dec. 1941), “When in one hundred years from now, courage, sheer courage based on moral indignation, is celebrated in this country, the name of Jeannette Rankin, who stood firm in folly for her faith, will be written in monumental bronze not for what she did but for the way she did it.” Aware that her reelection was an impossibility, Rankin finished her term opposing wartime fraud and championing free speech.

Rankin returned to Montana in 1943 to care for her aging mother, then traveled extensively for the next twenty years, primarily in India. Her global travels reinforced her commitment to peace as the solution to the world’s troubles. Although her plans to create a woman’s commune on her Georgia property failed to attract any applicants, she returned to the public spotlight on 15 January 1968, leading the Jeannette Rankin Brigade of several thousand marchers in a protest in the nation’s capital against U.S. involvement in Vietnam. She and a group of fifteen other women, including Coretta Scott King, then presented a petition to Speaker John McCormack on behalf of the Women’s Strike for Peace. When asked by a reporter for the San Francisco Examiner (5 June 1970) if she advocated surrender in Vietnam, Rankin replied, “Surrender is a military idea. When you’re doing something wrong, you stop.”

The swelling tide of feminism combined with growing opposition to U.S. involvement in Vietnam made Rankin a noble figure to a new generation of Americans in the late 1960s and early 1970s. Rankin participated in a variety of antiwar protests. She celebrated her ninetieth birthday at a reception and dinner in her honor at the Rayburn House Office Building, where she was feted by friends and associates, including a variety of Congress members and other dignitaries who touted her commitment to peace, child welfare, and civil rights. She continued to promote feminism and peace through print interviews and television appearances until her death, in Carmel, California, a few weeks short of her ninety-third birthday.

In addition to being the first woman to serve in Congress, Rankin was an enormously effective speaker who was instrumental in achieving woman suffrage and challenging common perceptions of war. In her final years Rankin met with consumer advocate Ralph Nader to discuss congressional reform. The relationship between the two seems particularly appropriate. Like Nader, Rankin evoked contradictory reactions among her contemporaries. For many she was impossibly idealistic, while to others she was an inspirational visionary who refused to confuse the realities of the present with the possibilities of the future.

Rankin, impatient with the rigors of formal writing, is best known for her extemporaneous speeches. Moreover, what papers she did leave are widely dispersed. Papers highlighting her congressional years are housed at the Arthur and Elizabeth Schlesinger Library on the History of Women in America, at Radcliffe College in Cambridge, Mass. This collection also includes a documentary film, Jeannette Rankin: First Lady of Peace, produced by Davis Fisher for television station GWTV in Athens, Ga. The papers of Rankin’s administrative secretary, Belle Fligelman Winestine, are housed at the Montana Historical Society Library in Helena. Rankin’s work in the peace movement is found in the files of the National Council for Prevention of War in the Swarthmore Peace Collection at Swarthmore College and is discussed in Harriet Alonso, “Jeannette Rankin and the Women’s Peace Union,” Montana: The Magazine of Western History 39 (1989): 34–49. Rankin was a popular subject in the 1970s, meriting three celebratory but not totally uncritical biographies: Hannah Josephson, Jeannette Rankin: First Lady in Congress (1974); Kevin S. Gile’s unindexed Flight of the Dove: The Story of Jeannette Rankin (1980), based in part on Gile’s twenty-year friendship with Rankin; and Ted Carlton Harris, Jeannette Rankin: Suffragist, First Woman Elected to Congress, and Pacifist (1972). All include bibliographies listing interview tapes and transcripts, unpublished sources, governmental documents, and periodical literature as well as books. Rankin is also a popular subject among children. Judy Rachel Block, The First Woman in Congress: Jeannette Rankin (1978), handsomely illustrated by Terry Kovalcik, is appropriate for grades four through six, while Florence Meiman White, The First Woman in Congress: Jeannette Rankin (1980), targets a slightly more sophisticated audience. An obituary is in the New York Times, 20 May 1973.