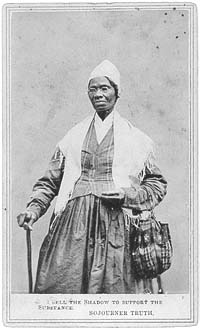 From a carte de visite, possibly made in 1864, with an inscription below the picture: "I sell the shadow to support the substance."

Truth, Sojourner (1799–26 November 1883), black abolitionist and women's rights advocate, black abolitionist and women’s rights advocate, was born in Hurley, Ulster County, New York, the daughter of James and Elizabeth Baumfree, who were slaves. Named Isabella by her parents, she took the name Sojourner Truth in 1843. As a child, Isabella belonged to a series of owners, the most memorable of whom were the John Dumont family of Esopus, Ulster County, to whom she belonged for approximately seventeen years and with whom she remained close until their migration to the West in 1849. About 1815 she married another of Dumont’s slaves, Thomas, who was much older than she; they had five children. Isabella left Thomas in Ulster County after their emancipation under New York state law in 1827, but she did not marry again.

In the year before her emancipation, Isabella left her master Dumont of her own accord and went to work for the family of Isaac Van Wagenen in Hurley. When a member of Dumont’s wife’s family illegally sold Isabella’s son into perpetual slavery in Alabama, she took another remarkable step for a slave: she went to court and sued successfully for her son’s return. She also had a conversion experience, was born again, and joined the newly established Methodist church in Kingston, where she met a Miss Grear, with whom she migrated to New York City in 1828.

In New York Isabella worked in private households and attended both the predominantly white John Street Methodist Church and the African Methodist Episcopal Zion church, where she briefly encountered three of her older siblings who had also migrated to New York City. She adhered to a series of unorthodox religious societies: the Methodist perfectionists led by James Latourette, the urban missionaries to prostitutes of the Magdalene Asylum, and the Sing Sing “kingdom” or commune of the prophet Matthias (Robert Matthews). The Latourettes introduced Isabella to the Magdalene Asylum, where she met Elijah Pierson, a wealthy Pearl Street merchant. While working in Pierson’s household, she met Matthias in 1832. As the only black and one of two working-class members of Matthias’s commune, she believed wholeheartedly in his eclectic mixture of spiritualism, millenarianism, personal anointment, temperance, and holistic health practices. She remained his follower until the commune’s demise in 1835, following allegations of murder and sexual irregularity. After another of the commune’s members charged her with attempted poisoning, she sued successfully for libel and cleared her name. There is no record of her activities between 1835 and 1843, when she did household work in New York City.

Isabella was deeply affected by the millenarian agitation associated with the prophesies of William Miller, who warned that the second coming of Christ would occur in 1843. In the midst of the economic hard times that followed the panic of 1837, she, too, sensed impending doom. On the first of June 1843, acting on the instructions of what she believed to be the Holy Spirit, Isabella changed her name to Sojourner Truth—which translates as itinerant preacher—and set out toward the east to preach the need to embrace Jesus. Traveling to Brooklyn, Long Island, Connecticut, and the Connecticut River Valley, she went from one Millerite camp meeting to another. By the end of the year the Millerites were facing their Great Disappointment, when the apocalypse did not occur, and Sojourner Truth looked for a place to spend the winter.

Truth settled in the Northampton Association, a utopian community dedicated to the cooperative manufacture of silk, located in what is now Florence, Massachusetts. The Northampton Association had been founded in 1842 by several idealists, including George Benson, brother-in-law of the leading white Boston abolitionist, William Lloyd Garrison. The tenor of the Northampton Association was quite liberal; blacks were allowed access, and deep convictions about antislavery and women’s rights were taken for granted. Reformers such as Garrison, the black abolitionist Frederick Douglass, and the British antislavery member of Parliament George Thompson visited the community. Truth made her first appearance at an antislavery meeting in New York City in 1845, while she was living at the Northampton Association. When the association collapsed in 1846 and its lands were subdivided and sold to satisfy creditors, she bought a house on Park Street, paying off the mortgage with proceeds from sales of The Narrative of Sojourner Truth, which she had dictated to Olive Gilbert and had published in Boston in 1850.

During the 1850s Truth supported herself through sales of the Narrative and other mementos to reform-minded audiences. Sometime in about 1847 she uttered the words that were her most famous in the nineteenth century. Truth was in the audience at Faneuil Hall in Boston when Frederick Douglass, despairing that slavery could be abolished peaceably, began to advocate insurrection. Indicting his lack of faith in God’s goodness, Truth stood up and asked, “Frederick, is God dead?” To evangelically attuned, nineteenth-century sensibilities, her trust was more appealing than his radicalism. She and Douglass both spoke at a women’s rights convention in Worcester, Massachusetts, in 1850. She addressed a similar gathering of Ohio feminists in Akron in 1851, giving what today is her most famous speech. Demanding that poor and working women also be counted as women, Truth was later quoted as having posed the rhetorical question, “and ar’n’t I a woman?” which would make her reputation among twentieth-century feminists.

Truth visited Harriet Beecher Stowe, author of Uncle Tom’s Cabin, in 1852 or 1853. Stowe wrote a preface to a new edition of The Narrative of Sojourner Truth and took notes for the essay that most effectively publicized Truth during her lifetime. Stowe published her widely cited “Sojourner Truth, the Libyan Sibyl” in the April 1863 Atlantic Monthly; her title, “Libyan Sibyl,” crops up in connection with Sojourner Truth throughout the rest of the century.

In 1856 Truth sold her house in Massachusetts and moved to Michigan, where she was close to her daughters and their families, abolitionist supporters, Quakers of various sorts, spiritualists, and relatives of her Rochester friends Amy Post and Isaac Post (including Frances Titus, who edited the 1875/1878 edition of the Narrative). Truth also may have been in contact with a branch of Millerites who, under Ellen White, became the Seventh Day Adventists. Although she spent most of her time in Michigan in the town of Battle Creek, Truth joined what was at least her third planned community: she bought a house in 1857 and lived for several years in Harmonia, a community of progressive Friends. She continued her lecture tours throughout the 1850s. In a small town in northern Indiana in 1858 she faced down critics who doubted that so forceful an abolitionist could be a woman, by baring her breast and shaming her antagonists. In 1867 she built a house big enough for her daughters and their families on College Street in Battle Creek, making her remarkable among blacks for her real estate holdings.

During the Civil War Truth met President Abraham Lincoln in his office in 1864 and worked with volunteers assisting southern black refugees. During her stay in Washington she went to court to appeal successfully for her rights for a third time, asking for the right to ride what had been Jim Crow streetcars. Realizing that charity was only a palliative, and appalled by the freedpeople’s continuing poverty, Truth initiated an effort to find them jobs in and around Rochester, New York, and Battle Creek, Michigan, in 1867. When this task overwhelmed her, she conceived of a plan for resettling freedpeople on government lands in the West. Traveling through New England, the Northwest, and into Kansas in 1870 and 1871, she collected signatures on a petition to Congress, but Congress never allocated any land to African Americans in the West or the South. In 1879, after Truth had retired, a spontaneous migration to Kansas of black Exodusters from Texas, Louisiana, Mississippi, and Tennessee took tens of thousands out of the post-Reconstruction South in which they justifiably feared reenslavement. Truth was unable to return to Kansas in support of the Exodusters. She died in Battle Creek.

In the nineteenth century, this tall, dark-skinned, charismatic, illiterate wisewoman who dressed like a Quaker was best known as a Methodist-style itinerant preacher and religiously inspired supporter of women’s rights and the abolition of slavery. A familiar figure in reform circles, she also advocated temperance and associated with spiritualists and water-cure enthusiasts. In her own day she presented herself as the quintessential slave woman. In modern times she has come to stand for the conjunction of race, class, and gender in American liberal reform and symbolizes the unintimidated, articulate black woman. Acutely intelligent although totally unschooled, Truth represents a type of inspired, naive witness that has long appealed to Americans suspicious of over-education.

There are no Sojourner Truth papers. The richest manuscript collection on Truth is the Family Papers of Isaac and Amy Post in the Library of the University of Rochester. Photographs of Truth are in the Sophia Smith Collection at Smith College and the Detroit Public Library. The most useful published sources are Nell Irvin Painter, Sojourner Truth: A Life, a Symbol (1996); Jacqueline Bernard, Journey toward Freedom: The Story of Sojourner Truth (1967; 1990 ed. includes an updated bibliography); Arthur Huff Fauset, Sojourner Truth: God’s Faithful Pilgrim (1938); three articles by Carleton Mabee: “Sojourner Truth, Bold Prophet: Why Did She Never Learn to Read?” New York History, Jan. 1988, “Sojourner Truth and President Lincoln,” New England Quarterly 61, no. 4 (1988), and “Sojourner Truth Fights Dependence on Government: Moves Freed Slaves Off Welfare in Washington to Jobs in Upstate New York,” Afro-Americans in New York Life and History 14, no. 1 (1990); Victoria Ortiz, Sojourner Truth, a Self-Made Woman (1974); Painter, “Sojourner Truth in Life and Memory: Writing the Biography of an American Exotic,” Gender and History 2, no. 1 (1990); see also Painter’s “Introduction” to the 1990 edition of Bernard, Journey toward Freedom, and her “Sojourner Truth in Feminist Abolitionism: Difference, Slavery, and Memory,” in Jean Yellin and John Van Horne, eds., An Untrodden Path: Antislavery and Women’s Political Culture (1992); Hertha Pauli, Her Name Was Sojourner Truth (1962); Dorothy Sterling, ed., We Are Your Sisters: Black Women in the Nineteenth Century (1984); and Jean Fagan Yellin, Women and Sisters: The Antislavery Feminists in American Culture (1989). The speech “Ar’n’t I a Woman,” reported by Frances Dana Gage, is to be found in the 1875/1878 and 1884 editions of The Narrative of Sojourner Truth, pp. 131–35, and in Elizabeth Cady Stanton et al., eds., History of Woman Suffrage, vol. 1 (1881), pp. 115–17.