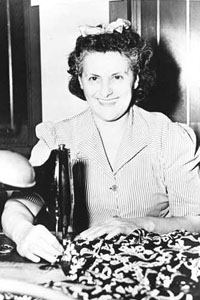 Pesotta, Rose (20 November 1896–07 December 1965), labor organizer and union officer, was born in Derazhnya, Ukraine, Russia, the daughter of Itsaak Peisoty and Masya (maiden name unknown), grain merchants. Despite the pogroms and social unrest of prerevolutionary Russia, she enjoyed a happy, traditionally Jewish childhood. Her formal education consisted of two years at Rosalia Davidovna’s school for girls and tutoring at home. Equally important was her political apprenticeship in local leftist groups. She read Kropotkin, Bakunin, and Proudhon and joined the political activity of the young radicals, which opened a window on the possibilities of a wider world. She found in the movement female role models who renounced traditional marriages to devote themselves to the revolutionary cause. She rebelled against her parents’ plan to marry her to a local boy and in 1913 joined her sister in the United States, where “a decent middle class girl can work without disgrace.” At Ellis Island, her name was changed to Pesotta.

The twin pillars of Pesotta’s life were anarchism and the labor movement. Introduced to anarchism before she emigrated from Russia, she quickly became involved in the movement in the United States. Pesotta was drawn to anarchism by its celebration of the inherent goodness of the individual and its rejection of private property, the state, and authority. Like other women attracted to the movement, Pesotta perceived support for sexual freedom embedded in anarchist tenets of personal freedom. Her devotion to anarchism was also inspired by Emma Goldman. She first heard Goldman speak in 1914 and maintained an active correspondence with her after Goldman was deported. Pesotta’s sister Esther summed up Goldman’s influence: “Emma helped Rose to believe in anarchism like a rabbi believes in God.” During the 1920s, Pesotta was secretary of the anarchist publication the Road to Freedom.

The 1921 Nicola Sacco and Bartolomeo Vanzetti case intensified Pesotta’s commitment to anarchism. She believed in the innocence of the two anarchists accused of robbery and murder and worked tirelessly for their exoneration. She was devastated by their execution in 1927 and years later bitterly labeled their death “blood on the conscience of America.”

Pesotta worked in New York City’s garment factories for the next twenty years after entering the United States. She became active in the International Ladies’ Garment Workers’ Union through her local’s education department and in 1920 was elected to the local’s executive board. She attended the Bryn Mawr Summer School for Women Workers in 1922 and Brookwood Labor College in 1924–1926. Her commitment to purging communists from the union attracted the attention of the union leadership, and she was appointed as an organizer in the late 1920s. In 1934 she was elected vice president of the union and served on the General Executive Board. She helped the union capitalize on the hospitable climate for labor created by the New Deal by organizing in Puerto Rico, Montreal, Los Angeles, Cleveland, and a number of other cities. She assisted the United Auto Workers in organizing sit-down strikes in Akron, Ohio, in February 1936 and in Flint, Michigan, in December 1936 and January 1937. Frustrated by the persistent sexism of the union, such as its practice of allowing only one woman at a time to serve the General Executive Board, she left organizing to return to the shops in 1942 and in 1944 resigned from the General Executive Board.

In 1945 Pesotta accepted a position as a fundraiser for the Anti-Defamation League of B’nai B’rith. She worked briefly in 1950 for the American Trade Union Council for Histadrut, the labor organization of Israel. That same year she returned to the garment shops of New York City where she worked until shortly before her death in Miami.

Pesotta published two autobiographical books. The first, Bread upon the Waters (1944), was a lively memoir of her labor organizing during the 1930s. Although union officials objected to Pesotta’s critical assessment of union leadership in Los Angeles, especially in recruiting, the book found a popular audience among those who enjoyed its buoyant picture of depression-era labor organizing. It quickly went into a third printing and was translated into Japanese, Spanish, and German. In 1958 Pesotta published Days of Our Lives, a sentimental remembrance of her coming of age in Russia. Privately published, it never achieved the success of Bread upon the Waters.

It is unknown whether Pesotta ever married. Her romantic relationships tended to be passionate and unhappy, oscillating between elation and despair. She had numerous lovers, several of whom were married, and claimed to have married twice. The most important relationship was with Powers Hapgood, a fellow labor organizer.

Pesotta was an intense and charismatic woman, beloved by the thousands of women workers she organized, but her life was largely tragic. The union whose faults she could see so clearly turned a deaf ear to her pleas to become more inclusive of its female and multiethnic membership. By doing so, it lost the services of one of its most talented leaders.