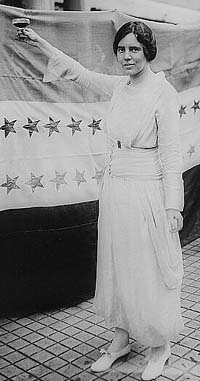 Paul, Alice (11 January 1885–09 July 1977), women's rights leader, women’s rights leader, was born in Moorestown, New Jersey, the daughter of William M. Paul, a banker and businessman, and Tacie Parry. The oldest of four children, she grew up in material comfort, nurtured by devout parents who instilled in their children Quaker principles of social justice, equality, and service. After graduating from Swarthmore College in 1905, Paul served a social work internship on New York City’s Lower East Side, where she helped to organize women workers. She earned an M.A. in sociology from the University of Pennsylvania in 1907 and completed her Ph.D. there in 1912 with a dissertation on the legal rights of women in the state. Later she earned a law degree from Washington College of Law in 1922 and a Ph.D. in law from American University in 1928.

When Paul went abroad in 1907 for further education and practice in social work, she became involved in the British suffrage movement, an experience that redirected her life’s work and shaped the history of American feminism. Paul’s mother had taken her to suffrage meetings, but Christabel Pankhurst and the British suffrage militants ignited her passion for women’s rights. From 1908 until she left England in 1910, Paul campaigned for suffrage with the Women’s Social and Political Union. Participating in its militant tactics, Paul was arrested and imprisoned several times for disorderly conduct and disturbing the peace. Along with her British colleagues she went on hunger strikes in jail and endured the ordeal of force feeding.

Paul returned home to a suffrage movement bogged down in state-by-state campaigns that claimed only nine full-suffrage states by 1912. Considering that approach a waste of time, Paul favored pushing for a federal amendment to the Constitution that would enfranchise women nationwide. In 1913 she and Lucy Burns, a Vassar graduate whom she had met in the British movement, assumed leadership of the National American Woman Suffrage Association’s (NAWSA) Congressional Committee. Paul organized a lobbying effort and sought to awaken public interest with a spectacular parade of 5,000 suffragists in the nation’s capital to coincide with the inauguration of Woodrow Wilson.

When NAWSA leaders grew fearful that aggressive strategy and tactics would hurt their cause, Paul and Burns left the organization and formed the Congressional Union, renamed the National Woman’s party (NWP) in 1916. Its members, predominantly white and middle-class like their NAWSA counterparts but somewhat younger, were inspired by Paul’s commitment to militance. She stirred in them the intention to seize their rights rather than beg for them and induced them to risk their respectability and even personal freedom on behalf of suffrage.

Paul’s strategy of working to defeat Democratic candidates in order to hold the party in power responsible for a federal suffrage amendment bore little fruit. In contrast, dramatic tactics in Washington, D.C., proved highly effective. In an effort to force President Wilson into support for the suffrage amendment, beginning in January 1917 the NWP stationed pickets in front of the White House, the first group ever to do so. After the United States entered World War I in April, they carried signs exposing the hypocrisy of fighting for democracy abroad while denying it to women at home. While NAWSA leaders condemned the picketers, passersby outraged by the suffragists’ challenges to Wilson lashed out at the militant suffragists with verbal harassment and even physical attacks.

Authorities went after the NWP women rather than the mobs, and when Paul refused orders to cease the picketing police began to jail the women in the Occoquan Workhouse in Virginia. Paul landed there in October 1917 and with several others began a hunger strike in an effort to be recognized as political prisoners. Officials responded by pushing tubes through their noses to force feed them, separating Paul from her colleagues, and putting her under psychiatric evaluation. (The psychiatrist pronounced her sane and compared her to Joan of Arc—one who would die for her cause but never give up.) The suffrage captives managed to publicize the bad conditions of their incarceration, evoking public sympathy and an official investigation. They were released at the end of November, and in January 1918 Wilson announced his support for the amendment. While Congress debated, those who had been jailed traversed the country wearing prison outfits and giving speeches. Not until Congress passed the amendment in 1919 did the NWP’s militant protest cease. Nor did Paul stop its lobbying efforts until ratification was accomplished in 1920.

After winning suffrage, some NWP members wanted the organization to adopt a broad feminist program. Crystal Eastman, Florence Kelley, and others proposed that the NWP support birth control, peace, voting rights for black women, and other social issues. But Paul used her forceful personality and help from her allies to focus the NWP on the single issue of obtaining for women the same legal rights as men enjoyed. To this end, Paul drafted an equal rights amendment (ERA) to the Constitution, which was introduced into Congress in 1923 and which stated simply that “men and women shall have equal rights throughout the United States.” The proposed ERA drove a deep wedge between former suffragists. Most politically active women opposed it because it would abrogate the protective labor laws that reformers (including Paul) had worked so hard to obtain for women workers. Paul’s strategy was not to seek a large membership for NWP but to convert national women’s organizations to support of the amendment, and by the 1950s she had succeeded in large measure.

After 1920 Paul gave up official leadership of the NWP, except for a few years in the 1940s. Yet she dominated the organization even without a formal post. When she was in Washington, D.C., she lived and worked at Belmont House, the NWP national headquarters named for its benefactor Alva Belmont. International women’s rights claimed much of her attention from the mid-1920s until World War II. The NWP labored in vain to get the Pan American Congress and the League of Nations to adopt equal rights treaties, and Paul spent considerable time abroad during the 1930s. In Geneva she lobbied the League, served as consultant to a committee investigating women’s needs, and founded the World Woman’s party in 1938. That group helped to get the principle of equal rights for women included in the preamble to United Nations charter.

In 1941 World War II sent Paul back to the United States where she again took over as chair of the NWP. The need for women’s contributions to the war and the wartime suspension of protective labor legislation gave the ERA a shot in the arm. Both parties endorsed the proposed amendment, Congress debated it, and increasing numbers of women’s groups registered support. But the NWP suffered when one faction mounted a challenge to Paul’s hand-picked successor in 1947. Before the split was patched over, lawsuits sundered the NWP, and Paul faced personal attacks as well as charges that she had misused party funds. She also alienated liberals with her support of Senator Joseph McCarthy and his crude anticommunism.

While the schism weakened Paul’s leadership, it did not diminish her relentless pursuit of equal rights for women. During the 1950s she pressured Congress to attach amendments to civil rights bills that would prohibit sex discrimination as well. When Congress debated the Civil Rights Act of 1964, the NWP pushed the same approach, getting Howard Smith, the conservative congressman from Virginia, to sponsor an amendment adding “sex” to Title VII, the section prohibiting discrimination in employment. The amended Title VII not only represented a critical breakthrough for women in employment rights but it also helped to spark the resurgence of a mass feminist movement and the founding of the National Organization for Women (NOW) two years later.

Paul responded to NOW leaders’ invitation to join, but she was never very much in tune with the new organization, even though NWP members got it to endorse the ERA in 1967. She expressed annoyance at the younger women’s ignorance of their feminist history (which included her own labors) and dismay at their agenda’s inclusion of such issues as abortion and lesbian rights. Straying from a focus on legal equality, she believed, would scatter energies and create opposition to the ERA. Although somewhat alienated from the women’s movement and in failing health, Paul used her contacts in various states to mobilize ratification efforts. She died in a Quaker nursing home in Moorestown, New Jersey, while the fate of the ERA remained uncertain.

Trying to capture her subject for Everybody’s magazine in 1919, Anne Herendeen wrote, “There is no Alice Paul. There is suffrage. She leads by being … her cause.” Though she loved books, during the suffrage struggle she denied herself the pleasure of any reading that did not relate to suffrage. This self-sacrificing single-mindedness contributed to Paul’s charismatic leadership. She possessed an enormous ability to motivate others, a flair for organization, and a tenaciousness that sustained her half-century pursuit of the ERA.

Although many feminists adored Paul, she also aroused strong negative feelings. She was elitist, autocratic, and domineering. Shy and often aloof, Paul operated with an abruptness that appeared as insensitivity, and she rarely expressed the appreciation that hard-working colleagues felt they deserved. Although Paul had cordial relationships with Mary Church Terrell and other African-American women and calculated the value of their support for suffrage and the ERA, she did not hesitate to dilute black women’s participation in party events in order to appease southern members. Paul rebuffed pleas to have the NWP concern itself with violations of black women’s right to vote; that was a racial, not a feminist, issue, she asserted, and beyond the scope of her organization. She also expressed anti-Semitism even though she had at least one close friendship and working relationships with a number of Jewish women. Paul believed that a single-minded focus on legal equality could unite all women. However, such a strategy could not encompass the loyalties and needs of many women that were related to their race, class, or other identifications. Consequently, the NWP practiced a very exclusive form of feminism.

Yet, Paul and the NWP made critical contributions to the struggle for woman suffrage. The NWP’s militant tactics won visibility for suffrage and pushed Wilson to support the Nineteenth Amendment. Moreover, those tactics helped make the mainstream suffragists in NAWSA more palatable to the men whose support they needed. Paul also played a vital role in sustaining feminism during the years after suffrage and in laying a foundation for the resurgence of a mass movement in the 1960s. She pioneered in the strategy of linking women’s rights to black civil rights. And her steadfast pursuit of the ERA handed the new feminists of the 1960s a ready-made issue, one that they failed to realize but that they used to mobilize a mass movement that achieved a host of other feminist goals.

Paul’s papers are among those of the National Woman’s party at the Library of Congress, Washington, D.C. “Conversations with Alice Paul” is a 671-page oral history conducted by Amelia R. Fry (1971–1973) as part of the Suffragists Oral History Project at the Bancroft Library at the University of California at Berkeley. The fullest historical treatments of Paul’s work are Christine A. Lunardini, From Equal Suffrage to Equal Rights: Alice Paul and the National Woman’s Party, 1910–1928 (1986); Nancy F. Cott, The Grounding of Modern Feminism (1987); Linda G. Ford, Iron-Jawed Angels: The Suffrage Militancy of the National Woman’s Party, 1912–1920 (1991); Susan D. Becker, The Origins of the Equal Rights Amendment: American Feminism between the Wars (1981); and Leila J. Rupp and Verta Taylor, Survival in the Doldrums: The American Women’s Rights Movement, 1945 to the 1960s (1987). Articles about Paul include Amelia R. Fry, “Breaking the Chains: Alice Paul and the ERA,” Social Education 59 (1995): 285–89; Sally Hunter Graham, “Woodrow Wilson, Alice Paul, and the Woman Suffrage Movement,” Political Science Quarterly 98 (Winter 1983–1984): 665–79; and Jean L. Willis, “Alice Paul: The Quintessential Feminist,” Feminist Theorists, ed. Dale Spender (1983). Two of Paul’s colleagues provided accounts of the NWP: Inez Haynes Irwin, The Story of the Woman’s Party (1921), and Doris Stevens, Jailed for Freedom (1920). Obituaries are in the New York Times and the Washington Post, both 10 July 1977.