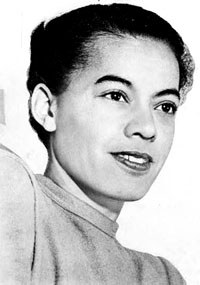 Murray, Pauli (20 November 1910–01 July 1985), lawyer, writer, and minister, was born Anna Pauline Murray in Baltimore, Maryland, the daughter of William Henry Murray, a public school teacher, and Agnes Fitzgerald, a nurse. Triracial, she had African, European, and Native American ancestry. Her parents both died when she was a child (her mother had a cerebral hemorrhage in March 1914; her father was murdered in a state hospital in June 1923), and she grew up from age three in North Carolina with her maternal grandparents and her mother’s oldest sister, Pauline Fitzgerald Dame, a public school teacher who adopted her.

Murray graduated in 1926 from Hillside High School (which went only through grade eleven) in Durham, North Carolina, and then lived with relatives in New York City and graduated in 1927 from Richmond Hill High School. After working for a year in Durham for a black newspaper and a black insurance company, she returned to New York and entered Hunter College in 1928. She changed her name to Pauli, and, after time out for work and for what proved only a brief marriage (1930; later annulled), earned a B.A. in English in 1933. She spent a year as field representative for Opportunity magazine, the voice of the National Urban League. She worked for four years (1935–1939) with the Works Progress Administration as a remedial reading teacher and then with the Workers’ Education Project. Wishing to return home, she applied in 1938 for graduate study at the University of North Carolina, where her white great-grandfather had studied and his father had been a trustee, but that school rejected her because of her race.

Murray was active in civil rights in the 1940s. The first time was unintended, when she found herself arrested for “disorderly conduct” in March 1940 in Petersburg, Virginia, while taking a bus south to visit her family in North Carolina. Determined to implement what she understood of Gandhi’s Satyagraha (nonviolent direct action)—despite what she later termed her “urge toward kamikaze defiance of Jim Crow”—she challenged the constitutionality of segregating interstate bus passengers. She courteously demanded fair treatment in jail while awaiting trial; returning to jail rather than pay the fine when she was convicted, she nonetheless learned that “creative nonviolent resistance could be a powerful weapon in the struggle for human dignity.” In 1940–1942 she worked with the Workers Defense League in a coast-to-coast campaign for a new trial for Odell Waller, a black sharecropper who, convicted by an all-white jury of men who had paid their poll taxes, was eventually executed for the murder of his landlord in Pittsylvania County in Virginia.

Deciding to obtain a graduate degree so that she could return to teach law at Howard, she applied to Harvard Law School, but that school rejected her because of her gender. She went instead to Boalt Hall at the University of California at Berkeley, where she earned an LL.M. in 1945 with a thesis titled “The Right to Equal Opportunity in Employment.” Years later, she attended Yale University Law School, where she earned a J.D.S. in 1965 with a dissertation titled “Roots of the Racial Crisis: Prologue to Policy.” She abandoned her plans to teach at Howard when her mentor there, Leon A. Ransom, was bypassed in 1946 for the deanship. Between her studies at Berkeley and Yale, she worked briefly as deputy attorney general in California and for the American Jewish Congress’s Commission on Law and Social Action in New York, passed the bar exams in California and New York, ran as a Liberal party candidate for a seat on the City Council from Brooklyn in 1949, and from 1946 to 1960 spent much of her time in private practice in New York, eventually (1956–1960) in the law firm of Paul, Weiss, Rifkind, Wharton, and Garrison.

Race, Murray had learned, was not the only major obstacle to a black woman’s educational and professional advancement. She contributed to the theory of litigation against the constitutionality of discrimination on grounds of either race or sex. She served on the President’s Commission on the Status of Women (1962–1963), and she contributed to passage of the 1964 Civil Rights Act with a ban on sex discrimination in employment. In 1966 she was a founding member of the National Organization for Women, established as a feminist counterpart to the National Association for the Advancement of Colored People. And she conceived her last major work, Song in a Weary Throat: An American Pilgrimage (1987), as “an autobiographical book on Jim Crow and Jane Crow” alike, on the costs of and struggles against segregation and discrimination by gender as well as by race.

As she made her political and spiritual pilgrimage through the twentieth century, Murray changed professions from time to time. Leaving her position with the New York law firm, she taught in West Africa at the Ghana Law School in Accra (1960–1961) and, after her studies at Yale, she served as vice president at Benedict College, a black school in South Carolina (1967–1968). In 1968 she accepted a temporary position at Brandeis University. Five years later she relinquished a tenured position there as the Louis Stulberg Professor of Law and Politics in the American Studies department, for she felt called to the Episcopal ministry, and in 1976 she earned an M.Div. from the General Theological Seminary in New York City. That year the Episcopal church changed its policy to permit the ordination of women priests, and in January 1977 at the National Cathedral in Washington, D.C., she was ordained and consecrated one of the church’s first female priests and the first who was black. From 1977 to 1984 she served churches in Washington, D.C., and Baltimore, Maryland.

An accomplished writer as well as lawyer, educator, and minister, Murray gave the term “confrontation by typewriter” to the use of her talents in seeking change by writing letters to newspapers and public officials. She published essays and articles in progressive magazines and in law and theology journals, compiled States’ Laws on Race and Color (1951), and coauthored The Constitution and Government of Ghana (1961). She wrote an account of her North Carolina family and childhood, Proud Shoes: The Story of an American Family (1956), a volume of poetry, Dark Testament and Other Poems (1970), and her posthumously published, award-winning Song in a Weary Throat, which was republished as Pauli Murray: The Autobiography of a Black Activist, Feminist, Lawyer, Priest, and Poet (1989).

At the forefront of social change in the United States from the 1940s to the 1980s, Murray achieved prominence as a lawyer, poet, educator, and minister. She worked to promote the rights of workers during the New Deal, of African Americans, notably in the 1940s, and of women, especially in the 1960s, as she demonstrated her commitment to “consciousness combined with action” and “reconciliation as well as liberation.” By the 1970s she could note with some pleasure that, though she routinely lost her legal challenges in the 1930s and 1940s, the Supreme Court eventually decided cases the way she had hoped, and she had “lived to see my lost causes found.” And yet she looked in vain for “a truly integrated society,” and she entered the ministry in part because, she realized, “we had reached a point where law could not give us the answers.” In an afterword to her autobiography, a friend, historian Caroline F. Ware, wrote of “the tremendous energy that drove her to achieve excellence in everything she undertook.” The recipient of honorary degrees and other awards, Murray retired in 1984 and died in Pittsburgh, Pennsylvania.

The Pauli Murray Papers are in the Schlesinger Library, Radcliffe College. A lengthy interview she gave Genna Rae McNeil in 1976 is in the Southern Historical Collection, Wilson Library, University of North Carolina, Chapel Hill. The fullest study of Murray’s life is her autobiography. Charles Kuralt televised, on his CBS series “On the Road,” Murray’s first Holy Eucharist, on 13 Feb. 1977, at Chapel Hill, N.C. In an interview (1970) published in Open Secrets: Ninety-four Women in Touch with Our Time, ed. Barbaralee Diamonstein (1972), Murray avows her commitment to civil rights. Obituaries are in the Washington Post and the New York Times, both 4 July 1985, and in Jet, 22 July 1985.