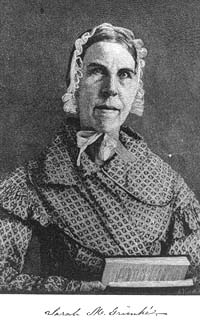 Grimké, Sarah Moore (26 November 1792–23 December 1873), abolitionist, writer-educator, and women's rights pioneer, abolitionist, writer-educator, and women’s rights pioneer, was born in Charleston, South Carolina, the daughter of John Faucheraud Grimké, chief judge of the state supreme court, and Mary Smith. Sarah was educated by private tutors in subjects considered proper for well-bred southern girls—among them, French, watercolors, harpsichord, and embroidery. But from her older brother Thomas, a student at Yale, she learned Latin, Greek, mathematics, and geography. Raised in the upper classes of Charleston, Sarah gained firsthand experience with prosperity’s underside, African slavery. Her father “owned” several hundred slaves, some of whom she taught to read before he (and the law of the state) forbade it.

A major turning point in Sarah’s life came in 1819 when at the age of twenty-six she accompanied her dying father on a trip to Philadelphia. There she mingled with prominent Quakers and confronted their ideas about male-female equality. In 1821 she abandoned her ancestral Anglicanism, became a member of the Society of Friends, left her family, and moved to Philadelphia, where she worked and studied with Quakers. But the honeymoon was brief. Increasingly, Grimké chafed under mainstream Quaker attitudes toward blacks. When Grimké’s youngest sister, Angelina Grimké, joined her in Philadelphia in 1829, they jointly began to protest the Friends’ lukewarm position on slavery and the shabby treatment of blacks in Quaker meetings.

The physically fragile Angelina Grimké was a vital catalyst in Sarah’s evolving religious perfectionism and activism. Twelve years younger than Sarah, Angelina had opposed slavery in Charleston; in 1835 she joined the Philadelphia Female Anti-Slavery Society and published an abolitionist letter in William Lloyd Garrison’s radical abolitionist newspaper, the Liberator. A year later the American Anti-Slavery Society published a pamphlet written by Angelina—arguably, the most important tract published by a female abolitionist before the Civil War—entitled An Appeal to the Christian Women of the South and authorized her to hold women’s abolitionist meetings in New York City. When Quaker leader Jonathan Evans publicly silenced Sarah at the Philadelphia Yearly Meeting of the Society of Friends, Sarah decided to join Angelina in New York City.

Once in New York, the two women zealously pumped energies into the abolitionist cause. In November 1836 they attended a course for abolitionist workers taught by lyceum speaker and reformer Theodore Dwight Weld. Inspired by the experience, Sarah in December of the same year wrote a pamphlet, Epistle to the Clergy of the Southern States. Swiftly published by the American Anti-Slavery Society, it refuted southern arguments of biblical justification for slavery. In early 1837 Sarah and Angelina addressed the Anti-Slavery Convention of American Women, the first major meeting of its kind in the nation, organized by the Grimkés and other women in response to male abolitionists’ exclusion of women from reform society lecterns.

Controversy deepened when the sisters participated in an abolitionist speaking tour of New England; there they addressed “promiscuous” (mixed-sex) audiences of women and men and propelled dozens of listeners into both abolitionism and women’s rights agitation; they also inspired scholars and political oppositionists like Simon Greenleaf of Harvard to take to the road with anti-Grimké speeches. In July 1837 the Council of Congregational Ministers of Massachusetts issued a “pastoral letter” denouncing the sisters for addressing partly male audiences and for questioning male interpretations of the Bible. As they saw it, the sisters’ speeches threatened “the female character with wide spread and permanent injury” by leading women away from their “appropriate duties and influence.” Women who abandoned dependency against the laws of nature and assumed “the place and tone of man as a public reformer” did not deserve the “care and protection” of men. In addition, the Grimkés disregarded taboos about public discussions of rape and women’s bodies and so found themselves accused often of lewdness, mental imbalance, and ungodliness.

After publication of the clerical epistle in the Liberator (1838), and partly in response to repeated attempts to silence her, Sarah became an active speaker and writer for women’s rights and what she termed “the ministry of women.” Her 1838 Letters on the Equality of the Sexes, and the Condition of Woman (addressed to Mary Parker, president of the Boston Anti-Slavery Society) provided a book-length, penetrating examination of “the woman question.” She mounted an argument for an original, divinely ordained equality between men and women; she also described the condition of women in the United States and abroad, examined American laws affecting women, enumerated the inequalities women faced in education, at work, and in parish halls, and explored the cultural roots of gender subjugation. She minced few words, on one occasion asking her “brethren” to “take their feet from off our necks, and permit us to stand upright on that ground which God designed us to occupy.” Not least, she addressed the plight of female slaves, who epitomized patriarchal oppression, and deployed biblical texts in support of woman’s spiritual, political, and economic equality. Referring to “the mistaken notion of the inequality of the sexes,” Grimké called upon her readers “to rise to that degree of dignity, which God designed women to possess in common with men, and to maintain those rights and exercise those privileges which every woman’s common sense … tells her are inalienable.”

For the Grimké sisters, 1838 was a harrowing year. When Angelina married the Presbyterian Theodore Dwight Weld in May 1838, the Society of Friends expelled both sisters. Angelina and other women delivered an antislavery address to a mixed audience in a hall built by reformers in Philadelphia, ironically to encourage free speech; an angry mob threw brickbats through windows and, within a day, torched the hall. Shortly afterward, Angelina and Theodore Weld and Sarah Grimké withdrew from the lecture circuit and settled in Fort Lee, New Jersey. From that base, they circulated antislavery petitions and participated in associated reforms. In 1839 they published American Slavery As It Is: Testimony of a Thousand Witnesses, a compilation of articles on slavery clipped from southern newspapers that served, in turn, as a source for Harriet Beecher Stowe’s explosive Uncle Tom’s Cabin (1852).

In 1840 Grimké and the Welds moved to a farm near Belleville, New Jersey, retiring from antislavery agitation to care for the Welds’ first child (born in 1839) and subsequent offspring. In 1848 the family began taking in boarding students to meet financial obligations; by 1851 they presided over a boarding school with twenty students. From time to time, the sisters contributed (often with letters of support) to the cause of women’s rights, as with their widely quoted 1852 letter to the women’s rights convention in Syracuse, New York.

In 1854 Grimké and the Welds moved to Perth Amboy, New Jersey, and opened a second school, Eagleswood, that operated successfully until 1862. When Theodore Weld decided not to resume a speaking career in 1863, the family relocated briefly to West Newton, Massachusetts, and, a year later, to Fairmount (near Boston), later called Hyde Park.

For Grimké the war years marked a sea-change, away from abolitionism and women’s rights toward education reform and agitation for universal suffrage. Together the sisters taught in Dr. Dioclesian Lewis’s young ladies’ boarding school in Lexington, Massachusetts, until it burned down in 1867. But the struggle to improve black-white relations also continued: in 1868, for instance, Sarah and Angelina welcomed into their homes two mulatto nephews, sons of their brother Henry and an emancipated black woman. The sisters helped Archibald Henry Grimké and Francis James Grimké attend and graduate from Harvard Law School and Princeton Theological Seminary, respectively. In 1868 the Grimké-Weld trio served as officers (with Sarah as a vice president) of the Massachusetts Woman Suffrage Association; two years later Sarah and Angelina led a group of Hyde Park women in unlawful attempts to cast ballots in a local election. On one occasion the 79-year-old Sarah tramped up and down the countryside distributing copies of John Stuart Mill’s Subjection of Women. Her involvement with Massachusetts suffrage crusaders continued until her death in Hyde Park.

Grimké’s contribution to antislavery agitation was pivotal, not only because of her considerable talent as a writer, speaker, teacher, and pamphleteer, but also because of her sex, southern nativity, and uncommon courage. As leaders of the female antislavery movement, Sarah and Angelina regularly risked physical harm and slander. They were the only women to brave social custom and charges of “heresy” in the 1837 speaking tour of New England; with Abigail Kelley, Frances Wright, Maria Stewart, and several others, Sarah made it possible for later generations of women to occupy public spaces without fear (as happened on one occasion) of having to run a gauntlet of jeering men and boys. Sarah’s elegant mapping of similarities (and, occasionally, of differences) between white women in America and African-American slaves—and especially her insistence that white women learn to empathize more completely with black women—elevated her to the first rank of social reformers and Christian-feminist theoreticians. As historian Larry Ceplair put it, Sarah Grimké and her devoted sister were genuine “revolutionaries” in a land not given to revolutionary change, “increasingly conscious that they were blazing a public path for women of courage who had seen a light or heard a voice of truth” (Ceplair, p. xi).

Sarah Grimké’s diary and papers have been preserved in the Weld-Grimké Collection at the Clements Library, University of Michigan, Ann Arbor. The Public Years of Sarah and Angelina Grimké, Selected Writings 1835–1839, ed. Larry Ceplair (1989), reprints many of Sarah’s tracts and contains a chronology of the sisters’ lives. Many of Sarah’s essays have been published in small volumes or anthologized; see, for example, Letters on the Equality of the Sexes and Other Essays, ed. Elizabeth Ann Bartlett (1988), and material reprinted in general collections of documents about the history of women, such as Nancy Cott, ed., Root of Bitterness (1986), and Aileen Kraditor, ed., Up from the Pedestal (1968). Gerda Lerner, The Grimké Sisters from South Carolina: Pioneers for Woman’s Rights and Abolition (1967), remains the best biography of the sisters. Other useful sources include Letters of Theodore Dwight Weld, Angelina Grimké Weld, and Sarah Grimké, 1822–1844, ed. Gilbert Barnes and Dwight Dumond (1934); Catherine Hoffman Birney, The Grimké Sisters: Sarah and Angelina Grimké: The First American Woman Advocates of Abolition and Woman’s Rights (1885); and Theodore Dwight Weld, In Memory: Angelina Grimké Weld (1880), which includes a sketch of Sarah Moore Grimké. On Angelina especially, but also on Sarah Grimké and Theodore Dwight Weld, see Katharine Du Pre Lumpkin, The Emancipation of Angelina Grimké (1974). See also the useful entry in Bartlett, Liberty, Equality, Sorority (1994), on Sarah Grimké’s developing feminism.