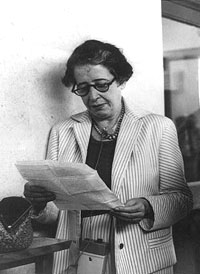 Arendt, Hannah (14 October 1906–04 December 1975), political theorist and philosopher, was born in Hanover, Germany, the daughter of Paul Arendt, an engineer, and Martha Cohn. She was raised in her parents’ hometown, Königsberg, East Prussia, where the family moved when Paul Arendt became seriously ill with syphilis. He died in 1913. The years during World War I were especially difficult for the family; their safety was often threatened by the nearby battles of the Prussian and Russian armies. After the war, Arendt’s mother became a German Social Democrat and a follower of Rosa Luxemburg, whose writings later had a great influence on Arendt’s thought. In 1920 her mother married Martin Beerwald, who provided the family a renewed measure of security and Arendt with two older stepsisters.

A precocious student, Arendt studied philosophy at the University of Marburg, where she met Martin Heidegger, her mentor and, briefly, her lover. She finished her Ph.D. under the supervision of Karl Jaspers at Heidelberg in 1929. Her dissertation was entitled “St. Augustine’s Concept of Love.”

In 1929 Arendt married Gunther Stern, an author whose pen name was Gunther Anders. While living in Berlin with Stern, she wrote a biography of a famous eighteenth-century Jewish salon hostess, Rahel Varnhagen (1957), and affiliated herself informally with the German Zionist Organization. She was doing research for the organization’s president, Kurt Blumenfeld, when she was arrested in 1933 by the Gestapo. After her release, she joined the migration of German Jews and Communists seeking refuge in Paris from Hitler’s totalitarian regime.

Arendt lived in France from 1933 to 1941. During that time she developed a close relationship with the remarkable, autodidactic Berlin Communist Heinrich Blücher. After divorcing Stern, Arendt married Blücher in 1940. While in France, she belonged to a group of fellow émigré antifascist intellectuals—Arendt called them “the tribe”—that included the essayist Walter Benjamin and the novelist Hermann Broch. She worked for Youth Aliyah, an organization that trained young people for life in Palestine, until the German occupation of France resulted in her internment. She and Blücher, also an internee, soon escaped, however, and eventually made their way to the United States.

After arriving in New York in 1941, Arendt learned English and began working in émigré publishing. She wrote articles advocating the creation of a binational Jewish-Arab state in Palestine for the newspaper Aufbau, as well as articles on European history for such journals as Politics, Partisan Review, Review of Politics, and the Nation. As World War II drew to a close, she began to assemble the material for what would become her major treatise, The Origins of Totalitarianism (1951). The book established Arendt’s reputation as a leading political theorist and triggered an intense debate—which persisted throughout the Cold War—about the true nature of totalitarianism.

Arendt’s analyses of anti-Semitism, imperialism, and totalitarianism—the three main sections of Origins—convey a complex and dynamic image: European nation-states declining, supranationalist movements arising, political anti-Semitism becoming the key ideology of the Nazis, and traditional class structures crumbling, replaced by masses of alienated, déclassé proto-totalitarians. While many felt Arendt clearly analyzed Nazism, some critics believed she was less successful in identifying the development of Stalinism, which in Arendt’s view was a horrible new form of one-party dictatorship, or totalitarianism.

The debate that engulfed The Origins of Totalitarianism prompted Arendt to write The Human Condition (1958), a number of important essays later collected in Between Past and Future (1961), and On Revolution (1963). These works examine the history of modern revolutions and, in particular, Marxism and its distortion into Stalinism. Claiming that action and speech are the basic ingredients of political life, Arendt sought to demonstrate how these are distinguished from the focus of Marx’s theories, labor and work. She looked at political affairs in the light of social arrangements and analyzed modern shifts in technological conditions and intellectual habits. Concepts that had been staples of the European political philosophical tradition since Plato—freedom, authority, forms of government, revolution, violence—received her close attention, especially councils. Councils attracted Arendt’s admiration because she believed them to be the essential ingredient of a democratic republic. She therefore attempted to establish a “new science of politics” by envisioning the democratic forms most likely to prevent a reappearance of totalitarianism.

Arendt’s study of Nazi totalitarianism gained a new focus when she attended the trial of the infamous Nazi criminal Adolf Eichmann in Israel in 1961. Her account of that trial—published serially in the New Yorker (1963) and then as Eichmann in Jerusalem: A Report on the Banality of Evil (1964)—aroused tremendous controversy. Critics argued that she mistakenly stressed the role of the European Jewish councils (Judenräte) in the Nazis’ Final Solution; that her portrait of Eichmann as an unthinking, banal human being rather than a sociopathic monster was overly generous; and that her analysis of the inadequacy of Israeli or international laws to address “crimes against humanity” was mistaken. Even though Arendt’s key phrase in describing Eichmann—“the banality of evil”—has passed into common parlance and no longer raises a storm of protest, her underlying theses about the character of evil continue to be debated.

Believing that she had raised more questions than she had answered with her portrait of Eichmann, Arendt set out to explore philosophically his thoughtlessness and banality. From this quest came a posthumously published two-volume work, The Life of the Mind (1977, 1978). While she was again working on philosophy, her “first amour,” she became deeply concerned about the moral and political condition of the United States, her second homeland. She published articles on the assassination of John F. Kennedy, the civil rights movement, the Vietnam War, and the consuming violence that had erupted in the nation’s cities and on college campuses. Her essays, including “On Violence,” are collected in Crises of the Republic (1972).

During the tumultuous 1960s, Arendt depended upon the companionship of her husband Blücher, her old émigré friends from “the tribe,” and a group of new American friends, including the novelist Mary McCarthy. Arendt taught at the University of California–Berkeley and the University of Chicago from 1957 to 1967 and at the New School in New York City after 1968. Blücher’s death in 1970 left her without her “thinking partner,” the person who shared most deeply her passion to understand and explain the twentieth century, of which they had what she liked to call “a pariah’s perspective.” Arendt died in New York City.

Among the important twentieth-century American political theorists, Hannah Arendt probably has had the least effect on public policy, as her work did not translate into the mainstream of either liberal or conservative politics. But her oeuvre stands unequaled as a model of historical range and philosophical depth.

Arendt’s papers are housed in the Library of Congress. The main parts of her German correspondence are in the German Literary Archive, Marbach, Germany. The extensive correspondence with Jaspers, who was a key figure in her intellectual development and a close friend until his death in 1969, was published in German in 1985 and in an English translation in 1992: Hannah Arendt/Karl Jaspers Correspondence, 1926–1969, ed. Lotte Kohler and Hans Saner. Elisabeth Young-Bruehl, Hannah Arendt: For Love of the World (1982), is a detailed biography that includes a complete bibliography. Collections of essays on Arendt’s work are numerous and include an issue of Social Research (1990). See also Margaret Canovan’s major study, Hannah Arendt: A Reinterpretation of Her Political Thought (1992).