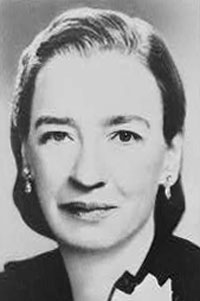 Hopper, Grace Brewster Murray (09 December 1906–01 January 1992), naval officer and pioneer developer of computer languages, was born in New York City, the daughter of Walter Fletcher Murray and Mary Campbell Van Horne. Her grandfathers were important in shaping her future—one was a navy admiral, and the other an engineer with New York City. After attending Hardridge School in Plainfield, New Jersey, she graduated in 1928 with election to Phi Beta Kappa from Vassar College, with a degree in mathematics and physics. She completed a mathematics M.A. in 1930 at Yale and earned a Ph.D. in mathematics and mathematical physics, also from Yale, in 1934.

Grace married Vincent Foster Hopper in 1930; they had no children and were divorced in 1945. She taught at Vassar from 1931 to 1941, rising from instructor to associate professor. After a Vassar faculty fellowship at the Courant Institute of New York University in 1942, and teaching at Barnard College in 1943, she joined the war effort by signing up with the U.S. Naval Reserve in December 1943.

Commissioned as a lieutenant (junior grade) in June 1944, Hopper was assigned to a Harvard University project creating mathematical tables for the navy’s Bureau of Ordnance. Her duties included working with Howard Aiken’s electro-mechanical Mark I computer project, funded jointly by IBM and the navy. She edited the 500-page Manual of Operation for this first American programmable computer, which could develop mathematical tables far faster than “human computers”.

Fully engaged in her computer research, Hopper declined Vassar’s postwar offer to return as a mathematics professor. When the navy turned down her 1946 request for a regular commission (at forty, she was two years too old), she reverted to inactive reserve status. Becoming a research fellow in engineering sciences and applied physics at Harvard, she helped to complete the larger and faster Mark II and Mark III computers, supported by continuing navy contracts with the university. She is often credited with creating the term “computer bug” around this time: in mid-1947 she and others found a dead moth causing a relay to malfunction in the Mark II computer and recorded the event in their log of experiments. Hopper became interested in potential business applications of the computer and helped Prudential Insurance use the Mark I to refine its actuarial tables.

During the late 1940s Hopper also taught mathematics at Harvard part-time, but she did not stay beyond three years because Harvard limited tenured positions to full-time faculty. After entertaining several offers of employment, she sought to further her research interest in computer programming. In 1949 she became a senior mathematician with the Eckert-Mauchly Computer Corporation in Philadelphia, newly formed by the creators of the all-electronic ENIAC computer, which had been developed under army contracts during the war. She stayed on as a senior computer programmer when the company was taken over by Remington Rand a year later.

Hopper served as head programmer for Remington Rand’s pioneering UNIVAC I (Universal Automatic Computer) series of computers, forty-six of which were sold between 1951 and 1957. She became director of programming for what became the UNIVAC division of Sperry-Rand after 1955. At UNIVAC Hopper managed a programming team that produced the first computer language “compiler” in 1952. Dubbed the A-0 (later the A-2), it allowed translation of computer programming language into machine-readable binary code instructions. This led in turn to later machine-readable programming languages, including Math-Matic and B-0 or Flow-Matic (1957), which was described as the first computer language in English, using words rather than symbols and numbers. Flow-Matic, in turn, strongly influenced the development (by others) in the late 1950s of Common Business-Oriented Language (COBOL), a word-based computer language developed in response to the scientific community’s more complex, mathematical FORTRAN computer language. Hopper was instrumental in developing compilers for COBOL in the early 1960s. For another two decades, COBOL was the most widely used programming language in the United States, in part because of its relative ease of learning and use.

Throughout this period Hopper had remained in the navy reserve, becoming a lieutenant commander in 1946 and commander in 1952, and reluctantly retiring at the latter rank in 1966 because of age. Just seven months later, the navy recalled her to active service—she was then sixty—to work on standardizing their myriad computer programming languages. She remained for nineteen more years, dubbed “Amazing Grace” by her subordinates, and worked diligently to promote standardized computer program languages in both government and business. Thanks to annual extensions voted by Congress, Hopper became a captain in 1973, commodore in 1983 (in a White House ceremony), and finally retired in August 1986 as a rear admiral at age seventy-nine, the oldest serving officer. She loved to recall the airport agent who, on seeing her in officer’s uniform, remarked, “You must be the oldest one they’ve got.”

In September 1986 Hopper reported to Digital Equipment Corporation to work in their public relations department as a senior consultant. She worked actively until a year and a half before her death in Arlington, Virginia. She was buried with full military honors at Arlington National Cemetery.

An accomplished public speaker who gave two hundred or more talks a year, Hopper encouraged young people to enter the expanding computer field. She always told them to experiment—it was far easier to apologize later than to obtain advance permission to try something innovative. She kept a ship’s clock in her office that read time backward, to suggest that tradition was not a sufficient reason to do things the same way. Her straightforward, often outspoken approach, her willingness to poke fun at herself as well as others, and her dedication to the quest for computer program standardization in business and government made her an important spokesperson for more widespread application of computers. In the 1950s she predicted that computer software costs would eventually exceed those of hardware and that computers would shrink from room size to desktop units; she lived to see both predictions become fact.