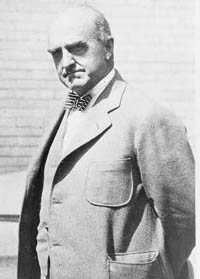 Jaggar, Thomas Augustus, Jr. (24 January 1871–17 January 1953), geologist and volcanologist, was born in Philadelphia, Pennsylvania, the son of Thomas Augustus Jaggar, a bishop of the Protestant Episcopal church, and Anita Louisa Lawrence. From an early age Jaggar participated in hiking and other outdoor activities, an interest he learned from his father. They took hiking trips to the backwoods of Maine and eastern Canada, and a trip to Europe in 1875 spurred Jaggar’s commitment to the earth sciences when it included a climb of Mt. Vesuvius. He graduated from Harvard University with a B.A. in 1893 and an M.A. in 1894, both in geology. For nearly two years he studied mineralogy and petrography at the Universities of Munich and Heidelberg in Germany and then returned to Harvard, where he obtained his Ph.D. in geology in 1897.

In 1895, while still a graduate student, Jaggar was appointed instructor in geology at Harvard University and in 1903 was promoted to assistant professor. During the summers he was also a member of the United States Geological Survey, working in the Black Hills of South Dakota, Yellowstone National Park, Wyoming, and in Arizona. This work resulted in his first major publication, The Laccoliths of the Black Hills (1901).

Even then Jaggar was most interested in dynamic geologic processes, and he set about applying experimental laboratory methods of physics and chemistry to geology. Several of his early publications reflect this interest. However, he quickly became much more interested in applying these methods to measuring and analyzing dynamic geologic processes in operation under actual field conditions. Two of the most dynamic phenomena of geology are earthquakes and volcanoes, and to Jaggar their study was irresistible. He first realized this ambition when in 1902 he was one of the scientists sent by the U.S. government to the Antilles to investigate the catastrophic volcanic eruptions of Soufriere and Mount Pelee, which killed some 30,000 persons. This expedition strongly influenced Jaggar to pursue the field study of active volcanoes and earthquakes with a strong emphasis on the effects of both on human beings. Shortly after returning to Harvard, on 15 April 1903, Jaggar married Helen Kline. This union did not last, however; after two children were born, the marriage ended in divorce, apparently when Helen Jaggar refused to leave Boston and move with her husband to the Hawaiian Islands.

In 1906 Jaggar, already a much-published and highly respected geologist, writer, and lecturer, became head of the geology department at the Massachusetts Institute of Technology (MIT). Over the next several years he undertook a series of expeditions to study active volcanoes and earthquakes in Italy, Japan, the Aleutians, Hawaii, and Central America. As a result of these investigations, Jaggar became increasingly disturbed over how little scientists of his day knew about volcanism and earthquakes and other earth processes that bring about great natural disasters and how little effort was being expended to learn more. Only at the Vesuvius Observatory in Italy and a few small stations in Japan were actual field observations of these phenomena being undertaken. He believed the time had come to direct more studies toward the prediction of volcanic eruptions and earthquakes and the development of engineering techniques and types of construction to lessen their disastrous consequences. He was convinced also that the traditional method of making brief expeditions to affected areas was inadequate and that permanent observatories needed to operate in areas of recurring volcanic and seismic activity.

Jaggar’s dream of establishing a permanent volcanological monitoring station was realized in July 1909 when the Whitney Estate gave $25,000 to MIT for geophysical research that would aid in the protection of human lives and property. At Jaggar’s urging these funds were applied to the establishment of an observatory at the summit of Kilauea volcano in Hawaii. Kilauea was chosen because of the constancy and moderation of its volcanic activity, which allowed investigators to work with active lava at close range. Thus Jaggar embarked on his true life’s work—the development and operation of the Hawaiian Volcano Observatory (HVO), formally established in 1911. Much to his disappointment, however, Jaggar was unable to participate in the first project conducted at the new Hawaiian observatory, as he was not allowed to take leave from his teaching duties at MIT until the following year. Instead, during the summer of 1911 E. S. Shepard, a chemist from the Geophysical Laboratory of the Carnegie Institute of Washington, and F. A. Perrett, a volcanologist from the Volcanic Research Society of Springfield, Massachusetts, conducted the initial scientific work at HVO by making temperature measurements in the Halemaumau lava lake at Kilauea summit.

In the spring of 1912 Jaggar left MIT and moved to Hawaii as the first director of the HVO. Funds from the Whitney Estate were augmented by the enthusiastic financial support of the people of Hawaii who, led by Jaggar and Lorrin A. Thurston, editor of the Honolulu Advertiser, then the principal Honolulu newspaper, formed the Hawaiian Volcano Research Association, which provided an additional $5,000 a year to operate the HVO. In addition, the people of Hilo contributed the money for construction of the first HVO building. During his early years in Hawaii, Jaggar met Isabel Maydwell, a co-worker and lifelong colleague who shared his love for geology and the study of active volcanoes; they were married in 1917.

Jaggar’s initial years at HVO were scientifically exhilarating as he established fundamental techniques and pioneered many new monitoring instruments. From the beginning, however, finances were inadequate. At times, Jaggar served wholly without a regular salary, and once he had to partially finance the observatory’s operations with money he made raising pigs. Perhaps one of Jaggar’s greatest contributions was his determination and singleness of purpose, which allowed him, even in the most discouraging of times, to somehow keep the program going. Financial stability was finally assured in 1919, when the U.S. government took over fiscal responsibility for the HVO, first putting it under the auspices of the Weather Bureau and then, in 1924, assigning it to the U.S. Geological Survey. In 1926 the Geological Survey established a Section of Volcanology, and Jaggar was named as its first chief.

Under Jaggar’s direction, work at the observatory was extremely diverse. In addition to routine seismic observations and the continuous monitoring of volcanic activity of Kilauea and Mauna Loa, HVO scientists recorded the levels, temperature, depth, and viscosity of the molten lava lake in Halemaumau, collected and analyzed volcanic gases, performed detailed studies of Kilauea’s crater floor, studied the different types of lavas and how they formed, and conducted petrologic studies of the rocks as well as a special study of tsunamis, the destructive ocean waves that sometimes are generated by submarine earthquakes. 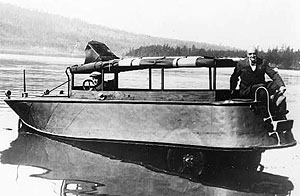 Right, aboard his amphibious automobile, used to explore the Aleutian volcanic chain, 1928.

After establishing the HVO, Jaggar continued to study volcanoes and earthquakes, visiting more than sixty of the world’s approximately 450 active volcanoes. In 1927–1928 he headed an expedition organized by the National Geographic Society to study Aleutian volcanoes. To facilitate exploring inaccessible Aleutian beaches he invented an amphibious vehicle that was later developed for use as a landing craft in World War II. For this, in 1945, he was awarded the National Geographic Society’s Franklin L. Burr Prize.

Jaggar believed that the wonders of the great Hawaiian volcanoes should belong to the American people, and from his first days in Hawaii he strongly advocated the creation of a national park to include Kilauea and Mauna Loa. His vision was realized in 1916 with the establishment of the Hawaii Volcanoes National Park. In 1935 the operation of HVO was temporarily transferred to the National Park Service, and from then until his retirement in 1940, Jaggar worked for the national park he had helped to establish. After his retirement he became a research associate in geophysics at the University of Hawaii, a position he retained until his death in Honolulu.

Many of Jaggar’s methods and techniques for studying active volcanoes have become standard the world over. In addition to his contributions to volcanology, he will be long remembered for his efforts to protect humanity and its property from lava flows. He was the first to use aerial bombing in an attempt to deflect or stop a lava flow, and he developed detailed plans for the use of barriers to deflect flows away from the city of Hilo. In January 1987 the Thomas A. Jaggar Museum, situated on Kilauea’s summit overlooking Halemaumau Crater, adjacent to the Hawaiian Volcano Observatory, was dedicated in his honor.

The most complete collection of Jaggar’s published works is in the Thomas A. Jaggar Collection at Sinclair Library, the University of Hawaii at Manoa. Jaggar was a prolific writer. His most important works include the Hawaiian Volcano Observatory Bulletin, vols. 1–15 (1912–1927), and the Volcano Letter, nos. 1–469 (1925–1940), the first systematic publications of a volcanic observatory; Origin and Development of Craters (1947); Steam Blast Volcanic Eruptions (1949); and the autobiographical My Experiments with Volcanoes (1956). For additional information see G. A. Macdonald and Thomas August Jaggar, Volcano Letter no. 519 (1953); G. A. Macdonald, Volcanoes (1972); F. M. Bullard, Volcanoes, in History, in Theory, in Eruption (1962); and Volcanism in Hawaii, vol. 2, U.S. Geological Survey Professional Paper 1350 (1987).