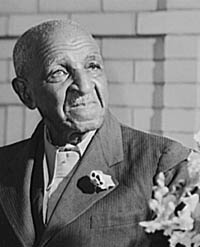 Carver, George Washington (1864–05 January 1943), African-American scientist and educator, was born in Diamond (formerly Diamond Grove), Missouri, the son of Mary Carver, who was the slave of Moses and Susan Carver. His father was said to have been a slave on a neighboring farm who was accidently killed before Carver’s birth. His mother was apparently kidnapped by slave raiders while he was very young, and he and his older brother were raised by the Carvers on their small farm.

Barred from the local school because of his color, Carver was sent to nearby Neosho in the mid-1870s to enter school. Having been privately tutored earlier, he soon learned that his teacher knew little more than he did, so he caught a ride with a family moving to Fort Scott, Kansas. Until 1890 Carver roamed around Kansas, Missouri, and Iowa seeking an education while supporting himself doing laundry, cooking, and homesteading.

In 1890 Carver entered Simpson College in Indianola, Iowa, as a preparatory student and art major. Convinced by his teacher that there was little future in art for a black man, he transferred the next year to Iowa State, where he was again the only African-American student. By the time he received his masters degree in agriculture in 1896, Carver had won the respect and love of both faculty and students. He participated in many campus activities while compiling an impressive academic record. He was employed as a botany assistant and put in charge of the greenhouse. He also taught freshmen.

The faculty regarded Carver as outstanding in mycology (the study of fungi) and in cross-fertilization. Had he not felt obligated to share his knowledge with other African Americans, he probably would have remained at Iowa State and made significant contributions in one or both of those fields. Aware of deteriorating race relations in the year of Plessy v. Ferguson, he instead accepted Booker T. Washington’s offer in 1896 to head the agricultural department at Tuskegee Normal and Industrial Institute in Macon County, Alabama. Carver brought both his knowledge and professional contacts to Tuskegee. Two of his former teachers, James Wilson (1836–1920) and Henry C. Wallace, became U.S. secretaries of agriculture, as did Wallace’s son, Henry A. Wallace. All three granted Department of Agriculture aid to Tuskegee and provided access to such presidents as Theodore Roosevelt and Franklin D. Roosevelt.

Carver’s strong will led to conflicts with the equally strong-willed Washington over Carver’s incompetence at administration. His contacts and flair for teaching and research protected Carver from dismissal. In both his teaching and his research his primary goal was to alleviate the crushing cycle of debt and poverty suffered by many black farmers who were trapped in sharecropping and cotton dependency. As director of the only all-black agricultural experiment station, he practiced what was later called “appropriate technology,” seeking to exploit available and renewable resources. In the classroom, in such outreach programs as farmers’ institutes and a wagon equipped as a mobile school, and in agricultural bulletins Carver taught how to improve soil fertility without commercial fertilizer, how to make paints from native clays, and how to grow crops that would replace purchased commodities. He especially advocated peanuts as an inexpensive source of protein and published several bulletins containing peanut recipes.

In 1905 Carver considered marrying, but he never did. Tuskegee students became his “adopted family.” He was mentor to many, providing financial aid and personal guidance. Devoutly religious in a nonsectarian way, he also taught a voluntary Bible class on campus.

At the time of Booker T. Washington’s death in 1915, Carver was respected by agricultural researchers but largely unknown to the general public. Long in the shadow of Washington, Carver became the heir to the principal’s fame after being praised by Theodore Roosevelt at the funeral. In 1916 he was inducted into the Royal Society for the Arts in London. Then the peanut industry recognized his usefulness. In 1921 a growers’ association paid his way to Washington so that he could testify at congressional tariff hearings, where his showmanship in displaying peanut products garnered national publicity. In 1923 Atlanta businessmen founded the Carver Products Company, and Carver won the Spingarn Medal of the National Association for the Advancement of Colored People. The company failed but obtained one patent and much publicity. In 1933 an Associated Press release overstated Carver’s success in helping polio patients with peanut oil massages. Carver became one of the best-known African Americans of his era.

His rise from slavery and some personal eccentricities—such as wearing an old coat with a flower in the lapel and wandering the woods at dawn to commune with his “Creator”—appealed to a wide public. Advocates of racial equality, the “New South,” a religious approach to science, the “American Dream,” and even segregation appropriated Carver as a symbol of their varied causes. Carver made some quiet, personal stands against segregation, but he never made public statements on any racial or political issues. Thus his name could be used for contradictory goals. He relished the publicity and did little to correct the exaggerations of his work, aside from humble protestations regarding his “unworthiness” of the honors that came in increasing numbers.

Though some of this mythology was unfortunate, Carver served as a role model to African Americans and as a potent force promoting racial tolerance among young whites. The Commission on Interracial Cooperation and the Young Men’s Christian Association sent him on lecture tours of white campuses in the 1920s and 1930s. On these occasions Carver adopted some white “children” into his “family” and converted dozens to the cause of racial justice. To them Carver was no “token black” but a personal friend and confidant. Indeed, many people who met Carver, Henry Ford among them, were made to feel they were “special friends.”

Carver never earned more than $1,200 a year and refused compensation from peanut producers. Nevertheless he was able to accumulate almost $60,000 because he lived in a student dormitory and spent very little money. In 1940 he used his savings to establish the George Washington Carver Foundation to support scientific research—a legacy that continues at Tuskegee University. He died three years later in Tuskegee. Although his scientific contributions were meager relative to his fame, Carver’s work did help hundreds of landless farmers improve the quality of their lives. And his magnetic personality and capacity for friendship inspired and enriched countless individuals.