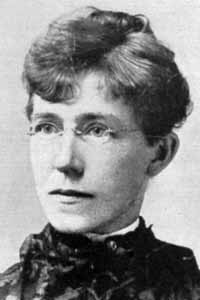 Courtesy of the National Library of Medicine (B04751).

Cleaves, Margaret Abigail (25 November 1848–13 November 1917), physician, was born in Columbus City, Iowa, the daughter of John Trow Cleaves, a and Elizabeth Stronach. As a child, Margaret often accompanied her father on his rounds. She attended the University of Iowa in Iowa City but was unable to complete her baccalaureate degree for financial reasons. Alternately, she taught school and attended classes until she began reading medicine and entered the medical department of the University of Iowa in 1870. She received her medical degree in 1873, graduating at the head of her class.

From 1873 to 1876, Cleaves, one of the first women to serve on the medical staff of an insane asylum, was an assistant physician at the Iowa state hospital in Mount Pleasant. In 1876 she moved to Davenport, Iowa, to set up a private practice in general medicine. She pursued her interest in the plight of the insane by serving as a trustee of the state hospital and in the condition of other dependent peoples by becoming actively involved in the National Conference of Charities and Corrections. Her paper at the 1879 national meeting of the conference, entitled “The Medical and Moral Care of Female Patients in Hospitals for the Insane,” was well received.

In 1880 Cleaves’s growing professional reputation brought her an opportunity to become one of the first women doctors to manage the care of mentally ill female patients. Pennsylvania had passed legislation intended to require women doctors on the staffs of all public institutions with women patients. Although the legislation ultimately encouraged rather than required women doctors, the trustees of the state hospitals in Norristown and Harrisburg decided to place women doctors in charge of the care of women patients. The Harrisburg trustees recruited Cleaves as physician in chief of the hospital’s Female Department, and in August 1880 she set out to test her theories about insanity in women.

Cleaves had entered the professional debate about the cause of mental illness in women on the side of those who believed that insanity in women was directly related to the female reproductive system. Cleaves instituted regular gynecological examinations and treatment at the Harrisburg asylum. She quickly observed that local treatment brought only limited, and probably coincidental, relief, and the evidence led her to reject the idea that utero-ovarian disease was related to insanity. More compelling in the lives of the majority of working-class patients she treated, Cleaves thought, was the “endless monotony” of their lives, their “never ceasing routine of work,” and their “too frequent child bearing” (Harrisburg State Lunatic Hospital, Annual Reports [1880–1883]).

Unable to change the lives of her patients and debilitated by her own health problems, Cleaves resigned in 1883, traveled in Europe for two years, and then returned to Des Moines, Iowa, where she opened a practice. During the next five years, she operated a private retreat for women patients with nervous afflictions and actively participated in county and state medical societies. Her continuing devotion to civic concerns and women’s issues led her to organize the Des Moines Women’s Club, becoming its first president in 1885. She became increasingly interested in the use of electricity in medicine, delivering a paper to the Polk County Medical Society on the treatment of uterine fibers by electrolysis in 1888.

In 1890 Cleaves moved to New York City, where for the next twenty-five years she operated the New York Electro-Therapeutic Clinic Laboratory and Dispensary on Madison Avenue. She remained an active member of the American Medical Association and the local and county medical societies in New York City as well as the more short-lived electrotherapeutic groups. She was a contributor to the Journal of Nervous and Mental Disease in the 1890s and served on the editorial staff of the Women’s Medical Journal in 1909. In 1904 she published her professional magnum opus, Light Energy: Its Physics, Physiological Action, and Therapeutic Applications, and in 1910 her personal saga, The Autobiography of a Neurasthene, As Told by One of Them and Recorded by Margaret A. Cleaves, M.D. In the late nineteenth and early twentieth centuries, neurasthenia had become the medical label for a syndrome whose causes doctors could not clearly identify. Symptoms attributed to neurasthenia included a limited capacity to deal with stress and an oversensitized nervous system; thus, women were diagnosed as neurasthenics more often than men. Cleaves believed that she suffered from the illness, and, indeed, her autobiography is an account of her lifelong struggle with the affliction.

Margaret Cleaves was part of that pioneering generation of women who broke the barriers of gender in the medical profession. When she joined medical societies, she was always either the first or second woman to gain membership. She encouraged other women to confront the established mores of professional organizations, and she never stopped challenging traditional modes of treatment in psychiatry and neurology. She died in a Mobile, Alabama, hospital and was buried in Davenport, Iowa.

There is no manuscript collection for Cleaves. The biographical sketch in Frances Willard and Mary Livermore, A Woman of the Century (1893), offers considerable detail. Constance M. McGovern, “Doctors or Ladies?: Women Physicians in Psychiatric Institutions, 1872–1900,” Bulletin of the History of Medicine 55 (1981): 88–107, and F. G. Gosling, Before Freud: Neurasthenia and the American Medical Community, 1870–1910 (1987), provide helpful medical and social background. A death notice is in the New York Times, 15 Nov. 1917.