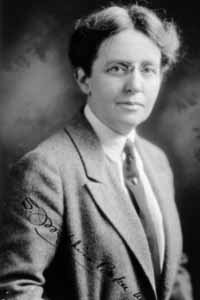 Courtesy of the National Library of Medicine (B02220).

Baker, Sara Josephine (15 November 1873–22 February 1945), physician and public health administrator, was born in Poughkeepsie, New York, the daughter of Orlando Daniel Mosher Baker, an eminent lawyer, and Jenny Harwood Brown, one of the first Vassar College graduates. In her autobiography Baker described her father, who came from Quaker stock, as a sober, quiet man who “never uttered an unnecessary word,” while her mother, “gay, social and ambitious,” traced her ancestry back to Samuel Danforth, one of the founders of Harvard College. A happy child, Baker drew inspiration from both parents. Wishing to make it up to her father for not being born a boy, she became an enthusiastic baseball player and trout-fisher and read Horatio Alger stories with zest. But, as Baker wrote in her autobiography, she was also “thoroughly trained in the business of being a woman,” received rigorous instruction in cooking and sewing, and cherished “Jo” from Louisa May Alcott’s Little Women as a favorite fictional character. Though her family had intended that Baker attend Vassar, the sudden deaths of her younger brother and her father when she was sixteen drastically altered her financial prospects. Because of the delicate health of her older sister, Baker alone took on the burden of family finances. After months of painful decision making, she resolved to give up the offer of a scholarship to Vassar and use the remaining savings to attend medical school. Overcoming her mother’s initial aversion to a medical career, Baker attributed a good portion of her determination to the hardened opposition of other relatives. She always relished the defiance of convention, and the stubbornness and conviction that she manifested at this time stayed with her throughout her life.

After a year of preparatory course work in general subjects, Baker enrolled in the Women’s Medical College of the New York Infirmary in 1894. Founded in 1868 by Elizabeth Blackwell and Emily Blackwell, this institution had an excellent reputation and was the only regular medical school open to women in the state. It offered Baker vigorous medical training and the rare opportunity to work with outstanding female role models, such as physicians Mary Putnam Jacobi, Annie Sturges Daniel, Martha Wollstein and Emily Blackwell. Exposure to networks of successful female professionals proved crucial to Baker’s development and continued after graduation in 1898, when she spent a year as intern in Boston at the female-run New England Hospital for Women and Children. Working in an out-patient clinic in the midst of Boston’s worst slums, Baker encountered firsthand the subject of her future life’s work: the problems of poverty and ill health among the poor. She was unsentimental about her clients (“we were dealing with the dregs of Boston, ignorant, shiftless, settled irrevocably into surly degradation”) but also perceptive about the structural sources of social injustice.

Warned that it would take five years to become established, Baker nevertheless opened a private practice in New York City with fellow intern and friend Dr. Florence Laighton in 1899. When they earned only $185 in the first year, the women pressured the New York Life Insurance Company to hire them as medical examiners, which paved the way for women physicians in insurance work. In addition, Baker took a part-time position as a medical inspector for the city at a salary of $30 a month. This exposure to a group of remarkable public health officials like Drs. Walter Bensel and Herman M. Biggs drew her into the field of public health, and by 1914 she had given up her private practice entirely. In 1907 she became assistant to the commissioner of health and handled a range of problems from vaccinating against small pox to sanitation to apprehending and managing Typhoid Mary Mallon, a notorious asymptomatic carrier of the disease who, as a cook, had infected numerous people. Eventually, her interests centered on infant and child health, and in 1908 she was appointed director of the Bureau of Child Hygiene under the city health department, the first bureau of its kind in the United States, and one that her efforts had helped to create.

As bureau director, Baker made many outstanding contributions to preventive medicine and social policy. Indeed, she became perhaps the most prominent member of a cohort of women physicians who, in the first third of the twentieth century, made their mark in social medicine. One of her first accomplishments was to develop legislation, regulation, and training opportunities to control city midwives. Her efforts resulted in a significant reduction in maternal mortality and infant gonorrheal blindness. By sending school inspection nurses into slum homes to teach recent immigrants about ventilation and proper cleanliness, she brought down the incidence of infant mortality from summer diarrhea. Baker’s baby health stations, which were imitative of European models, distributed pure milk, and her Little Mothers’ Leagues trained preadolescent slum girls to care for younger siblings while their mothers worked. Her innovative school health program involved doctors and nurses in monitoring student health from kindergarten through adolescence and inspired similar programs in thirty-five states. By the time of her retirement in 1923, New York City had the lowest infant mortality rate of any of the major cities in America or Europe.

Baker was something of a maverick whose efforts often ran counter to a medical profession that was increasingly nervous about government incursion on fee-for-service practice. As the public health field became dominated by physician-scientists who gradually abandoned the costly and politically sensitive program of environmental reform for the more dramatic and immediate rewards of the laboratory, Baker kept her attention trained on the social context of disease. She was a consummate politician who devoted much thought to accomplishing her goals without appearing too politically radical. Her emphasis on the plight of mothers and children always muted the opposition. Increasingly recognized as a leading international authority on public health, in 1917 she became the first woman to receive a doctorate in public health from the New York University–Bellevue Hospital Medical School and lectured there annually thereafter on child hygiene. She published five books, Healthy Babies (1920), Healthy Mothers (1920), Healthy Children (1920), The Growing Child (1923), and Child Hygiene (1925), and contributed fifty articles to medical journals and over 200 to the popular press on the subject of preventive medicine. She served from 1922 to 1924 as a member of the Health Committee of the League of Nations and as a child hygiene consultant to the Children’s Bureau of the U.S. Department of Labor, the U.S. Public Health Service, and the New York State Department of Health. In 1917 she assumed the presidency of the American Child Hygiene Association, which she had founded in 1909, and was an active member of numerous medical societies and social welfare organizations until her death.

Baker was a feminist with ties to a network of independent and unconventional women who organized themselves into a discussion group known as the Heterodoxy Club in 1912. Members included Crystal Eastman, Mabel Dodge Luhan, Rose Pastor Stokes and Henrietta Rodman. A lesbian who believed that playing down her femininity would enable her to accomplish more professionally, Baker dressed in suits and neckties and was known among the Heterodoxy Club members as “Dr. Joe.” She was an active suffragist and presided over the American Medical Women’s Association in 1935.

A towering figure in the field of public health in the first half of the twentieth century, Baker retired during the last years of her life to her farm at Bellemead, New Jersey, where she lived with her partner, the novelist and writer Ida Wylie, and the physician Louise Pearce. She died in New York City.

There is no biography, but Baker’s witty autobiography, Fighting for Life (1939), is a helpful source. See also Noah D. Fabricant, ed., Why We Became Doctors (1954), pp. 129–31, for a short sketch. For her professional activities, see [unsigned], “Dr. S. Josephine Baker,” Medical Women’s Journal (July 1935): 199; Alice Stone Woolley, “Tributes to Dr. S. Josephine Baker,” Women in Medicine (July 1946): 24–26; and a feature story on Dr. Baker in the New York World-Telegram, 21 Jan. 1942. Especially informative is Leona Baumgartner’s biography in Notable American Women (1971). For Baker’s relationship with the Heterodoxy Club and more on her lesbianism, see Judith Schwarz, Radical Feminists of Heterodoxy (1986). Francis Kobrin provides context for Baker’s accomplishments regarding midwives in “The American Midwife Controversy: A Crisis of Professionalization,” Bulletin of the History of Medicine (1966): 350–63. See chapter 10 of Regina Morantz-Sanchez, Sympathy and Science: Women Physicians in American Medicine (1985), for her work in public health. An obituary is in the Journal of the American Medical Association, 17 Mar. 1945.