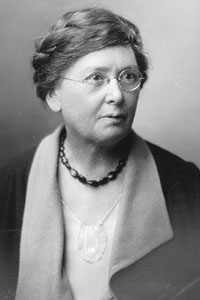 Pound, Louise (30 June 1872–28 June 1958), folklorist, was born in Lincoln, Nebraska, the daughter of Stephen Bosworth Pound, an attorney, state senator, and district court judge, and Laura Biddlecombe, a former schoolteacher who studied German language and literature at the University of Nebraska and was also an avid botanist. Educated at home by her mother until 1886, Pound took undergraduate (1892) and master’s (1895) degrees at the University of Nebraska, where she coedited the literary magazine with Willa Cather and also distinguished herself as an athlete. She was a renowned cyclist and golfer (the 1916 Nebraska champion), played on and later coached the women’s basketball team, and defeated opponents of both genders to win the University of Nebraska tennis championship in 1891 and 1892.

Pound lived the rest of her life with her sister Olivia in the Victorian house near the state capitol that had been their childhood home. She taught five courses each semester for a half-century and produced a large body of scholarship devoted to subjects ranging from Old English, Middle English, and American literature to folklore, linguistics, and regional studies. She claimed to value most of all her accomplishments as a teacher, noting with special pride that several scholarly books had been dedicated to her. But it was her scholarship, especially in balladry and American language studies, that brought her national and even international fame. During the 1920s and 1930s she served as visiting professor during summer sessions at the Universities of California (1923), Yale (1928), Chicago (1929), Columbia (1930), and Stanford (1931).

Pound’s scholarly work had a triple focus from the beginning—in literature, language, and folklore. By 1915 she had already published studies devoted to Arnold, Tennyson, and Ralph Waldo Emerson in the first area, articles on British and American pronunciation and Nebraska dialect in the second, and studies of cowboy songs and English ballads in the third.

Pound first achieved national recognition for her studies of American and Nebraska speech. In 1925 she was one of the founders of American Speech, which she edited until 1933, and she also served the American Dialect Society as vice president (1927–1937) and president (1938–1944). In 1936 the fourth edition of H. L. Mencken’s The American Language offered a summary of her work: “Of the few American scholars who took the national language seriously,” Mencken wrote, “the work of Louise Pound, of Nebraska, was especially productive” for its investigation of “the general speechways of the country. Her first contribution to Dialect Notes was published in 1905; thereafter, for twenty years, she or her pupils were represented in almost every issue.”

Pound’s contributions to folklore studies were no less numerous and certainly no less significant. She was president of the American Folklore Society from 1925–1927 and served as advisory editor of the Southern Folklore Quarterly (1939–1958) and Folk-Say (1929–1930). Folk Song of Nebraska and the Central West: A Syllabus, published in 1915, was an early product of an abiding interest in balladry and poetic origins that led her into battle in 1921 with the dominant wisdom of the day and its highly placed academic proponents in her book Poetic Origins and the Ballad. Pound maintained that ballads were not in all cases associated with dance, as other scholars believed, and that they were characteristically the work of individual composers, not “communal” compositions. Poetic Origins and the Ballad was an openly controversial book, described later as “Louise Pound at her feistiest taking on men who were regarded as giants in the field” (Haller in McCleery, p. 45). Pound opened with a brief description of “the accepted view of primitive song” and then moved immediately to demolish that view: “That it is an absurd chronology which assumes that individuals have choral utterance before they are lyrically articulate as individuals, seems—extraordinarily enough—to have little weight with theorists of this school.” The communal theory’s prominent defenders—George Lyman Kittredge, Francis Barton Gummere, Gordon Hall Gerould—were at first disdainful, with Gerould complaining in print in 1921 that Pound was “obviously incapable of orderly thought” (Literary Review, 5 Mar. 1921, p. 6). By the late 1930s, however, the communalists were in retreat, with Pound continuing to press her attacks into the 1950s.

Pound’s lifelong work in Nebraska folkways was not published in one volume until after her death (Nebraska Folklore, 1959), but the earlier Selected Writings of Louise Pound, issued in 1949, contains a broad sampling of her literary criticism, language studies, and work in folklore. It also includes several pieces devoted to educational subjects, especially the teaching of English and the promotion of opportunities for women in graduate schools and in research positions.

Pound was for many years an active member of the American Association of University Women, and she was a charter member of the American Association of University Professors, where she served on the national council from 1929 to 1932. Pound and her sister have also been remembered for encouraging and assisting the artistic and scholarly aspirations of many younger women in Nebraska. She was a frequent speaker to women’s groups in various Nebraska towns, and worked throughout her long career in support of improved opportunities for women at the University of Nebraska. In 1955 Pound was the first woman elected president of the Modern Language Association, and in the same year she was the first woman inducted into the Nebraska Sports Hall of Fame. She died in Lincoln, Nebraska.

The major collection of Pound’s papers is held by the Nebraska State Historical Society. Additional materials are in the Special Collections Division of the Love Library at the University of Nebraska in Lincoln. There is as yet no full biographical study. A thorough bibliography, compiled by Mamie Meredith and Ruth Odell, is included in Selected Writings of Louise Pound, pp. 349–61. Brief biographical sketches include the entry by Evelyn Haller in Notable American Women: The Modern Period, ed. Barbara Sicherman and Carol Hurd Green (1980), pp. 557–59, and Elizabeth A. Turner, “Legacy Profile: Louise Pound,” Legacy 9 (1992): 59–64. Haller also contributed an essay on Pound to Resource Guide to Six Nebraska Authors, ed. David McCleery (1992), pp. 40–47. Obituaries are in Western Folklore 18 (July 1959), and Southern Folklore Quarterly 23 (July 1959).