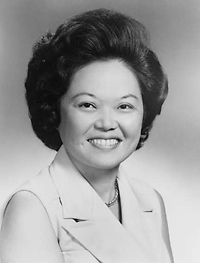 Courtesy of the Library of Congress, Congressional Portraits Collection (LC-USZ62-122137).

Mink, Patsy (06 December 1927–28 September 2002), U.S. congresswoman, was born Patsy Matsu Takemoto in Paia, Maui, Hawaii, the daughter of Suematsu Takemoto, a civil engineer, and Mitama Tateyama Takemoto. Both parents were the children of Japanese immigrants who had moved to Hawaii at the turn of the century to work on sugar cane plantations in Maui. An exceptionally bright and engaging child, Patsy did well in school and was popular with her peers, despite frequent encounters with racial prejudice: whites of European ancestry constituted an elite ruling class in Hawaii, at that time a U.S. territory. Moreover, prejudice against Hawaiians of Japanese descent intensified after the 7 December 1941 Japanese bombing of the U.S. naval base at Pearl Harbor, a Hawaiian port city. Nevertheless, encouraged by her family, Patsy used her intelligence and interpersonal skills to advantage: she was elected the first female president of the student body at Maui High School, and she became the valedictorian of her graduating class in 1944.

Though well aware of the obstacles to professional accomplishment that she faced as both an Asian American and a woman, Takemoto was intent on a career in medicine. She studied for two years at the University of Hawaii, then moved to Chambersburg, Pennsylvania, to attend Wilson College, an all-female institution, for a semester. Disappointed in its science program, she moved on to the University of Nebraska, where she joined with other minorities to protest segregation—specifically, the university's policy of housing foreign students in a separate campus facility. Illness, however, forced her to return home, and following her recovery she studied zoology and chemistry at the University of Hawaii, from which she received her undergraduate degree in 1948. She reportedly applied to twenty medical schools both in Hawaii and on the U.S. mainland, but was rejected by all of them, ostensibly because of her sex.

Following graduation, Takemoto was hired as a temporary clerical worker at the Honolulu Academy of the Arts. Her female boss, impressed by her intelligence and sympathetic to her plight, suggested that she might consider law as a profession, noting that law schools might be somewhat more receptive to female applicants, especially those from outside the U.S. mainland. Through an administrative error, Takemoto was admitted in 1948 as a “foreign” student to the University of Chicago Law School, where again she excelled in her studies. At Chicago she met a fellow graduate student, John Mink, a Caucasian hydrologist and geologist; they were married in 1951, despite the opposition of both sets of parents, who feared that an interracial marriage would cause their children to be ostracized. Patsy Takemoto Mink graduated from law school that year, but she was turned down for employment at area law firms. Now pregnant with her only child, a daughter, she worked at the University of Chicago law school library until giving birth, then returned to Honolulu with her husband. When she was unable to find work at law firms there, her father loaned her the money to establish her own practice, specializing in family and criminal law. Mink thus became the first Japanese American female attorney in Hawaii. She also began teaching at the University of Hawaii law school and remained on the faculty until 1956; she subsequently returned to teach in 1959–1962 and again in 1979–1981.

Meanwhile, in 1953, Mink had been admitted to the Hawaii bar, and over the next few years she became involved in local Democratic Party politics. The Republican Party was then the dominant political force in Hawaii. She founded the Oahu Young Democrats as well as the Hawaii Young Democrats, and also served as an attorney for the Territory of Hawaii House of Representatives. In 1954 Mink ran for a seat in that body but was defeated; running again two years later, she was successful in her bid and thus became the first Asian American woman elected to the Hawaii house. While serving her two-year term, Mink was also elected vice president of the National Young Democrats of America in 1957 and held that post for two years.

Mink remained politically ambitious, and in 1958 she was elected to the Territory of Hawaii Senate. A year later the bicameral territory legislature was dissolved when Hawaii became a state, and in a special election to select a representative from Hawaii to the U.S. Congress, Mink ran in the Democratic Party primary against Daniel Inouye, a fellow Japanese American. Inouye won, however, putting a temporary halt to Mink's service as a legislator. She returned to private practice and to the University of Hawaii law school faculty, but she remained active in Democratic Party politics. In 1960 she was a delegate to the Democratic National Convention, held in Los Angeles, which nominated John F. Kennedy for president, and she attracted national attention when she gave a speech there on civil rights, linking the efforts of the burgeoning movement for black equality to antidiscrimination efforts among Asian Americans. During this time she also made news when she joined the National Association for the Advancement of Colored People, an activist organization with a largely African American membership.

In 1962 Mink ran for election to the Hawaii State Senate and was successful in her bid. Two years later she was victorious in her race for a seat in the U.S. Congress. During the following twelve years in the House of Representatives—she was reelected to five consecutive terms—Mink became known as an outspoken defender of principles she believed in, no matter how unpopular they might be. She was an early supporter of a successful effort to allow female members of Congress to use the heretofore all-male House gym, and she later forced the resignation of Dr. Edgar F. Berman, a prominent physician, from a subcommittee of the national Democratic Party after he asserted that “raging hormones” made women unsuitable for executive positions in government and business. When President Richard M. Nixon nominated G. Harrold Carswell, a federal court judge, to the U.S. Supreme Court in January 1970, his appointment seemed assured. Mink, noting that some of his rulings had been injurious to the rights of both women and black Americans, testified against him at his Senate confirmation hearing. Her widely reported opposition sparked an anti-Carswell movement in the media, and in April the Senate voted to deny him a court seat.

Mink was a champion of women's rights, but she avoided being characterized as a feminist. In the late 1960s she became an increasingly outspoken opponent of the ongoing Vietnam War, risking criticism from constituents who accused her of being unpatriotic and, perhaps more important, of ignoring the fact that their state, as a major deployment center for U.S. troops, benefited economically from the war effort. In Congress Mink worked tirelessly on behalf of legislation in the fields of civil rights, including those of women and children, as well as health care, welfare, and education. One of her greatest legislative accomplishments was the passage in October 1972 of Title IX of the Higher Education Act Amendments, known as the Equal Opportunity in Education Act. Mink was the principal author of the act, which prohibited gender discrimination in all federally funded educational institutions; one of its most significant consequences was the considerable growth of women's athletic programs in American schools and colleges.

Earlier in 1972, Mink had declared herself a candidate for the U.S. presidency as a way of focusing attention on political issues she deemed important, including civil rights, increased federal aid to education, and continued opposition to American involvement in Vietnam. Other candidates, however, had greater support, and Mink withdrew her candidacy after failing to win the Oregon primary, in which she received less than 2 percent of the vote. At the Democratic National Convention in August, George McGovern became the party's presidential nominee, and Mink supported his unsuccessful run that fall while campaigning for her own return to the House.

Reelected in 1972 and again in 1974, Mink continued to champion social causes and voice her opposition to the Vietnam War, which finally ended with a peace agreement in the spring of 1975. The following year she coauthored the Surface Mining and Reclamation Act, which brought federal regulation to the strip mining of coal as well as provided for related environmental cleanup and repair. Also in 1976 she coauthored the Mineral Leasing Act, which restricted mining on public lands. Both laws are considered milestones in the modern American environmental movement.

In 1976 Mink chose to run for the U.S. Senate, effectively relinquishing her House seat. After she lost the election in November to her Republican opponent, Spark Masayuki Matsunaga, the newly elected President Jimmy Carter, a Democrat, named her Assistant Secretary of State for Oceans and International Environmental and Scientific Affairs. She remained in that post for two years before returning with her family to Honolulu at the end of 1978 to resume teaching at the University of Hawaii law school. Mink maintained a national presence, however, serving as president of Americans for Democratic Action, a liberal political organization, from 1978 to 1981. She also became active again in local politics, and from 1983 to 1987 served on the Honolulu City Council; she was chairman of the council from 1983 to 1985.

In 1990 Mink was elected to her old House seat in a special election, caused by the resignation of the incumbent, Daniel Akaka, to accept an appointment as U.S. Senator. Back in Congress, Mink resumed her support of legislative initiatives for civil rights, education, and welfare as she continued to win reelection over the next decade. During this time she founded the Congressional Asian Pacific Congress and served as its chairwoman, beginning in 1995. She was also an outspoken opponent of another Supreme Court nominee, Clarence Thomas, when he appeared before the Senate for confirmation in the spring of 1991. Mink, along with others, believed reports that Thomas was involved in sexual harassment of women in the workplace during his tenure as a judge and as a U.S. Department of Justice official. Despite opposition, however, Thomas was confirmed.

In 2002 Mink again announced her candidacy for reelection to the House and easily won the Democratic primary. Late that summer she contracted chicken pox and had to be hospitalized as her condition worsened. Her death, from pneumonia in a Honolulu hospital, was unexpected, but it was too late to remove her name from the ballot for the November election and she was posthumously reelected. (A special election was held afterward to fill her seat.) Meanwhile, a month after her death, House colleagues paid tribute to her memory by renaming Title IX the Patsy T. Mink Equal Opportunity in Education Act.