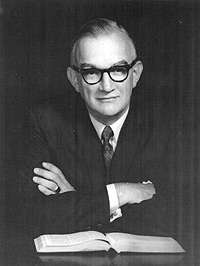 Courtesy of Indiana University of Pennsylvania.

Saylor, John Phillips (23 July 1908–28 October 1973), conservationist, was born on a farm near Johnstown, Pennsylvania, the son of Tillman Saylor, an attorney, and Minerva Phillips Saylor, a former schoolteacher. After graduating from Johnstown High School at age sixteen Saylor attended Mercersburg Academy in south central Pennsylvania, a college preparatory school for boys. He struggled academically but nonetheless was accepted at Franklin and Marshall College in Lancaster, Pennsylvania. After graduating in 1928, he went on to law school at the University of Michigan but left that program to attend Dickinson School of Law in Carlisle, Pennsylvania, from 1930 to 1933. On graduation, he joined his father's law firm and in 1937 married Johnstown schoolteacher Grace Doerstler. They had two children. In 1942 Saylor joined the navy. He served as a communications officer aboard the U.S.S. Missoula and participated in the invasion of Iwo Jima. After the war he returned to Johnstown and resumed his law practice. But in 1949, after the district's newly elected congressman had died in a plane crash, Saylor won a special election to succeed him. He would win twelve more congressional contests, serving until 1973.

A hulking man who wore black-rimmed glasses, Saylor stood 6' 4'' and weighed 240 pounds. He was affable, outgoing, and hardworking, with a flair for humor and showmanship. He also could be blustery, cantankerous, intimidating, and vindictive. “He was a large man, with a large voice, and he liked to use it,” recalled one staff member (Smith, p. 556). A Republican, he represented Armstrong, Cambria, and Indiana counties in western Pennsylvania. Because the district was heavily dependent on coal mining, he was assigned to the House Interior and Insular Affairs Committee. On that committee, he rose to ranking minority member and made his mark as the leading conservationist in the House of Representatives.

Saylor's conservation perspective, which stressed the preservation of wilderness and the inviolability of the national park system, was shaped by several forces. Growing up in western Pennsylvania, he hunted, fished, hiked, camped, and developed a love for the outdoors. At a young age he accompanied his family to Yellowstone and became a lifelong champion of the national parks. A religious man, he believed that preserving resplendent landscapes brought individuals closer to the Creator. He also was influenced by the emerging ecological outlook following World War II that emphasized wilderness preservation, environmental protection, and the interconnectedness between humans and the natural world. Moreover, the economic interests of his congressional district prompted his opposition to public power projects such as atomic generators and massive federal hydroelectric dams on western rivers because they competed with coal as a source of electricity. His antipathy toward public power brought him into conflict with the Interior Department's Bureau of Reclamation, the government agency mainly responsible for federal dam building in the West, and western legislators who favored multipurpose dams because they provided water to irrigate arid lands and cheap electricity to attract industry.

Saylor first made an impact as a conservationist in the mid-1950s during the battle over the Colorado River Storage Project (CRSP) bill. That measure proposed a series of federally constructed multipurpose dams in the Colorado River watershed to provide water storage, irrigation, and hydroelectric power to Colorado, Utah, Wyoming, and New Mexico. A large hydroelectric dam located at Echo Park near the confluence of the Green and Yampa Rivers would have flooded part of Dinosaur National Monument on the Utah-Colorado border. Conservation organizations such as the Sierra Club, Wilderness Society, and National Parks Association denounced the project because Echo Park dam would set an alarming precedent by intruding upon a nationally protected area. With Saylor spearheading the opposition in the House, saying that the project would violate a “beauteous stretch of wilderness in a cherished national monument,” preservationists managed to delete Echo Park dam from the bill. Saylor's dogged defense of Dinosaur Monument earned the gratitude and respect of leading conservationists across the nation.

During the debate over the Pacific Southwest Water plan, one of the most heated conservation battles of the 1960s, Saylor successfully led House opposition to the proposed construction of two mammoth federal power dams at Bridge and Marble Canyons on the lower Colorado River because the impounded water would have encroached upon Grand Canyon National Monument. Closer to home, Saylor unsuccessfully opposed federal construction of Kinzua Dam on the Allegheny River in western Pennsylvania. He was the only member of Pennsylvania's congressional delegation to denounce Kinzua Dam because it would flood lands of the Seneca Nation, thus violating a federal treaty that had stood since 1794.

Saylor is best known as the architect of two landmark pieces of conservation legislation. In 1964 after a nine-year battle, the Wilderness Act, which set aside nine million acres of pristine land in the American West, was approved by Congress and signed into law. Four years later, the Wild and Scenic Rivers Act protected eight free-flowing rivers from future dams and commercial development. Both measures provided for future additions to the program. By the turn of the century, the wilderness system encompassed more than 100 million acres and the wild and scenic rivers program numbered more than a hundred streams.

Besides protecting wild places and national preserves from economic development, Saylor worked during the 1960s to protect the environment (the Clean Air and Clean Water Acts) and to add scenic and remote lands to the national park system—national seashores at Cape Cod (Mass.), Padre Island (Tex.), and Point Reyes (Calif.), and national parks at Canyonlands (Utah), Redwoods (Calif.), and North Cascades (Wash.). He helped push through Congress the Land and Water Conservation Fund that created revenue to purchase additional wild lands through user fees at federal recreational areas. He also coauthored legislation granting statehood to Alaska and Hawaii.

Known affectionately as “St. John” by many conservationists, Saylor won awards and acclaim for his work from the Sierra Club, Wilderness Society, Izaak Walton League, National Parks Association, and National Wildlife Federation. Arguably the most forceful and influential preservationist in Congress in the twentieth century, Saylor died in Houston, Texas, following heart surgery in late October 1973.

Saylor wrote an essay on his conservation hero, Theodore Roosevelt, titled “The Conservation Legacy of Theodore Roosevelt,” National Parks Magazine 32 (July–Sept. 1958), pp. 114–16. And he championed the preservation of wilderness and scenic rivers in “Saving America's Wilderness,” The Living Wilderness 21 (Winter–Spring 1956–1957), pp. 1–12, and “Once Along a Scenic River,” Parks & Recreation 3 (Aug. 1968), pp. 20–21, 57–58. For an overview of Saylor's career and his efforts to preserve wild rivers, see Thomas G. Smith, “Voice for Wild and Scenic Rivers,” Pennsylvania History 66 (Autumn 1999): 554–79. His congressional papers are housed at the Indiana University of Pennsylvania. An obituary is in the Washington Post, 29 Oct. 1973.