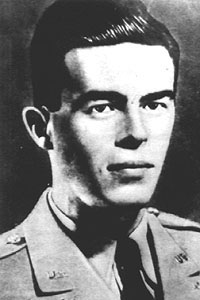 In uniform with the rank of captain.

Courtesy of the Library of Congress.

Birch, John (28 May 1918–25 August 1945), Baptist missionary and military officer, was born John Morrison Birch in Landaur, India, the son of George S. Birch and Ethel Ellis Birch. Both parents were Methodist missionaries under the auspices of the Presbyterian Church, U.S.A. George Birch was also an agricultural professor at Ewing Christian College, Allahabad, India, while Ethel Birch tutored English there and conducted women's Bible classes nearby. In 1920 the family returned to the United States. George Birch became a fruit farmer in Vineland, New Jersey, where John Birch first went to school. In 1930 the family, by then including seven children, moved to Rome, Georgia, where Birch attended high school. After graduating at the head of his class, he entered Mercer University; there, he deepened his religious convictions and evangelical passion and graduated magna cum laude in 1939. He completed a two-year course at the Bible Baptist Seminary in Fort Worth, Texas, in one year and then left in July 1940 for China, sponsored by a World's Fundamentalist Baptist Missionary Fellowship.

Birch studied Chinese in Shanghai, quickly developed a moderate mastery of the language, and undertook missionary proselytizing in Hangchow. When Pearl Harbor was bombed and the United States and Japan went to war, in December 1941, Birch eluded a Japanese military detachment sent to arrest his group, fled 250 miles southwest to Shang-jao, Kiangsi Province, and continued to work, fearlessly, with diminishing numbers of free Chinese.

On 18 April 1942 Lieutenant Colonel James H. Doolittle led sixteen American B-25 bombers on a daring raid on Tokyo, Kobe, Yokohama, and other Japanese cities. By chance, Birch was at an inn near Shang-jao when a native of the area quietly spoke to him and led him to Doolittle and several other airmen, who had crash-landed or parachuted to safety and were being hidden by Chinese patriots in Chekiang Province. Birch led the survivors to safety. Having already applied to the American Military Mission in Chungking to be a chaplain, Birch was happy on 27 April to be ordered to that city. After an arduous trek, he arrived in June at Kuei-lin (Kweilin), Kwangsi Province, where he chanced to encounter Colonel (later Lieutenant General) Claire Lee Chennault, commander of the American Volunteer Group. He gave Birch, whom Doolittle had recommended to him, his first plane ride—to Chungking—and on 4 July commissioned him as a first lieutenant in his unit. Birch became Chennault's interpreter, intelligence officer, radio operator, and cartographer in Chungking and K'un-ming. In March 1943 Chennault's unit was renamed the 14th Air Force, and Birch worked as an air-ground liaison officer under Marshal Hsueh Yo, the Chinese War Area commandant. Birch saved many downed American airmen, trained Chinese soldiers as radio operators and cryptographers, transmitted valuable combat and political information to Chennault's headquarters, and learned to fly small planes.

The absence of detailed information about his activities made Birch a legend and, later, a convenient name on which to hang extremist views. Until mid-1944 Birch, promoted to captain, sent intelligence reports from Japanese-held spots north of the Yangtze River and organized supply drops to Chinese ground troops. On 17 July Chennault awarded him the Legion of Merit. By spring 1945 Birch was using two secret airfields he had planned and helped build for personnel-rescue and forward-supply missions. In May 1945 he was transferred to the Office of Strategic Services as an intelligence officer and continued his perilous work.

By the time Japan surrendered on 15 August 1945, the Soviet Union had tardily entered the war against Japan, and Communist Chinese forces were exerting political and military pressure in many parts of mainland China. Birch volunteered to lead a twelve-man mission from an Anhwei Province airfield to a so-called “pocket of disturbance” in Tsingtao, on the Shantung Peninsula. On 25 August, after nine days of travel by air, horseback, boat, automobile, and railroad coach and handcar, they reached a point on the Lunghai railroad near Süshow. Birch encountered a squad of Communist guerrillas from the 8th Route Army engaged in sabotaging telephone wires. Surrounded, he was asked to turn over all or part of his equipment. When he refused, he and Lieutenant Tung, his Chinese aide, were escorted by two guerrillas to Huang-ko, a nearby village, to confer with the Communist officer in charge. The other members of Birch's unit were captured, disarmed, and, after hearing two shots, taken to pro-Communist Yenan—to be released two months later. Lieutenant Tung, shot in the leg and then bayoneted, was left for dead, but a friendly Chinese woman rescued him that night. Treated in Süshow and Chungking, Tung recovered but lost an eye and a leg. Birch, also shot in the leg, was repeatedly bayoneted and left to die; he was buried by friendly Chinese farmers. Nationalist forces, who soon received word of the incident, came and questioned the local people, and were shown Birch's temporary grave. They exhumed his body, identified its grievous wounds, and took it to Süshow. Delivered to American army personnel of the Air Ground Aid Service stationed there, it was wrapped in white silk, placed in a Chinese coffin, and reburied with full military honors in a mausoleum on a hillside overlooking the town.

The death of this American hero at the hands of Chinese Communists ten days after VJ-Day was hushed up, and to this day certain facts remain “classified.” Even after a War Department internal memo dated 20 September 1945 said Birch was killed by Chinese Communists near Süshow on 25 August 1945, War Department officials told his parents he had been killed by a stray bullet, omitted mention of Communists, and said that addresses of his fellow American soldiers privy to details of his death had been lost or misplaced. Mao Zedong even averred that his forces had mistaken Birch and his party for Japanese in disguise. Robert H. W. Welch, Jr., a strident Christian anti-Communist, unearthed details about Birch, extolled him in a 1954 biography, and four years later founded the John Birch Society. It is through Welch's shadowy group that Birch's name entered the American political lexicon. No one can say whether he would have endorsed the John Birch Society's paranoid vision of Communist infiltration at the highest levels of American government. But he will retain a place in history because of the extremism promoted in his name.

Robert H. W. Welch, Jr., The Life of John Birch: In the Story of an American Boy, The Ordeal of His Age (1954), is a laudatory biography. Birch's daring exploits in China are gratefully summarized in Claire Lee Chennault, Way of a Fighter: The Memoirs of Claire Lee Chennault, ed. Robert Hotz (1949), and in James H. Doolittle, with Carroll V. Glines, I Could Never Be So Lucky Again (1991). Measures of Birch's personal postwar anonymity, however, are his going unmentioned in both Jack Samson, Chennault (1987), and Lowell Thomas and Edward Jablonski, Doolittle: A Biography (1976). J. Allen Broyles, The John Birch Society: Anatomy of a Protest (1964), begins with a biographical sketch of Birch. See also James and Marti Hefley, The Secret File on John Birch (1995). Gerald Schomp, Birchism Was My Business (1970), is a tragicomic exposé of John Birch Society extremisms. The first notice of Birch's death appeared in a column by Constantine Brown in the Washington Star, 16 Nov. 1945.