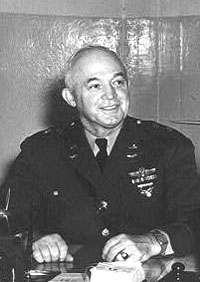 Arnold, Henry Harley (25 June 1886–15 January 1950), airman, was born in Gladwyne, Pennsylvania, the son of Herbert Alonzo Arnold, a physician, and Anna Louise Harley. Arnold received a public education and in 1903 entered the U.S. Military Academy at West Point. A mediocre student, he graduated in the middle of his class in 1907 and was commissioned a second lieutenant of infantry. He served four years with the Twenty-ninth Regiment in the Philippines and New York before volunteering for flight training with the Aviation Section of the Signal Corps. In April 1911 Arnold reported to Dayton, Ohio, and received instruction from the Wright brothers. Two months later he joined the army’s first cadre of military aviators. Arnold subsequently transferred to College Park, Maryland, as a flight instructor and on 1 June 1912 established a world altitude record of 6,540 feet. This act garnered him the first-ever Mackay trophy.

Arnold proved himself to be a natural flier who distinguished himself in a number of capacities. He helped pioneer aerial reconnaissance in December 1912 by becoming the first pilot to report his observations by radio. In September 1913 he married Eleanor A. Pool; they had four children. Following some near accidents and the loss of several friends, Arnold quit flying for three years to accept reassignment with the Thirteenth Infantry in the Philippines. He resumed flying in October 1916 and joined the Aviation Section at Rockwell Field in San Diego, California.

By 1917 Arnold headed the Seventh Aero Squadron in the Panama Canal Zone. Following American entry into World War I, he transferred back to Washington, D.C., where on 21 May 1918 he was promoted to brevet colonel. Arnold actively sought a combat assignment but was retained at home as assistant executive officer of the newly formed Office of Military Aeronautics. By February 1918 he was assistant director. Arnold finally arrived in France shortly after the armistice and spent several months inspecting and evaluating aerial facilities.

The interwar years were a period of growth and controversy for military aviation, and Arnold was at the forefront of events. He received numerous assignments along the Pacific Coast, where he pioneered air patrolling of forests for the Conservation Corps and in-flight refueling of aircraft. Arnold then expanded his technical acumen between 1925 and 1926 by attending the Army Industrial College and, from 1928 to 1929, the Command and General Staff School. Following a brief tour as chief of the Information Division, Office of the Chief of the Air Corps, he rose to lieutenant colonel in February 1931 and then served as commander of March Field, Riverside, California. Mindful of technological trends, Arnold deliberately cultivated close personal ties with the scientific faculty at the nearby California Institute of Technology. Seeking to expand public awareness of military aviation, he also cooperated closely with the Hollywood film establishment on a number of aerial productions. Convinced of the potential of aircraft in modern war, he authored or coauthored with Ira C. Eaker five books on the subject for young and general audiences.

Arnold’s subsequent military activities attracted nationwide attention. A disciple of General William “Billy” Mitchell, Arnold testified on his behalf during Mitchell’s celebrated court-martial. He also oversaw the unsuccessful army attempt to deliver mail in the western air mail zone in 1934, which failed on account of inferior equipment and inadequately trained personnel. Though the nominal commander, Arnold was absolved of any blame and continued flying. Between 19 July and 20 August of that year he conducted a spectacular flight of ten Martin B-10 bombers on a 5,290-mile roundtrip flight from Washington to Fairbanks, Alaska, demonstrating the potential for strategic bombing. For this feat he received his second Mackay trophy.

In recognition of his accomplishments, Arnold was promoted to temporary brigadier in February 1935 and appointed to command the First Wing of the newly created General Headquarters (GHQ) Air Force at March Field. In January 1936 he was recalled to Washington as assistant chief of the Air Corps. He served in this capacity until September 1938, when he rose to major general to succeed General Oscar Westover, who had died in a crash, as chief. His title changed to chief of the Army Air Force in July 1941, and in this capacity he was a spokesman for army aviation at the Atlantic Charter Conference, Argentia, Newfoundland, in August, 1941. He rose to lieutenant general in December 1941.

U.S. entry into World War II was marked by dramatic expansion of the size, mission, and capabilities of army air power. Arnold, by virtue of his technological expertise and industry wide contacts, was ideally positioned to orchestrate production increases. Under his aegis the Army Air Forces mushroomed from 22,000 men and 3,900 aircraft to 2.5 million personnel and 63,715 planes arrayed in 243 combat groups. He also addressed and resolved issues of close-air support, long-range escort fighters, and creation of a worldwide air transport net. Furthermore, as these assets were deployed, Arnold strove tirelessly to ensure they were utilized effectively. In May 1942 he flew to London to confer with high-ranking British airmen to develop and coordinate air offensive strategy against Germany. Foremost among his concerns was retention of daylight, precision bombing for American forces instead of less costly but less accurate nighttime air bombing, as practiced by the Royal Air Force. For the next three years Arnold represented American air interests at all major Allied conferences with the exceptions of Washington in 1943 and Yalta in 1945, when he was sidelined by heart ailments.

Arnold joined the Joint Chiefs of Staff in March 1942 as air member but, despite his work load, he would not be chained to a desk. In September 1942, following a tour of the Pacific war zone, he completed a record-breaking flight from Brisbane, Australia, to San Francisco. In 1943 he rose to four-star general and concluded a 35,000-mile tour of North Africa, the Middle East, India and China. Promoted to five-star general of the army in December 1944, Arnold also directed B-29 operations of the Twentieth Air Force from his Pentagon office, culminating in the atomic bombings of Hiroshima and Nagasaki. Although he suffered intermittent heart problems brought about by stress, he strove tirelessly to ensure that American air power was a vital contribution to the Allied victory.

Poor health necessitated Arnold’s retirement in March 1946. He withdrew to his ranch home in the Valley of the Moon, near Sonoma, California, where he penned his memoirs, Global Mission, in 1949. That year a special act of Congress made him the first general of the Air Force, which had become a separate entity in 1947. Arnold died at his home.

More than any other individual, Arnold’s career closely paralleled the growth, fortunes, and ultimate triumph of American air power. Personally contributing many of its milestones, he was the most technologically astute airman of his generation and worked closely with scientists such as Theodore von Kármán to ensure American supremacy in aviation. Furthermore, like his mentor Mitchell, Arnold realized the importance of air power in modern warfare; but unlike Mitchell, he had the perspicacity not to antagonize conservatively minded superiors in that quest. Consequently, the tactful Arnold functioned with a near-autonomy that presaged the creation of an independent air force. Neither a great strategist nor organizer, his greatest contribution was in orchestrating the creation of the world’s largest air force and leading it to victory.