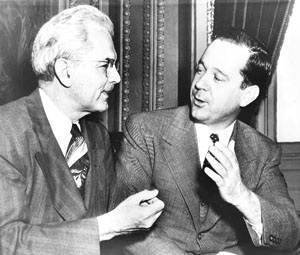 Holland, Spessard Lindsey (10 July 1892–06 November 1971), lawyer and politician, was born in Bartow, Florida, the son of Benjamin Franklin Holland, an owner of a citrus grove and general farm, and Fannie Virginia Spessard, a teacher in the Summerlin Institute, Bartow. His paternal grandfather, Lindsay Holland, served in the Georgia legislature, and his maternal grandfather, Nat Spessard, served in the Virginia legislature. Holland attended Emory College, Oxford, Georgia, from the fall of 1909 until June 1912, graduating magna cum laude while earning letters in track and football. He then taught high school in Warrenton, Georgia, for two years before enrolling at the University of Florida Law School in Gainesville, Florida, in 1914. Holland served as president of the student body and graduated with an LL.B. in 1916, finishing second in his class. He earned letters in basketball and baseball. Connie Mack, the manager of the Philadelphia Athletics, offered Holland a professional contract after Holland struck out five Athletics in an exhibition baseball game.

Admitted to the Florida bar in 1916, Holland went into partnership with R. B. Huffaker in Bartow. He then volunteered for service in World War I and was commissioned a second lieutenant in August 1917, initially with the Coastal Brigade. Assigned to France, Holland was with the Thirty-first Heavy Artillery Brigade Headquarters and later with the Twenty-fourth Squadron Air Corps as an air observer. He won a Distinguished Service Cross and retired from service as a captain on 16 July 1919. He married Mary Agnes Groover in February 1919. They had four children.

Holland began his political career as a Democrat when he was appointed as the prosecuting attorney for Polk County, Florida, in 1919. He was elected a county judge the next year and held that office until he retired in 1928. Holland was elected in 1932 to the Florida State Senate, where he remained until 1939, when he ran for governor. In the state senate he helped end the state’s poll tax because he thought it led to unsavory machine control and denied poor whites and blacks a voice in their government. Holland became governor in 1940, when he defeated Francis P. Whitehair in a runoff by 66,000 votes. As wartime governor of Florida he set up the state civil defense, helped develop the Everglades National Park and the State Parole Commission, and supported a large expansion of the road-building program in Florida. In 1946 sitting U.S. senator Charles O. Andrews chose not to run for reelection because of ill health. Holland, by now a seasoned and well-known politician, won the Democratic nomination on 7 May 1946 with 60.7 percent of the votes and defeated the Republican candidate in November. When Senator Andrews died in office, Governor Millard Caldwell appointed Holland, on 25 September 1946, to fill out Andrews’s unexpired term. Holland began serving his full six-year term on 3 January 1947. He easily won reelection to the Senate every six years until he decided to retire on 3 January 1971 because of ill health.

In the Senate Holland initially served on the Rules Committee and the District of Columbia Committee, but he spent most of his time on the Appropriations, Judiciary, Public Works, Agriculture (twenty-two years), and Space (ten years) committees. Senator Holland strongly supported President Harry Truman’s Cold War policies, voting in favor of the Truman Doctrine, the Marshall Plan, and the North Atlantic Treaty Organization, and he favored sending troops to Korea. He voted for statehood for Alaska and Hawaii, the space program (of great economic benefit to Fla.), and the St. Lawrence Seaway, and he actively participated in the enactment of the Taft-Hartley Act. He helped develop the original interstate highway program, opposed the vote for eighteen year olds, and worked hard for the completion of the Inter-American Highway to link the United States culturally and economically with Latin American countries. Holland believed strongly in states’ rights and helping individual initiative through the free enterprise system. He characterized himself as a moderate conservative and expressed his political philosophy in his 1941 inaugural address as governor, “Government must be honest, liberal, efficient, economical, wholly non-sectional, and soundly democratic.” Holland opposed civil rights legislation, school integration, and the Voting Rights Act of 1965. He also voted against antipoverty bills, Medicare, and federal aid to schools. However, he differed from many of his southern colleagues on the issue of the poll tax. In every congressional session beginning in 1949 he introduced a constitutional amendment to outlaw the poll tax nationwide. Finally, in February 1964, despite vigorous opposition from southern conservatives, three-fourths of the states ratified the Holland Bill, making it the Twenty-Fourth Amendment to the Constitution. Senator Holland took pride in his sponsorship of the Tidelands Bill, in which the federal government returned to individual states (including Fla.) their property rights in the submerged coastal belts.

Lyndon Johnson called Holland one of the five most powerful men in the Senate. Senator Robert Byrd, in the congressional tribute to Holland, said, “I never met a more fair-minded individual, one more dedicated or more conscientious in serving the people.” The Tampa Tribune, on 7 November 1971, concluded that Holland left the stamp of good government on every office he held and was particularly adept at serving his constituents. His last months were spent as a partner in the firm of Holland and Knight in Bartow. He died in Bartow.

As a conservative southern Democrat, Holland consistently voted for states’ rights, and with a few exceptions, such as the space program, the federal poll tax (perhaps his greatest achievement), and federal highway development, he opposed federal intrusion into state activities through such bills as the Civil Rights Act of 1964. His paternalistic view toward blacks and immigrants, while popular in the South, demonstrated a provincial mind-set. He was a nationalist and fervent anti-Communist who seldom left the United States and concentrated on domestic rather than foreign policy. An excellent wartime governor and a capable politician always attentive to the needs of his constituents, Holland was one of the most respected and popular political figures in Florida during the twentieth century. He served on the boards of trustees at Florida Presbyterian College, Florida Southern College, and Emory University. He was a member of the Methodist church, American Legion, Veterans of Foreign Wars, Phi Beta Kappa, Kiwanis Club, and Elks Club. The law school at the University of Florida is named after him.

Holland’s complete papers, including the draft of an unfinished autobiography, are in the P. K. Yonge Library of Florida History at the University of Florida, Gainesville, Fla. These papers also include his gubernatorial and Senate papers, election materials, newspaper clippings, and personal files. Holland put out a weekly newsletter for constituents called the Washington Report from 9 Feb. 1947 through 2 Jan. 1971. He wrote an article, “Coming Soon—An Engineer’s Dream,” American Engineer, June 1953, pp. 9–13, about the Inter-American Highway. Holland is mentioned frequently in history books about the state of Fla. and in Numan V. Bartley and Hugh D. Graham, Southern Politics and the Second Reconstruction (1975). Other sources include the official program of his inauguration as governor on 7 Jan. 1941, which is included in his papers; “The Spessard Holland Story,” telecast on station WFLA-TV, Tampa, Fla., 7 Jan. 1965; an interview by Bill Henry, “The Holland Years,” WFLA-TV, Tampa, Fla., 24 June 1971; Charles Stafford, “Senator Spessard Holland: Statesman and Southerner,” St. Petersburg Times, 11 Oct. 1970; Tampa Tribune, 7 Nov. 1971; and the Polk County Record in Bartow throughout his life. In addition to the Congressional Record, 26 Sept. 1946–3 Jan. 1971, see Tributes to the Honorable Spessard Lindsey Holland of Florida in the Senate of the United States Commemorating Twenty Years of Service as a Senator (1966) and Memorial Addresses and Other Tributes in the Congress of the United States on the Life and Contributions of Spessard Holland (1972). Obituaries are in the Tampa Tribune and the New York Times, 7 Nov. 1971.