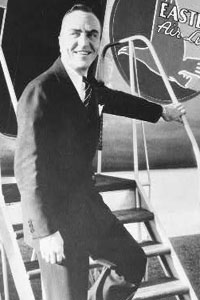 Standing on the steps of an Eastern Air Lines airplane, c. 1930.

Rickenbacker, Edward Vernon (08 October 1890–23 July 1973), aviator and airline executive, was born in Columbus, Ohio, the son of William Rickenbacher, a construction worker and bridge builder, and Elizabeth Baseler. The son of Swiss immigrants, “Eddie” Rickenbacker’s formal education ended when he was thirteen and in seventh grade, after his father was fatally injured in a construction accident. He dropped out of school and began working twelve-hour night shifts in a factory to help support his family. His only academic preparations after that came from correspondence courses in mechanical and automotive engineering. He worked in a machine shop, an automobile garage, and for the Frayer-Miller Company, which manufactured automobiles.

A quick learner, a hard worker, and mechanically talented, Rickenbacker in 1908 moved on to the Firestone-Columbus automobile manufacturing company. That led to maintenance and sales accomplishments in Texas, Arizona, Nebraska, and Iowa. As an extension of his sales activities, Rickenbacker (by then nineteen years old and 6′ 2″ tall) began entering local car races—and winning. The racing cars he drove had their share of mechanical breakdowns and accidents, but Rickenbacker won victories. He drove in his first Indianapolis Speedway races in 1911 and 1912 and turned to racing full time. Victories in major races brought him prize money, fame, and contacts with influential people. He never stopped learning from his experiences.

A chance meeting with aviation pioneer Glenn Martin in 1916 provided Rickenbacker with his first airplane ride—and pointed him in the direction his career was to take later. Driving a Duesenberg, Rickenbacker won his final racing victory on Thanksgiving Day 1916 at Ascot Park in Los Angeles.

A short visit to England at the end of 1916 gave Rickenbacker a look at that country in wartime and at Royal Flying Corps planes in flight. That confirmed his growing aviation interest. After returning to the United States early in 1917, he urged American entry into the war against Germany. In May 1917, after the United States had declared war, Rickenbacker joined the army as a sergeant and sailed to England and on to France as a staff driver with General John J. Pershing’s American Expeditionary Force. He drove for Colonel William “Billy” Mitchell, who became America’s most famous air-power advocate.

Mitchell helped Rickenbacker get orders to flight training in France. After a couple of dual flights, he soloed; after twenty-five hours in the air he was commissioned a lieutenant in the Army Air Service. Assigned as engineering officer at the Issoudun flying school, where he did his advanced flight training, he completed gunnery training at Cazeau. In March 1918 he was ordered to the newly formed Ninety-fourth Aero Pursuit Squadron, the first American squadron in combat on the western front. It adopted the “hat-in-the-ring” insignia that grew famous along with Rickenbacker.

Rickenbacker scored his first victory in the skies on 29 April 1918. Before the end of May he had shot down his fifth German plane, becoming an ace. He changed the spelling of his name to make it appear less German. On 24 September Rickenbacker became commanding officer of the Ninety-fourth Squadron.

By the time the fighting ended on Armistice Day, 11 November 1918, Captain Eddie Rickenbacker had fought 134 air battles and had shot down a total of twenty-six German airplanes and balloons, making him America’s top ace (Ace of Aces) in World War I. Rickenbacker’s Ninety-fourth had more victories than any other American squadron. His numerous medals included the French Croix de Guerre with four palms, the American Distinguished Service Cross with nine oak leaf clusters, and the Congressional Medal of Honor. He was a charter member of the American Legion.

Back in the United States for a Liberty Bond drive in 1919, Rickenbacker was received with wild enthusiasm across the country. Both his earlier racing successes and his heroic accomplishments in the air during the war enabled him to meet prominent and powerful people in government and business; he never lacked contacts in business and finance to support his later ventures. In 1922 he married Adelaide Frost Durant, whom he had met in California before the war. The couple had two children.

After the war he organized the Rickenbacker Motor Company, which manufactured automobiles. Though the vehicles were innovative and of good quality, the venture failed in the mid-1920s and left Rickenbacker $250,000 in debt.

In 1927 he took over and revitalized the Indianapolis Speedway. He closed it during World War II and sold it after that war for the same amount he had paid for it originally.

Rickenbacker never lost his interest in aviation. Like Mitchell, he was frustrated by the failure of the government and military to develop American air power. In 1934 he took over management of Eastern Airlines. In 1938 he became president and general manager of Eastern, and in 1953 he became chairman of the board and continued as chief executive officer. He retained roles in Eastern’s operation until he retired in 1963.

As a devotee of free enterprise, Rickenbacker insisted that Eastern accept no government subsidies. His was a “hands on” management that extended down to the smallest detail and lowliest employee. He revitalized and expanded the airline, built worker morale, assured that the company kept up with developing aviation technology, accomplished an impressive safety record, and put Eastern in the black financially.

A conservative on domestic issues and an air-power and preparedness advocate, Rickenbacker had no use for President Franklin D. Roosevelt and his New Deal “socialism.” Visits to Europe in 1935 and 1939 alerted him to the alarming dangers posed by Adolf Hitler’s Nazi Germany. Originally Rickenbacker was a member of the national committee of the noninterventionist America First Committee, but he resigned early in 1941. With American involvement in World War II, Eastern Airlines made facilities and personnel available for the war effort.

Early in 1942 General Henry H. Arnold and Secretary of War Henry L. Stimson asked Rickenbacker to tour Army Air Corps bases in the United States to bolster morale and advise on improvements. He spoke to thousands of airmen and their leaders and provided helpful suggestions for improvements. That tour was so successful that Stimson asked him to go on a similar mission to England and then on one to the Pacific.

In 1942, on a flight from Hawaii en route to New Guinea, the plane on which Rickenbacker was a passenger missed the tiny Pacific island where it was to refuel and went down at sea. Though all eight people on board survived the ditching in the ocean, they floated in life rafts for twenty-four days before they were spotted from the air and rescued. One of them died, but Rickenbacker (the oldest) survived the terrible ordeal.

He had scarcely recovered from that adventure when Stimson asked Rickenbacker to go on another mission across the South Atlantic to North Africa, the Middle East, India, China, and the Soviet Union. Again he met with thousands of airmen as well as top military and political leaders. In the Soviet Union he conferred with Molotov, Litvinov, Marshal Zhukov, and other top military and aviation leaders. He flew over front lines and inspected Soviet aircraft. He provided Stimson, Arnold, and other American officials with a unique portrait of the Soviet war effort in 1943. After the war he resumed his peacetime responsibilities, as well as various philanthropic efforts on behalf of boys’ clubs and the Boy Scouts of America.

Eddie Rickenbacker was a daring racing driver and combat pilot. But he was much more. He became a highly skilled corporation executive and manager who contributed constructively to the economic life and strength of the United States and to the development of modern aviation transportation. He died in a Zurich hospital on a trip to Switzerland.

The best place to start in studying Rickenbacker’s life may be with his own book, Fighting the Flying Circus (1919), Seven Came Through (1943), and Rickenbacker (1967). For a scholarly volume on the American air war in World War I, see James J. Hudson, Hostile Skies: A Combat History of the American Air Service in World War I (1968). For a history of Eastern Airlines see Robert J. Sterling, From the Captain to the Colonel: An Informal History of Eastern Airlines (1980).