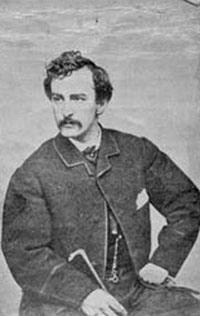 Booth, John Wilkes (10 May 1838–26 April 1865), actor and assassin of President Abraham Lincoln, actor and assassin of President Abraham Lincoln, was born near Bel Air in Harford County, Maryland, the son of Junius Brutus Booth, an actor, and Mary Ann Holmes. His grandfather, Richard Booth, named him after John Wilkes, the British reformer. As a child Booth dabbled in acting, as did some of his brothers and several neighborhood boys, both at the Booth country home, “Tudor Hall,” and at their town house in Baltimore. Booth’s father actively discouraged his children from entering the theatrical profession, but he toured extensively and died on the road when John was only fourteen.

Booth grew up as the darling of his family, somewhat spoiled and temperamental, receiving only intermittent education. One of his four sisters, Asia, recalled his “fitful gaiety” as a youth, tinged with a “taint of melancholy.” He followed his father and two older brothers onto the stage, making his professional debut in Baltimore on 14 August 1855 as Richmond in Richard III. The seventeen-year-old thespian failed miserably but returned home to study the actor’s craft. He next appeared at the Arch Street Theater in Philadelphia, then the theatrical center of America. The handsome young actor charmed his audiences, in spite of his overacting, faulty elocution, and general lack of discipline. He appeared once with his brother Edwin Booth, then performed for a season at Richmond, Virginia. During these and later engagements Booth used various names, apparently trying to protect the family name until he could add some professional luster to it. At the same time he began to develop a reputation as a womanizer and a considerable southern chauvinist. He went so far as to try to join a military group, but he had promised his mother he would not enlist and would continue his acting career.

When Booth returned to Richmond for another season, he learned of John Brown’s impending trial at Charles Town. Booth abandoned his job at the Richmond Theatre to attend Brown’s execution, later claiming to have helped capture Brown, writing, “I thought that the Abolitionists were the only traitors in the land and … deserved the fate of Brown.” Goaded by reports of his brother Edwin’s success as an actor, he soon sought to make himself into a star, thereby increasing his income and fame substantially. He began to appear as J. Wilkes Booth, often in roles that his father had made famous.

As the Civil War approached and theatricals in the South decreased, Booth began a northern tour, continuing to denounce President Lincoln and the North. In Baltimore he joined a rebel secret society called the Knights of the Golden Circle, wholly convinced that the North was unjustly oppressing his beloved South. He meanwhile continued to expand his professional and personal reputations. On 26 April 1861 one of Booth’s jilted lovers, actress Henrietta Irving, tried to kill him but succeeded only in slashing his arm.

By 1863 Booth billed himself as “the Youngest Tragedian in the World.” His passion for the Confederate cause intensified; he began to plot the kidnapping of President Lincoln, possibly with the intention of ransoming all Confederate prisoners held by the North. Toward the end of the war, he began to assemble a small band of conspirators in Washington, D.C. Whether or not Booth had any official mandate from the Confederacy remains unclear.

On 25 November 1864 Booth and his brothers Edwin and Junius, Jr., appeared together on the stage for the first and only time. The occasion was a benefit production of Julius Caesar in New York City to raise funds for a memorial statue of Shakespeare for Central Park. Edwin played Brutus; Junius, Jr., impersonated Caesar, and John Wilkes as Antony cried out for vengeance against the assassins. Mary Ann Holmes Booth, the actors’ aged mother, proudly attended the performance.

At his greatest popularity as an actor, Booth earned about $20,000 a year. His repertory grew to include The Lady of Lyons, Money, The Robbers, The Marble Heart, The Apostate, The Stranger, and The Corsican Brothers, as well as the Shakespearean roles of Richard III, Romeo, Hamlet, Macbeth, Othello, Iago, Shylock, and Petruchio. Admirers and critics described him as one of the most charming of men, admired by most men and adored by almost all women. His dark good looks resembled those of Edgar Allan Poe; a friend said he was as handsome as a young god. His acting was described as passionate, explosive, and uneven, lacking the intellectuality of his father or the quiet dignity of Edwin Booth, depending on charisma rather than craft or artistry. Later critics would denigrate his work, but John Wilkes Booth was definitely an actor with exceptional potential during the Civil War. He appeared on 18 March 1865, for the last time on any stage, as Pescara in The Apostate. The performance took place at Ford’s Theatre in Washington, D.C.

Booth grew increasingly obsessed with the subjects of slavery and the Confederacy. He recruited two boyhood friends, Michael O’Laughlin and Samuel Arnold, to assist him in kidnapping Lincoln, which they planned for 20 March. Lincoln did not appear as expected; the conspirators panicked and fled. Later Booth added David Herold and George Atzerodt to his band, completing it with Lewis Powell, known also as Lewis Payne. By this time Booth had become acquainted with a young rebel, John Surratt, and his mother, Mary Eugenia Surratt, a rebel sympathizer who operated a boardinghouse in Washington, in which the group would meet from time to time.

The kidnapping plot evaporated when the city of Richmond fell and the war ended. Five days later, on 14 April 1865, Booth learned that President Lincoln planned to attend Our American Cousin (starring Laura Keene) at Ford’s Theatre. Working quickly, Booth assigned Atzerodt to assassinate Vice President Andrew Johnson and Payne to kill Secretary of State William Seward while Booth himself murdered Lincoln. Atzerodt lost his nerve and made no attempt on Johnson, but Payne, a young giant, wounded Seward severely, as well as several others who tried to defend him.

Booth meanwhile had entered Ford’s Theatre at about ten o’clock, moving across the rear of the balcony to the president’s box. Waiting for the audience’s laughter to cover the report of his derringer, Booth entered the box and fired a single .44-calibre bullet at point-blank range into the back of Lincoln’s head. He shouted “Sic semper tyrannis! The South is avenged!” according to some, slashing with a dagger at Major Henry Rathbone, who tried to restrain him. Booth then leaped the twelve feet from the presidential box onto the stage, breaking his left leg. He escaped from the theater to a waiting horse, and, accompanied by Herold, fled Washington. They stopped at the home of Dr. Samuel A. Mudd in Bryantown, Maryland, to have Booth’s leg set, then hid in neighboring woods for six days while federal troops vainly searched for them.

By 23 April Booth and Herold had reached the farm of Richard H. Garrett, three miles south of Port Royal, Virginia, and seventy-eight miles from Washington. Garrett hid the fugitives in one of his tobacco barns. In the early morning of 26 April a band of soldiers arrived and surrounded the outbuilding. Herold surrendered immediately; Booth defied the troops, offering to fight them one by one. Instead the troops set fire to the barn, and they saw Booth inside, using a crutch to stand erect. A bullet felled Booth, but whether he shot himself or was mortally wounded by one of the soldiers, Sergeant Boston Corbett, has never been completely resolved. Booth died at about seven o’clock, his last words being, “Tell Mother I died for my country.”

The troops returned the body to Washington and a secret burial at the Arsenal Grounds. A confusing, disorganized trial—a travesty of judicial procedure—ensued. Eventually the government hanged Herold, Payne, Atzerodt, and Mrs. Surratt (who may have known nothing of the plot). Mudd, Arnold, and O’Laughlin received life imprisonment.

Edwin Booth petitioned the government to return John Wilkes Booth’s body to his family; on 20 February 1869 the body was buried in an unmarked grave in the Booth lot (Dogwood Number Nine) in Green Mount Cemetery in Baltimore, after identification by several friends and acquaintances. Nevertheless rumors abounded that Booth had escaped, and later a mummified body advertised as Booth’s appeared on exhibition around the country. A popular fiction held that Booth committed suicide in 1903 in Enid, Oklahoma, where he was known as David E. George.

Scholars and historians who have examined the evidence carefully agree Booth died at Garrett’s farm. Many maintain that by murdering Lincoln, who could have overseen Reconstruction with mercy and justice, Booth struck a staggering blow at his own beloved South. Whatever the case, the first presidential assassination in America forever branded the Booth name with infamy.

Archival materials on Booth include those in the War Department Records, the Kimmel collection in the Merl Kelce Library at the University of Tampa, and the Library of Congress. Other substantial Booth material appears in biographies of his brother Edwin or the Booth family in general, as in Stanley Kimmel, The Mad Booths of Maryland (1940; rev. ed., 1969), Eleanor Ruggles, Prince of Players (1953), and Gene Smith, American Gothic (1992). Booth’s sister, Asia Booth Clarke, gave her brother individualized treatment in The Unlocked Book: A Memoir of John Wilkes Booth (1938), richly detailed if undeniably subjective. Less trustworthy is Izola Forrester, The One Mad Act: The Unknown Story of John Wilkes Booth and His Family (1937). See also Clarke, The Elder and the Younger Booth (1882), Francis Wilson, John Wilkes Booth: Fact and Fiction of Lincoln’s Assassination (1929), and Philip Van Doren Stern, The Man Who Killed Lincoln (1939). William A. Tidwell (with James O. Hall and David W. Gaddy), Come Retribution (1988), speculates on the Confederacy’s involvement in the assassination. John Lattimer, Kennedy and Lincoln (1980), offers detailed examinations of both assassinations. For Booth’s theatrical career, see Gordon Samples, Lust for Fame: The Stage Career of John Wilkes Booth (1982). Also see Robert Silvester, United States Theatre: A Bibliography from the Beginning to 1990 (1993), pp. 168–70.