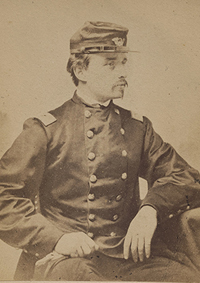 Shaw, Robert Gould (10 October 1837–18 July 1863), soldier, was born in Boston, Massachusetts, the son of Francis George Shaw, a merchant and social reformer, and Sarah Blake Sturgis, an abolitionist. Shaw was born into one of the wealthiest families in the country, linked by marriage to Boston merchant dynasties such as the Cabots and Russells. The Shaw home sat next to George Ripley’s utopian community Brook Farm in West Roxbury, Massachusetts, and was a gathering spot for abolitionists and reformers.

Despite a stern upbringing, Shaw’s early life was one of privilege, fun, and security. He had many cousins to play with and attended Miss Mary Peabody’s school. His extended family encompassed eighty-five first cousins and twenty-three aunts and uncles, most of whom lived in the Boston area. In 1847 his family moved to Staten Island, New York. The move upset young Shaw, and the nine-year-old clung to his mother. Adding to his melancholy, he was placed in Herr Marschalk’s private school on Staten Island, which he hated. Upon the advice of his uncle, Joseph Coolidge Shaw, a devout Jesuit, the Shaws then sent Robert to a Catholic boarding school, St. John’s College at Fordham. The Shaw letters reveal a young child feeling rejected by his parents. His behavior deteriorated, and he ran away from St. John’s twice. Each time, at the urging of his mother, he was returned by his father.

In January 1851 Shaw’s father took the whole family on a tour of Europe. Placed in Monsieur Roulet’s private school in Neuchâtel, Switzerland, Shaw began to challenge his mother’s stern abolitionism and her expectations for him. He wrote to her that he did not “see how one man could do much against slavery… . I don’t want to become a reformer, an apostle, or anything of that kind.” Horrifying his mother, Shaw stated that he planned to join the army, for, as he explained, “what else can I do? … I don’t want to be a merchant, or Doctor, or minister, or anything like that” (Shaw, Letters 1864, pp. 40, 15–16). At age sixteen, Shaw left Neuchâtel for Hanover, Germany, to continue his studies. In Hanover he drank heavily, gambled, and found himself in constant debt.

In 1856 Shaw returned to the United States to begin college. He preferred to attend Columbia or New York University so he could be close to his family. They insisted, however, that he enter Harvard. Crestfallen, he spent two lackluster years there. Ranking in the bottom third of his class and with severe disciplinary problems, he left Harvard for good in 1858. Returning home, Shaw took a job at his uncle’s Manhattan mercantile firm, H. P. Sturgis and Company. For two years he worked in the counting room. Shaw showed no enthusiasm for his work and admitted to a friend that he felt enslaved by his job. At age twenty-two, Shaw viewed his life as a failure.

The outbreak of the Civil War in 1861 provided the young aristocrat with a new lease on life. Serving first as a private in the Seventh Regiment New York National Guards and then as a second lieutenant in the Second Massachusetts Infantry, he distinguished himself as a soldier. Shaw was wounded twice and miraculously survived the bloody encounters at Antietam and Cedar Mountain. He loved the military and seemed to have finally found his calling. In August 1862 he received a captain’s commission in the Second. Also that year Shaw secretly became engaged to a wealthy New Yorker, Annie Kneeland Haggerty. Against his mother’s wishes, Shaw married her in 1863; they had no children.

After the Emancipation Proclamation of 1863, Massachusetts governor John Andrew hurried to organize the North’s first “colored” volunteer regiment, the Fifty-fourth. With abolitionist parents and a sound military record, Shaw was Andrew’s first choice to lead the new regiment. Without hesitation, Shaw refused the commission. Never considering himself an abolitionist, he did not want the responsibility of leading the much-publicized first black regiment raised northeast of the Mississippi. Deeply ashamed, his mother wrote to Andrew that her son’s decision caused her the “bitterist [sic] disappointment.”

After a barrage of telegrams and enormous pressure from his mother, Shaw changed his mind reluctantly and accepted the colonelcy of the Fifty-fourth. In February 1863 Shaw supervised the training of African-American volunteers. “Shaw’s method,” explained second in command, N. P. Hallowell, “was the method of coercion… . The unruly members … were stood on barrels, bucked, gagged and, if need be, shot” (Hallowell, p. 33). In May the untested regiment was sent to Hilton Head, South Carolina. The Fifty-fourth’s first engagement proved an embarrassment to Shaw and his men. Despite Shaw’s objections, the regiment took part in the burning of the undefended port town of Darien, Georgia.

On 16 July the Fifty-fourth had the opportunity to recoup its self-esteem when Confederate forces waged a surprise attack on James Island, South Carolina. A group of 250 members of the Fifty-fourth held off repeated assaults, giving the Federal troops time to organize a defensive retreat. Two days later, on Morris Island, Shaw proudly volunteered his regiment to lead the assault on the impregnable Fort Wagner, the first step in an offensive on the Confederate stronghold of Charleston, South Carolina. When the Fifty-fourth charged the fort, 272 were killed, wounded, or captured. One of those who fell was Shaw. Although the assault failed, the bravery of the Fifty-fourth proved the ability of African-American troops in battle. In death, the young Shaw was ennobled as a martyr to freedom and as a symbol of enlightened sacrifice. He and the Fifty-fourth were later memorialized by Augustus Saint-Gaudens's mythic monument placed on the Boston Common.

Shaw’s letters and papers are in the Houghton Library, Harvard University; the Massachusetts Historical Society; and the Rare Books and Manuscripts Division of the New York Public Library. Many of these have been edited and published in Robert Gould Shaw, Letters: RGS (1864), which provides letters from Shaw’s early life, and Letters: RGS (1876), which holds his wartime correspondence. Russell Duncan, Blue-Eyed Child of Fortune: The Civil War Letters of Colonel Robert Gould Shaw (1992), provides an excellent biographical sketch of Shaw’s early years as well as an annotated compilation of his letters during the Civil War. Shaw’s only modern biographer is Peter Burchard, One Gallant Rush: Robert Gould Shaw and His Brave Black Regiment (1965). Thomas Wentworth Higginson, “Robert Gould Shaw,” in Harvard Memorial Biographies, vol. 2 (1866), offers a useful contemporary account of Shaw’s life. George M. Fredrickson, The Inner Civil War: Northern Intellectuals and the Crisis of the Union (1965), devotes a chapter to Shaw that brilliantly traces the changing meanings Shaw’s death symbolized for northern intellectuals. For information on the Fifty-fourth Regiment, see Luis F. Emilio, A Brave Black Regiment: History of the Fifty-fourth Regiment of Massachusetts Volunteer Infantry, 1863–1865 (1891). Joseph T. Glatthaar, Forged in Battle: The Civil War Alliance of Black Soldiers and White Officers (1990), provides an in-depth analysis of the relationship between African Americans and whites within the Union army. Norwood Penrose Hallowell, Selected Letters and Papers of N. P. Hallowell (1896; repr. 1963), provides a contemporary’s account of Shaw and the Fifty-fourth.