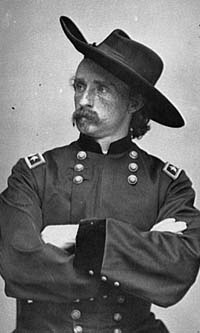 Custer, George Armstrong (05 December 1839–25 June 1876), Civil War general and Indian fighter, was born in New Rumley, Ohio, the son of Emanuel Custer and Maria Ward, farmers. Reared in the rough-and-tumble environment of a large, rural family, “Autie” was a strapping, energetic youth who enjoyed hunting, fishing, and practical jokes and valued romantic novels over academic studies. From his family he acquired a strong affinity for Methodism and the Democratic party. Custer was educated at Stebbins Academy in Monroe, Michigan, where he lived part time with a half sister, and at McNeely Normal School in Hopedale, Ohio, and then taught briefly at two country schools in Ohio before winning, at age seventeen, an appointment to the U.S. Military Academy at West Point. Entering in June 1857, he graduated four years later, at the outbreak of the Civil War. His academic and conduct record at West Point was as dismal as his record in the combat arts was outstanding. Graduating at the foot of his class of thirty-four, he was commissioned second lieutenant in the Second U.S. Cavalry in time to take part in the first battle of Manassas.

Custer found his calling in the Civil War. Two years of staff duty, including a tour as aide to General George B. McClellan (1826–1885), established his military skill, both as a staff officer and in combat. So impressed was General Alfred Pleasonton, commander of the Cavalry Corps of the Army of the Potomac, that he recommended Custer for promotion. In June 1863 Captain Custer was appointed brigadier general of volunteers and given command of the Michigan Cavalry Brigade. At twenty-three, he was the youngest general in the Union army. Almost instantly General Custer made a dazzling name for himself. On the third day of Gettysburg the Michigan Brigade played a key role in turning back General J. E. B. Stuart’s Confederate cavalry, which threatened the Union rear at the very moment of George Edward Pickett’s charge on the Union center. Thereafter Custer’s successes accumulated one after another. He became known throughout the army for smashing cavalry charges, for heedless bravery, for tactical brilliance more instinctive than cerebral, for heavy casualties, and, with long yellow hair and gold-bedecked black uniform, for personal flamboyance. Newspapers made him a household name. Throughout his life an incurable romantic, Custer took special pleasure in the opposite sex. In 1863 he married Elizabeth Clift Bacon (Elizabeth Clift Bacon Custer). Although the marriage has come down to posterity as one of history’s most idyllic, it went through periods of stress, almost certainly including infidelity on his part. There were no children.

When Ulysses S. Grant began his campaign against Richmond in the spring of 1864, General Philip H. Sheridan took command of the Cavalry Corps. In the battle of the Wilderness and the cavalry’s raid on Richmond, Sheridan came to admire Custer’s qualities, while Custer formed a lifelong loyalty to Sheridan. For the rest of his career, Custer benefited from Sheridan’s patronage. Sheridan’s campaigns in the autumn of 1864 to rid the Shenandoah Valley of Confederate forces catapulted Custer to military stardom. At Winchester and Cedar Creek, he led cavalry charges that triggered the collapse of the Confederate lines. Winchester earned him command of the Third Cavalry Division, and Cedar Creek brought him a brevet of major general, which allowed him to don two stars at the age of twenty-four. At Waynesboro, in advance of Sheridan’s army, he seized the initiative and launched an attack that all but destroyed General Jubal Early’s army. In the final campaigns of the war, Custer continued to add to his renown. At Dinwiddie Court House and Five Forks, and in the pursuit of Robert E. Lee’s army from Petersburg to Appomattox, Custer and the Third Division won a string of victories and finally, at Appomattox Station, blocked the further retreat of the Confederate army. On the morning of 9 April 1865 the white towel signifying Lee’s wish to meet with Grant was borne to General Custer. Sheridan bought the table on which the surrender was signed and presented it to Libbie Custer.

Had Custer been killed at Appomattox, he would be remembered as a great cavalry general, second only to Sheridan among Union horsemen. His tactical moves were nearly always correct and instantly executed. None excelled him in personal courage or individual battlefield combat. His casualty rates, however, gave him a reputation for recklessness, while his youth, his promotion from captain to general, his ostentation, and his heroic public image aroused jealousy and ridicule. After a brief tour in Louisiana and Texas, Custer was mustered out of the volunteer army and reverted to his regular rank of captain. With the expansion of the regular army in 1866, however, he won the lieutenant colonelcy of one of the new regiments, the Seventh Cavalry. With Sheridan’s help, he was brevetted major general in the regular army. Thus, as with most other high-ranking officers who remained in active service, “General” Custer served in the actual rank of lieutenant colonel.

As an Indian fighter on the Great Plains, Custer made a new name for himself, one that eclipsed even his image as the “Boy General” of the Civil War. He began his new career inauspiciously with a clumsy performance in General Winfield S. Hancock’s campaign of 1867 against the Cheyennes in Kansas, which culminated in a court-martial. Found guilty of a series of charges stemming from misconduct in the field, Custer was suspended from rank and pay for one year. On application of General Sheridan, however, he returned before completing the sentence and quickly scored a notable victory over Black Kettle’s Cheyennes at the battle of the Washita in November 1868. Although immediately controversial because of the killing of women and children, the Washita established Custer’s reputation as an Indian fighter. Assigned to the northern Plains in 1873, he took part in the Yellowstone Expedition, which guarded surveyors of the Northern Pacific Railroad. Two more victories, now against the Sioux, added luster to his name. In 1874 Custer led the Seventh in an exploration of the Black Hills of Dakota. Miners with the column found gold, and the ensuing gold rush laid the groundwork for the final chapter of his life.

By 1875 Custer was widely admired as the nation’s foremost Indian fighter. He boasted a solid record, but the fame came as much from newspaper attention and from his own writings. He published a series of magazine articles and then consolidated them into an autobiography, which reached a large audience. Custer’s final campaign, ending in the battle of the Little Bighorn on 25 June 1876, earned him immortality and a place in the national folklore. The disaster, low point for the army in the Great Sioux War of 1876, occurred when the Seventh Cavalry attacked a large Sioux and Cheyenne encampment on Montana’s Little Bighorn River. Five companies under Custer’s immediate command, more than two hundred officers and troopers, were wiped out by nearly two thousand warriors defending their families. The remaining seven companies of the regiment, under Major Marcus A. Reno and Captain Frederick W. Benteen, successfully defended an entrenched hilltop for two days until reinforcements arrived.

At once the subject of bitter controversy, “Custer’s Last Stand” has been vigorously debated ever since. Custer has been charged with recklessness, Reno with cowardice, and their superiors with faulty strategy. Defenders ensure that the arguments will endure forever, as will the image of the doomed but heroic figure of Custer facing death on a hilltop. In large part, however, the soldiers lost because the Indians won—although in victory lay the seeds of their ultimate defeat.

Custer’s letters and other papers exist in the Marguerite Merington Collection at the New York Public Library and the Yale University Library, as well as in the Elizabeth B. Custer Collection at the Little Bighorn Battlefield National Monument, Mont. Among many biographies are Robert M. Utley, Cavalier in Buckskin: George Armstrong Custer and the Western Military Frontier (1988), and Jay Monaghan, Custer: The Life of General George Armstrong Custer (1959). The Civil War years are treated in Gregory J. W. Urwin, Custer Victorious: The Civil War Battles of General George Armstrong Custer (1983). Custer’s autobiography is My Life on the Plains; or, Personal Experiences with Indians (1874). Three autobiographical volumes by Custer’s widow added greatly to the Custer legend: Boots and Saddles; or, Life in Dakota with General Custer (1885); Tenting on the Plains; or, General Custer in Kansas and Texas (1887); and Following the Guidon (1890). For the legend, consult Bruce A. Rosenberg, Custer and the Epic of Defeat (1974). For the Sioux campaign of 1876 and the battle of the Little Bighorn, see John S. Gray, Centennial Campaign: The Sioux War of 1876 (1976), and Custer’s Last Campaign: Mitch Boyer and the Little Bighorn Reconstructed (1991).