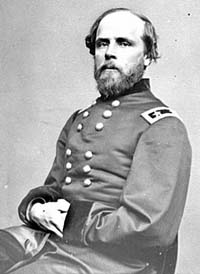 Couch, Darius Nash (23 July 1822–12 February 1897), soldier, was born in the town of Southeast, Putnam County, New York, the son of Jonathan Couch, a farmer. His mother’s name is unknown. Couch entered the U.S. Military Academy at West Point on 1 July 1842 and graduated thirteenth of fifty-nine in the class of 1846. He served as a lieutenant of artillery in the Mexican War and received one brevet promotion on 23 February 1847 for gallantry and meritorious conduct at the battle of Buena Vista. At the conclusion of the war Couch served at various posts on the East Coast, including brief service in 1849 against the Seminole Indians in Florida. In 1843–1854 he collected zoological specimens for the Smithsonian Institution as part of a surveying expedition in northern Mexico. Couch married Mary Caroline Crocker in 1854, and on 30 April 1855 he resigned from the army and took employment with a Massachusetts copper company owned by his wife’s family.

Couch reentered the army on 15 June 1861 as colonel of the Seventh Massachusetts Infantry. He escorted his regiment to Washington, D.C., in July and there received an antedated promotion to brigadier general of volunteers, effective 17 May 1861. He was assigned as a brigade commander in Major General George B. McClellan’s Army of the Potomac. During the Peninsula campaign of March–August 1862, Couch led a division of the IV Corps that saw heavy fighting in front of the Confederate defensive lines at Williamsburg, Virginia. Couch’s division was the first to discover that the enemy had evacuated the line during the predawn hours of 6 May. During the battle of Fair Oaks on 1 June 1862, Couch’s division maintained itself without reinforcements against superior numbers and retired in order only after receiving positive orders. His division also held a large portion of the Federal line at Malvern Hill on 1 July. For his adept handling of troops in battle during the campaign, Couch was promoted to major general of volunteers on 4 July 1862.

In the latter months of 1862 Couch assumed command of the Army’s II Corps headquartered at Harpers Ferry, West Virginia. Although portions of the II Corps saw action at the battle of Antietam, Maryland, on 17 September 1862, Couch arrived with additional troops too late to join in the fighting. At the battle of Fredericksburg, Virginia, Couch’s corps crossed the Rappahannock River by pontoon boats under enemy fire on 11 December 1862 and participated in the doomed assault on Marye’s Heights on 13 December. Always known for his blunt, succinct statements, Couch signaled Major General Ambrose E. Burnside: “I am losing. Send two rifle batteries.”

In February 1863 Couch became the senior corps commander of the Army of the Potomac, now commanded by Major General Joseph Hooker. On the final day of the battle of Chancellorsville (1–4 May 1863), Couch was summoned by the disabled Hooker to take command of the army and withdraw it. Hooker’s inept performance and rash statements during the fight were not lost on his senior commander; after the battle Couch wrote that “it hardly seemed possible that a sane General could have talked in this manner” (unpublished letter). Couch asked to be relieved from further duty under Hooker and scoffed at the suggestion of President Abraham Lincoln that he himself be placed in command. Couch did not desire to have an army command, and he furthermore looked forward to serving under Major General George Meade, whom he suggested as Hooker’s replacement.

In view of the threatened invasion of Pennsylvania, the Department of the Susquehanna was formed on 11 June 1863, with Couch as its commander. Within a few days Confederate cavalry entered the state, and Couch turned to the task of assembling 37,000 volunteer and militia troops to meet the emergency. During the next three weeks, units of Couch’s department repeatedly engaged Confederate forces during the Gettysburg campaign. Remaining in command of the department after the Confederate invasion, Couch was in charge of ceremonies at the national cemetery during which Lincoln delivered the Gettysburg Address on 19 November 1863. During the next twelve months Couch continued to organize the Pennsylvania militia for the state’s defense.

In December 1864 Couch was ordered to Nashville, Tennessee, to command a division in the hastily organized army of Major General George H. Thomas. Couch led the division during the battle of Nashville on 15 and 16 December 1864. At war’s end he was a division commander with Major General William T. Sherman’s army in the Carolinas. He resigned from the army on 26 May 1865.

Couch ran unsuccessfully as the Democratic candidate for governor of Massachusetts in 1865. Following that he served briefly as collector of the port of Boston, but his appointment was not confirmed by the Republican Senate. He then turned away from politics and served as president of a manufacturing and mining company in Virginia. He moved to Norwalk, Connecticut, in 1870 and became quartermaster general of the state from 1876 to 1878; he was adjutant general of the state of Connecticut in 1883. Couch died at Norwalk.

Couch is best remembered as an able division and corps commander in the Army of the Potomac. His career occasionally was marred by personal traits of impatience and temper directed at both subordinates and superiors. He also suffered from prolonged bouts of ill health, which led to his acceptance of the post of department commander. Although in this administrative position Couch greatly aided in the repulse of the Confederate invasion of Pennsylvania, he undoubtedly would have performed greater service as a commander in the field.

The Couch papers covering the period 1861–1872 are housed in the manuscript collections of the New York Public Library. Couch wrote two accounts of his wartime experiences for Robert Underwood Johnson and Clarence Clough Buel, eds., Battles and Leaders of the Civil War (1884). These monographs cover the battles of Fredericksburg and Chancellorsville. Couch’s war dispatches and correspondence are in The War of the Rebellion: A Compilation of the Official Records of the Union and Confederate Armies (128 vols., 1880–1901). A biographical sketch is William Farrus Smith, “In Memoriam of General Darius Nash Couch,” Bulletin of the Association of Graduates of the Military Academy (1897). A close examination of his best year in combat is in Francis A. Walker, History of the Second Army Corps (1886). A substantive report on Couch’s death is in the New York Times, 13 Feb. 1897.